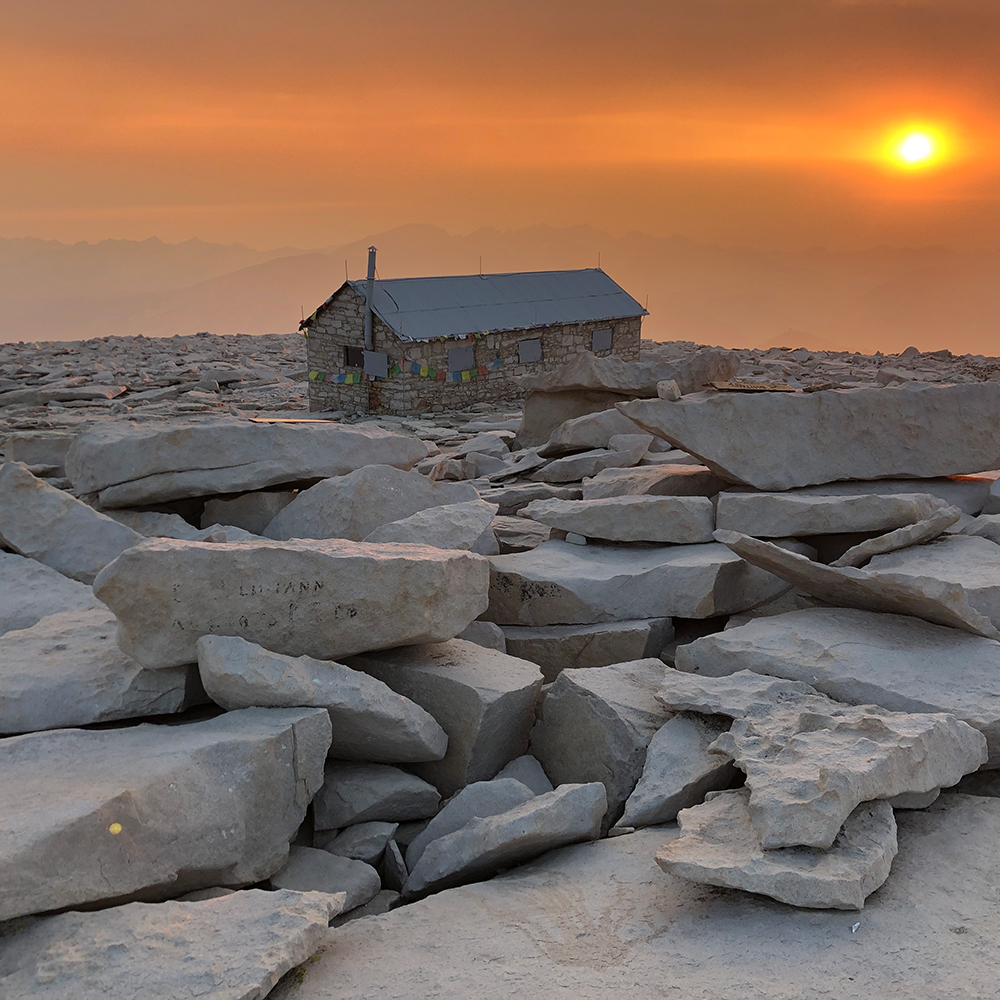 In 2013 I started an annual tradition of sleeping on top of the tallest mountain. I don’t know why, but year after year I went up. Pressure built to go up again the next year, and so on. These extended 14er summits were not easy for the obvious reasons, but almost every time it ended up being harder than hard because of surprises at the top.

2013: I had no idea what I was doing. It was very hard to get up that strange hill, especially since the notorious PCT clown Guino had dosed me with 200mg caffeine that morning (I’m caffeine-free). But it turned out to be bizarre and romantic, with a sunset and a sunrise akin to something you’d see on Star Trek. Kitten, King Street, Busted, and me, Puppy. And some Fireball liquor. We watch the sunrise bundled in our sleeping bags, and then stumble off to Canada.

2014: A PCT junkie withdrawing in the cabin with his PCT tweaker girlfriend, and my awful boyfriend who chose to bunk with them instead of cuddle puddle with me to stay warm. I honestly thought I would die of the cold. Turns out I had friends 20 yards away, cuddled in a pile, and my boyfriend knew but failed to tell me. Next time anyone does this to me, they’re instantly dead to me. No second chances.

2015: Oct 9. A decent year, except Lighthouse, Abram, and I summitted in 3′ of snow, straight up the chute sharing my microspikes with Abram. I ran down through/despite the ice.

2016: June 26. I’m falling asleep, it’s around 8. So delicious, feels so good, nnnnM, I’m so cozy in the cabin. Then I hear shouting, and see headlamps darting about. Three climbers arrive loudly clanging, without any overnight gear. They borrow quite a bit of my gear, shiver loudly all night, and all I get is a handshake in the morning. You’re welcome, guys.

Oct 13. A very cold night with my good friend Pepperflake and a stranger called Princess at UBS, then a summit in the morning via the Mountaineers Route. I talked them out of doing the climb after dark, and they agreed once seeing it in the morning that was a wise decision.

2017: Sept 15. A relatively uneventful night, except some people at the summit at sunset believe it’s reasonable to take a 10 year-old down the Mountaineer’s Route with them after dark. I let them go and feel almost guilty for not convincing them to stay in the cabin.

2018: May 25. I walk over Trail Crest without summiting. Who does that? Well, it’s a pass, and you don’t HAVE to climb Whitney just because it’s there.

Sept 22. Two people arrived to the summit unprepared at sunset, some unwanted touching while trying to keep one of them warm, some caca on my sleeping bag when he defecated due to high altitude cerebral edema (HACE – deadly), and myself coordinating a helicopter ride out for him starting at sunset and not ending until after noon the next day. I’m not sure what became of this man.

2019: Sept 24. Five people arrived to the summit after sunset. The guided (?) group split and a few of them decided to descent the Mountaineer’s route AFTER DARK, leaving the rest of them to eat and drink and enjoy the warmth of my food and gear all night. I was angry. I told them off in the morning, saying “I hope you guys don’t count this as a successful summit. Because it isn’t. A summit is getting up AND GETTING BACK DOWN.” The Leave No Trace ethic includes principles not only about preparing but also about being respectful of your fellow travelers. It’s not my job to rescue everyone, but I’m starting to feel like that’s my burden when I go up Whitney. What gives?

2020: I’ve thought about it. I have a plan. I will hide in the rocks. I will hide in the rocks even if something seems to be going wrong. The local Sheriff deputy has given his blessing. And if I have a quiet night on whitney, I will be free of the curse that was this annual ritual. I won’t have to go up anymore. Three people had followed me up without overnight gear despite my protests, but they managed to at least turn around. (Why don’t more people see summiteering as a ROUND TRIP endeavor?) Three more people arrived after sunset in thick smoke and somehow took pictures for an hour. They ask me to take their photo and I say no. Saying no is awesome, it turns out!

Later yet another group arrived, and I wasn’t sure what was going on. I heard mumbling, then it got quiet. Were they descending? People die descending in the dark. They sometimes walk right off the mountain. It was like I was being tested; more and more people seemed to arrive in the dark. I hid in the rocks to avoid any drama. I was shocked. This was next level. Three groups after dark? In thick smoke? Am I on Candid Camera?

I fell asleep and slept lightly. I was cold, and the wildfire smoke was steel wool. If I stood up I could see the terrifying, incomprehensible image of the forest burning to the south, like looking into the pit of a campfire: red embers and shooting flames. But it was the forest, not a campfire. The next morning I evacuated wearing three layers of mask over my face. The smoke was bad and getting worse. Yet other people continued to pour in, pushing upward. I asked an older guy inching along why he was choosing to harm himself by continuing up.

I laughed. I suppose it had been my obsession, too.

I fibbed and said, “Well, I’m a nurse, and I’m evacuating.” (I’m a retired nurse.) Exercising in wildfire smoke is SO BAD FOR YOU. And guess what? Whitney will be there waiting for you FOR A LONG TIME. Frankly, your well-being should be an obsession for you. Mister.

Shortly after a confounding conversation with the die-hard peakbagger, I met some climbers. I warned them they could go up, but there wouldn’t be any views because the smoke. The young woman said,

“Well, if views aren’t your reason for going up it doesn’t matter…”

OK. I’m done. Why not just climb some tenement and visit a windowless apartment? I get it I suppose, the woman was a climber — the ropes and anchors type — and the point for her was topping out, not the views. But her words shattered me. I bowed my head and quickly ducked off that mountain.

What had it earned? What has the tallest mountain earned? 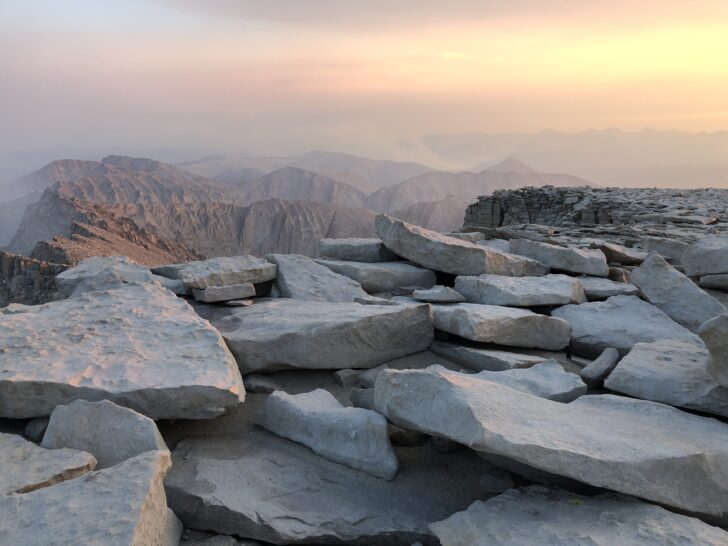 I have witnessed three behaviors evolve on the summit of Whitney since 2013. Perceptible changes in a short time. Since thru-hiking. Since social media. Since I’m not sure what confused people so much about how mountains are sacred.

I’ve seen far to many people make the summit, quickly take dozens of selfies with a cardboard sign, and then turn around and go back own without even really looking at the view. More and more each year, to the point where it’s saddening to a dizzying degree. Each year I experience less and less elevation sickness at the summit. I feel more and more well, stronger and stronger as I approach the summit. But each year I feel more and more sick with the culture at the top.

And so I’ve decided to free myself from the curse of the tallest mountain.

I will find reverence on another, shorter mountain.

A mountain which isn’t a highpoint, a mountain off the bucket listers’ radar.

A mountain where I can summit in peace, and stop, and enjoy the view in peace, and not worry about someone else falling off. Where I can breathe in the views, and exhale the frustration and irritation I find with the rat race, the arms race of being higher, being better, being more, having more, having more likes. I feel like I’ve really had all that. I’ve kept a lot of it to myself on purpose. I’ve seen such incredible things, and yet I’ve stopped sharing so much. I’ve kept it to myself to keep it safe. I’ve kept more to myself, I’ve kept more of my time to myself (by staying off social media, esp), and I’ve had more time to do even more. It’s a grave irony. The best parts of life are not to be found where so many people are looking. Or at least they’re not to be found how people are looking.

My mountain could be a molehill tomorrow. And I’ll love it.

Slow it down, do your inner research, do some outer research, learn what your own path looks like, and try to follow it. See what you find.

Update Sept 2021: I had another summit. The cabin is utterly wasted with graffiti. I couldn’t believe how much trash is left at the summit. Cigar butts and candy wrappers, toilet paper and other things… I didn’t spend the night.

If you Must Go Up Whitney

Being a Responsible Mountaineer

If you have to inconvenience other people (borrowing gear, food, water, or requiring any rescue) in order to get your summit, the glory of your summit does not belong to you. You have not earned it yourself. You have pulled an amateurish move (or had an accident), and should reassess your gear and skills. When attempting more difficult summits you should be prepared to rescue at least yourself.

The magic will happen when everyone is prepared to rescue at least themselves.