I subscribe to Wired Magazine in digital form, where I learn all sorts of neat things each day. This morning I spent over an hour watching a video produced by Wired, where an astrophysicist explains gravity to five people, ranging from beginner to expert. What a brilliant way of teaching/learning a topic, by helping someone realize how much they don’t know, and expanding on a concept bit-by-bit over an hour. (I was about at the grade-schooler’s level of understanding, haha, how far can you follow the concept? By expert level, my mind was blown.)

This afternoon, an opinion piece popped into the Wired newsletter. It’s right up my alley. If you’ve been reading my blog lately, you probably know I’ve been subjecting readers to an achingly long rant about conservationism vs. the modern “opt outside” movement…. about Leave No Trace (LNT) ethic vs. social media-style outdoor promotion. If you’ve read deeper into my thoughts about the Hayduke Trail specifically (and before that, the SHR), you know that I was starting to realize how trails were being put down, and how they began, and how it’s going wrong. 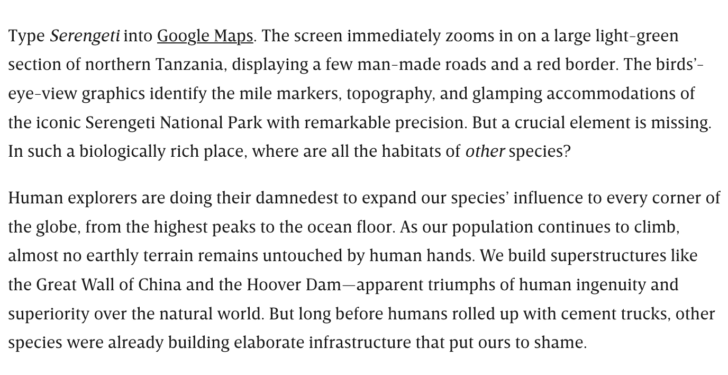 Huling makes his point well, and reminds me of something I feel is missing from all the long trail maps and apps: they rarely if ever mention anything about endemic species or natural history, much less any history.

And so, armed with these maps, which are essentially just lines cutting topo curves, we walk along fairly oblivious to our natural environment. Such feckless travelers, just sorta following someone else’s line, we are much more likely to cause damage to ecosystems without even realizing it.

What animal kingdom are we walking through?

In 2016 when I first made maps for the Hayduke (on principle I do not pay for or sell trail maps — the ones with lines), I added text balloons in the margins describing some of the history, animal life, and geology of the regions I’d be walking through. I would know what to watch for, and what to call it when I saw it. That became very meaningful to me. When I arrived, I was more situated in space, so to speak. It bonded me to the place.

As I hiked along that year, it dawned on me that most of the route was already in fact trail, and that many of our trails had been “inherited” (stolen, appropriated) from Native Americans, who themselves had likely built them while following ungulates. Often along that route I would notice how following cattle or deer track was easy and expeditious, and avoided ankle-busting and/or incredibly circuitous washes. I haven’t necessarily had this corroborated in my reading or talks with other hikers, but it seems like we ultimately inherit most our trails from animals. And all of our trails trammel, or at least intersect, their withering mating and feeding locations.

Yet another reason to pick an established route, define it, and stick to it. Perhaps a good reason to stick with the routes we have instead of continuing to transect and transect what little Wilderness is left with extremely difficult routes. Where can they be, where they can be let be?

I decided to quit thru-hiking a couple years ago, and had my last thru-hike last year. There’s just something that doesn’t suit me about the culture around it. I’ll definitely still go on long walks, but here are some things that I think thru-hiking could do without:

(One could look at this as less of a list and more of a progression, but I digress.) I struggle with these aspects of the thru-hiking community. But I still love backpacking.

So what anyway does thru-hiking have to do with backpacking? When I started to consider that, I realized that 30-mile days, starving, and wearing the same socks every day just wasn’t… fun. I wanted to backpack, carry three pairs of socks. Eat from cans. Show up late. When I thought about it even more, I realized that as thru-hikers flock to the major trails, backpackers are still enjoying some privacy on neglected trails around the USA. I suspect they’re having the experience, yet abbreviated, that many thru-hikers are killing themselves trying to find. I myself am done making it so hard. I will hike this year, but not for so many miles, and I’m gonna call it a backpacking trip. No end-to-end shit, just some walking and camping. In well-worn places that make me happy.

* Sharing someone else’s sacred space. Sharing something you hiked once, perhaps in an area you will never or rarely return to, and to which you have no ties. You will not help build trails when they are needed, you will not interface with local agencies, you will not be there to educate hikers who choose your path, and you will not be picking up litter, making trail repairs, or doing any interpersonal damage control in trail towns. Quite the legacy.