I just spent a couple of gloriously mild days in Life Valley, canyoneering and hiking, conversing with and admiring a lot of rock. The Valley also had quite a bit of water in it due to some recent storms, but this time of year the plants and animals have retreated and it’s time for the rock to shine. And there’s a lot of rock.

The Valley’s valleys, as they show (or don’t show) themselves from the car, are enshrouded, modest, and less-than-tantalizing by reputation. If one is brave and stupid enough to venture too far from the road on foot and with rope, they open in dizzying, hypnotic displays of color and texture, enfolding you. It’s not so much that they threaten to keep you against your will at that point, as that you threaten to stay against their will. Its subtle warning call to the outsider, “I have little water,” could be blithely ignored as the outsider drinks in the views thirstily.

Our first day out I was excited to find out whether the “cool blue narrows” we would find while dropping down a canyon were going to be “cool” blue narrows or “cool blue” narrows. Although extremely brief compared to some narrows I’ve visited (Luckspin comes to mind), they were indeed cool and they were also a cold steel blue color, limestone polished millions of time by brief and violent scourings. What was maybe cooler was discovering how rainstorms had completely removed previous canyoneers’ cairns and webbing anchors. Except one which was wrapped around a boulder the size of a washing machine and hidden downstream of it, all were gone, washed down with tons of debris. I think this would have happened in 2015, while Lighthouse, Abram and I were hiking across this Valley and others. That was a lot of rain! And so several years later we found the canyon fairly virgin, with traces of crow and bighorn sheep, but only that loop of webbing, and another piece of it sticking up from the gravel, its other end buried deep enough to prevent us digging it entirely out. The canyons are a bit like Etch-a-Sketches in a way, unless we just can’t keep our hands off them. 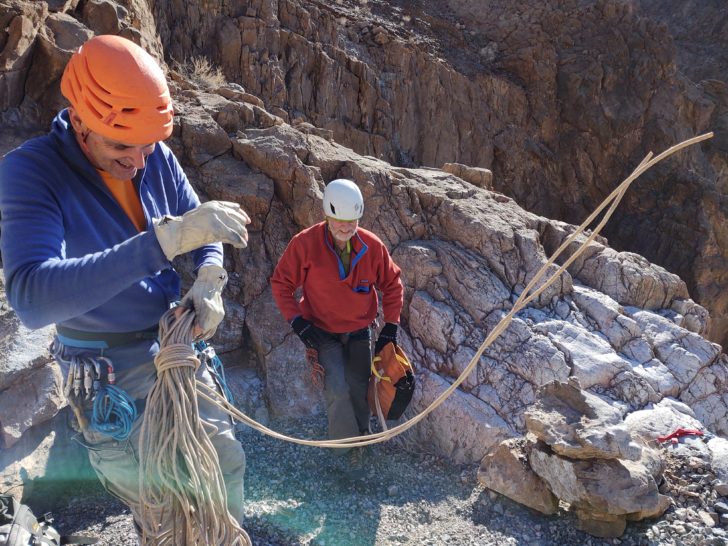 We couldn’t keep our hands off them. Since most all the anchors were gone or destroyed by ultraviolet, we needed to build six from scratch. I’m new to climbing and canyoneering, and don’t yet understand how folks in those sports lack compunction about drilling metal into rock and otherwise leaving behind metal pieces in natural places, often to only pass through once. We tend to think “it’s just me, just this one time,” but easily forget the other 7+ billion people on the planet saying the same thing. There just is no way to escape our footprint at this point, but we can consciously try to minimize it I suppose.

Heavy rainfall in the canyon had almost erased the footprint, but we put it back. My climber friends were more excited about that than I was, but then again, I can’t deny I was excited to go down. We re-used two maillons we found, but left behind three new ones, a good length of webbing, and a couple of nuts. Part of the fun of the trip was experiencing feeling “first,” and figuring out how to set up a few trustworthy cairn anchors. We rob the next people down that opportunity of that feeling (since it’s likely they’ll need to spend time assessing cairns — they’re pretty sketchy to consider). But it’s likely they’ll appreciate the work, especially if they’re in a hurry for some reason. I know I’ve found myself in some pretty sticky situations in canyons where had I found some webbing I wouldn’t have hesitated to take advantage — but had I not at all needed it, would have been annoyed. Definitely hypocritical, and my thoughts about all this are raw. Overall, I think moderation sorts out most things. 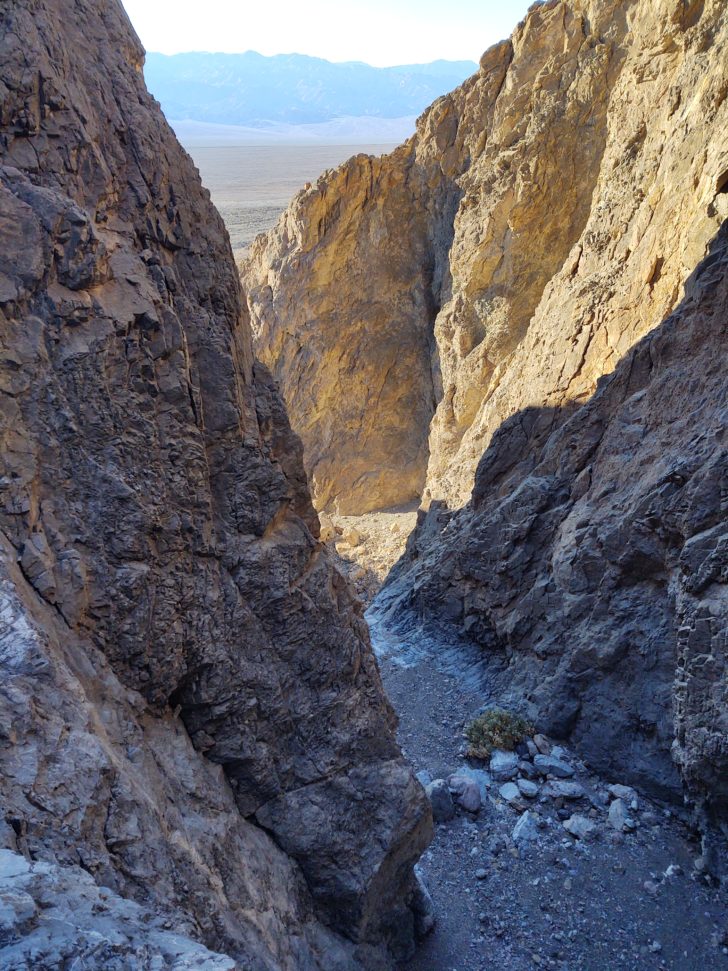 This year I dabbled in canyoneering and climbing; I so far prefer canyoneering. It makes sense since canyons tickle my fancy so much, and canyoneering involves a more natural-seeming downstream travel. I still don’t know much, though. I’ve only ever climbed four times, three of them this year, and two of them at Red Rocks, once in Yosemite. Lucky me, right? I’ve been lucky to go with professional guides every time. But the last time out climbing, I got a few pitches up, and discovered I have a serious problem with being lowered. It terrifies me! I just cannot stand the feeling of the ground abruptly falling out from below me. Strangely I’m fine with rappelling, so I guess as long as I have control of the rope, I’m ok with ground falling out from below me. I will focus on learning more about canyoneering for now because I think it will help me a lot in future Southwest canyon escapades.

The next day I was led into a closed canyon with 17 other curious folks, escorted by authorized guides past several signs warning of trespassing with severe penalty. Although the tour was fascinating — spectacular — I left feeling confused because of a simple transaction of rock/wood.

Our primary guide has been personally vested in the canyon for over twenty years as a paleontologist; his enthusiasm was contagious and we all eagerly followed him around, essentially looking at dents in sheets of mud. Aside, a kaleidoscopic canyon had enveloped us, and were the dents not interesting, the mounds above and beyond were. The guide led us off the normal tour loop in order to check on a tufa grouping he hadn’t seen in years. While people looked at the incredible uplifts and ungulate tracks preserved in dried mud several million years ago, I sat to rest. My left hand landed near what I immediately recognized to be petrified wood. As my boyfriend, a trained geologist, approached, I lost my confidence and asked him, then the tour leader who approached, if it “seemed to be petrified wood?”

It was petrified wood, and apparently a very unusual and special find. For scientists interested in timelines, it would ultimately be useful for dating the area whose profuse tufas had at one point provided a near-tropical oasis. An oasis surrounded by thirsty animals and lush palms. This wood was apparently not a species of palm as would have been expected, which made it unusual. In fact, it was not a familiar wood at all to the paleontologist, who took it from me grinning ear-to-ear, and pocketed it. For science.

Although I hold a college degree in science and have a certain reverence for the scientific method, my more recent re-entry into what I sense a more-animal-less-rational reliance on phenomenologic information has me wondering how the removal of artifacts by scientists is any more valid (or any less destructive) than their removal by collectors and vandals. How is one more valid than the other? Do all scientists gain access to this material? Could I ever see that piece of wood again? As David Roberts himself lamented in Lost World of the Old Ones* after “accidentally” sharing locations of several unknown archeological sites and setting off a ruthless culture of outdoor treasure hunting, and as Craig Childs detailed in Finders Keepers, scientists’ collective plunders are easily just as significant as those deemed “illegal,” and rarely re-enter into public view or original ownership.

What complicates thoughts about this Canyon as a psychic/scenic/scientific resource is the fact that as time goes by, some fossils are washed away, destroyed in storms and falls, or stolen, but other fossils are revealed as layers of earth literally peel back. It is quite literally a renewable resource. The National Park is fighting time and erosion (and their own ethos) with ideas of removing pieces to museums for posterity. Slipping on this slope, would the entire canyon eventually move indoors? “Slip it in their pocket,” as it were?

I wished I hadn’t pointed out the wood to anyone else. Why couldn’t I keep my mouth shut? Help keep a secret? I wondered how the paleontologist had spent so much time in the area, had in fact glued pennies to rocks nearby to help scale bird bones encapsulated in dried mud, without seeing any wood like this already. I sulked. My foray into Meetup-style hiking tourism had gone extra extractive because I saw something I wasn’t meant to see. Or more because I couldn’t keep my mouth shut.

On the way out we were reminded the Canyon has several cameras pointed in various directions, and that photographs of previous looters have been published in periodicals far and wide. We again passed the sign which threatened a $5000 fine or 6 months in prison for unofficial canyon visits.

I talked briefly with the paleontologist about how it’s hard for me because I sometimes find great pieces in the dirt, but must leave them behind. I subscribe to Roberts’ “Natural Museum” principle. I think the Leave No Trace ethic is fair. I am also minimalist, don’t like to carry around a bunch of rocks and stuff, and a bit superstitious as well.

He, a very likeable fellow, laughed as he said — and got my hopes up for a moment until he finished —

Yeah, if everyone took a rock home… all that would be left is a ton of rocks!

He’s right, but then why the cameras? Why the threatening sign?

The particular rock I had in mind was actually wood. Nobody will see petrified wood at that site again for a very long time (at least until after the next very big rains). If it falls out of his pocket, or becomes misplaced some other way, it will never be catalogued, photographed, sectioned, dated, stored or displayed. It’ll just be a lost little piece of wood with a very strange, indecipherable story.

* Ironically, in this book he tried to be more vague about another precious, very remote site, but after poring over maps and walking a long way into the desert, I easily found the site Roberts tried to describe without giving away. Whoops! (Place names changed in this post to protect the innocent.)