I topped out at Kanab Point, a very quiet and lonely place. I did consider introducing myself to the people truck-camped there, but got a definite vibe that it wasn’t the right time. It’s weird to have feelings like that, but I always listen to my gut. Probably a great idea when one is that remote, and without any rescue beacon. But it was good to know someone was there in case my tonsil decided to explode. And as I went through those thoughts in my head, the truck fired up and drove off, without so much as a backward glance.

People can be so weird in the desert. I know if I had flagged them down they probably would have helped, but it just seems like a desert courtesy to howdy do and ask if water is required. Must have been Oregonians or something. Anyway, good riddance. I had the view to myself: 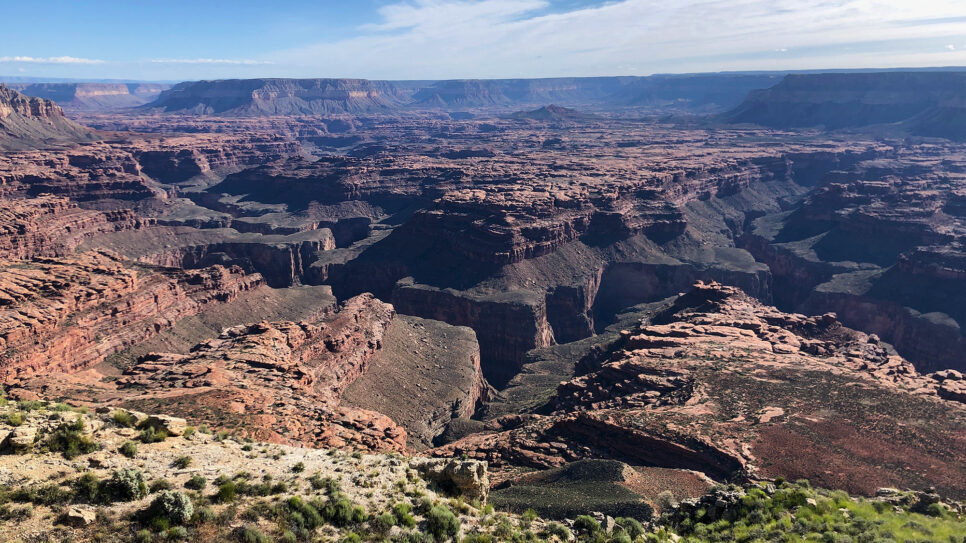 From Kanab Point, I followed well-trafficked dirt roads for a moment, then abandoned 4×4 track toward the northeastern reaches of Tuckup Canyon, hoping to be able to drop in there and descend to the petroglyphs. I wasn’t sure about any of it working out, but I was having a nice walk. Eventually the ancient narrow tracks faded (although they did keep picking up again, practically everywhere) and I was walking through this nice mixed forest. Unsurprisingly, or surprisingly since it’s National Park, most of this land is fenced off and sectioned for grazing, with watering holes. I did sense wildlife, but only saw birds. Here two crows harass a hawk: 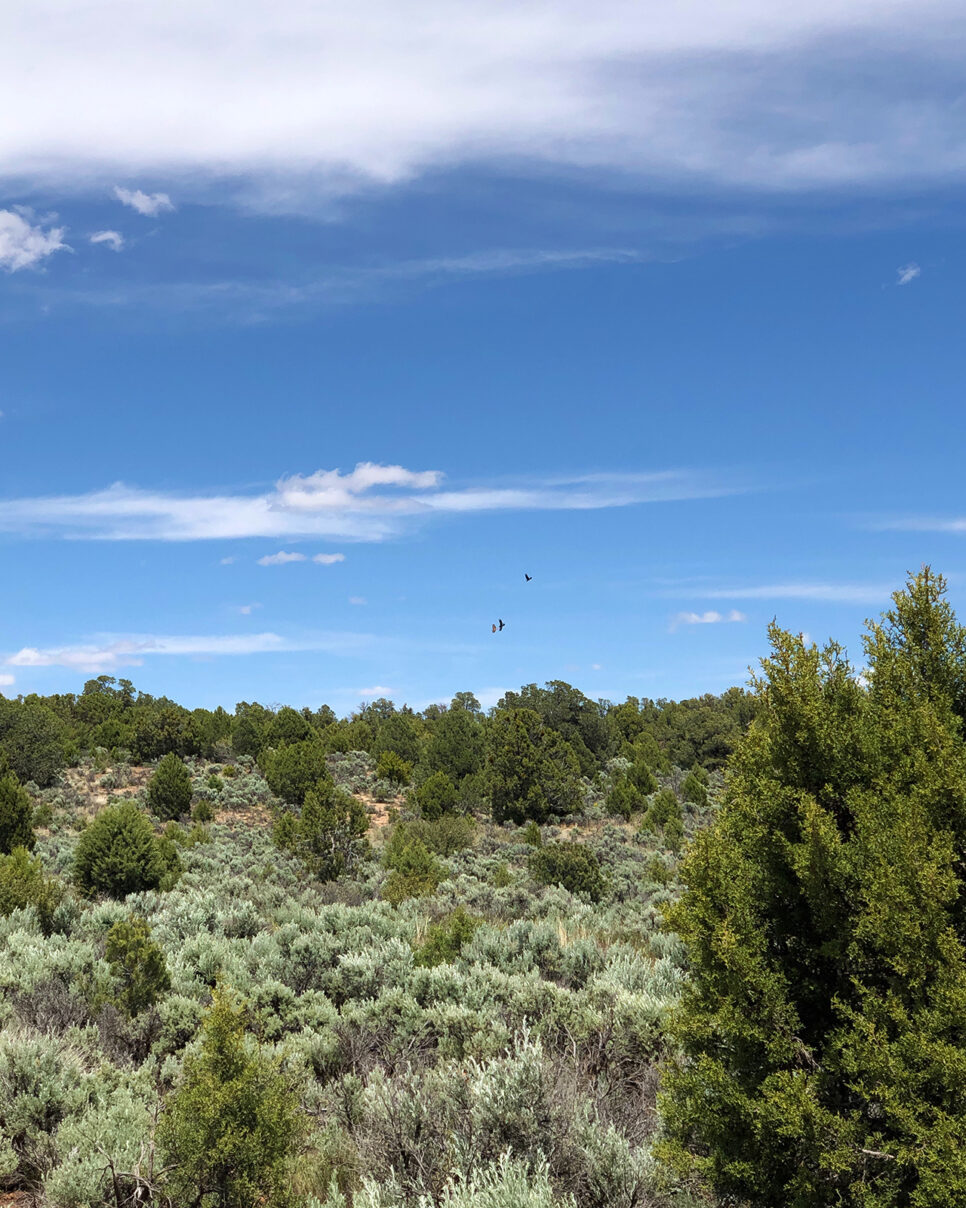 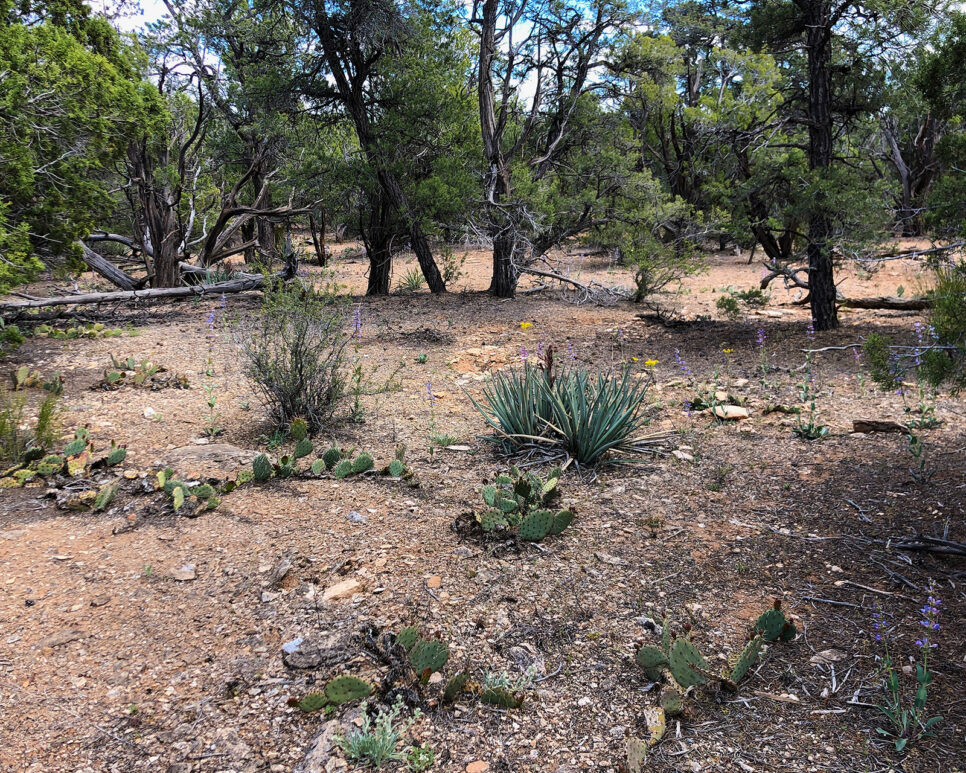 My plan was to drop into the northeastern head of Tuckup Canyon. I had scouted a couple decent routes by satellite, however, when I arrived the first one was an absolute hard no go. A 75′ dryfall blocked my way down the first option after having already descended a canyon’s less severe pour-overs for a while. Fun though – I found what must have been an ancient “coral reef” down there. A record of seabed life near the rim of the Grand Canyon. It reminded me how just a year or so prior I had been up the lower end of Tuckup Canyon a way to visit the Great Unconformity of Powell, where gazillions of years of time are represented in one thin sandwich of dirt layer. Or something. Archeology and history are not my strong suits, but I was and remain duly impressed by whatever all that means. 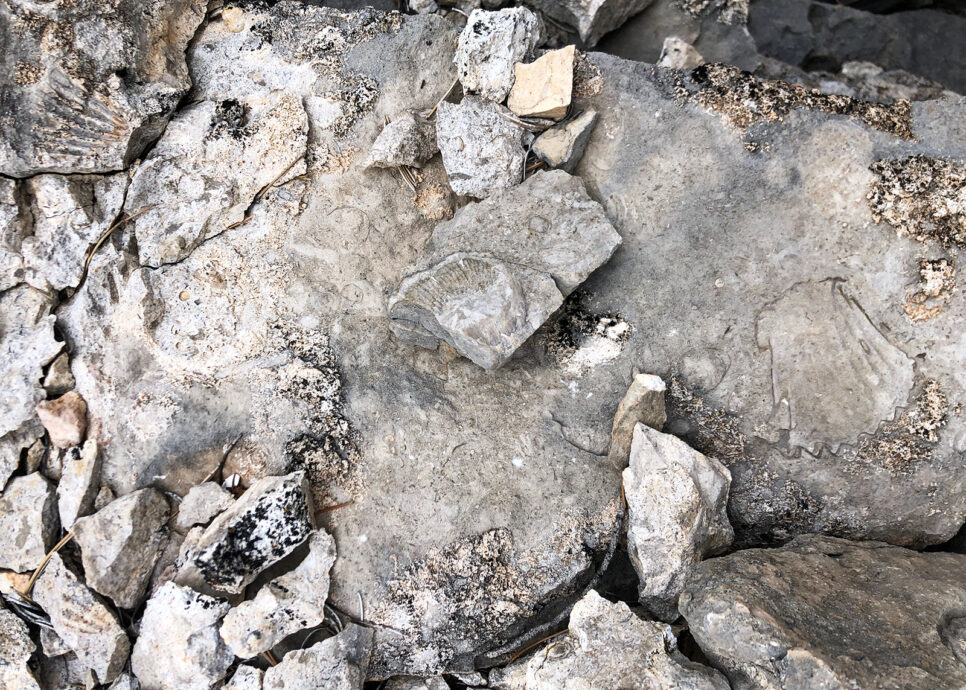 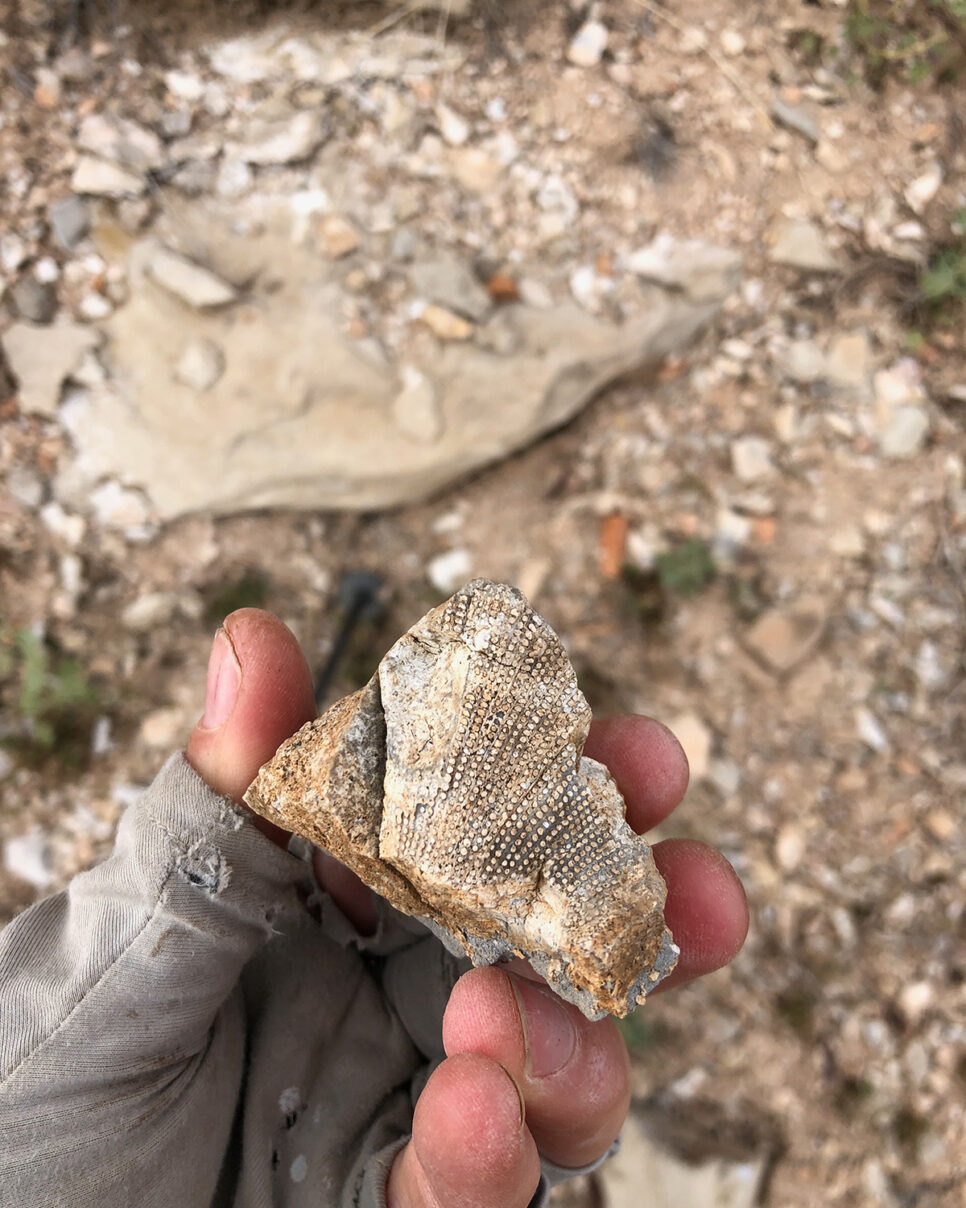 A fossil of Lacy Bryozoan, or “lacy coral,” which wasn’t actually ever a coral, technically. 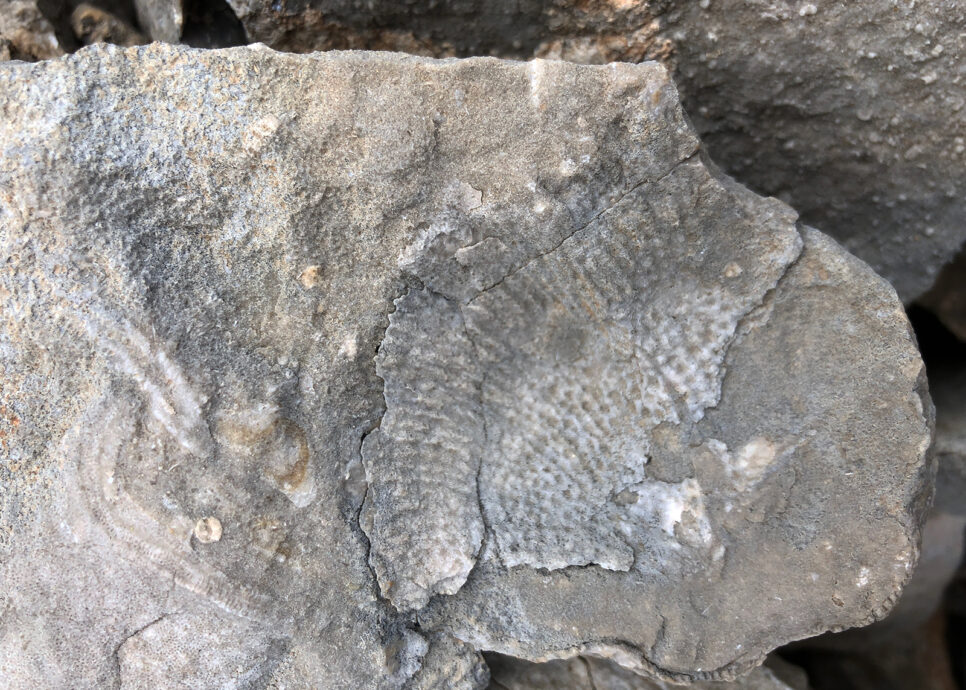 More Bryzoan and another unknown at left. 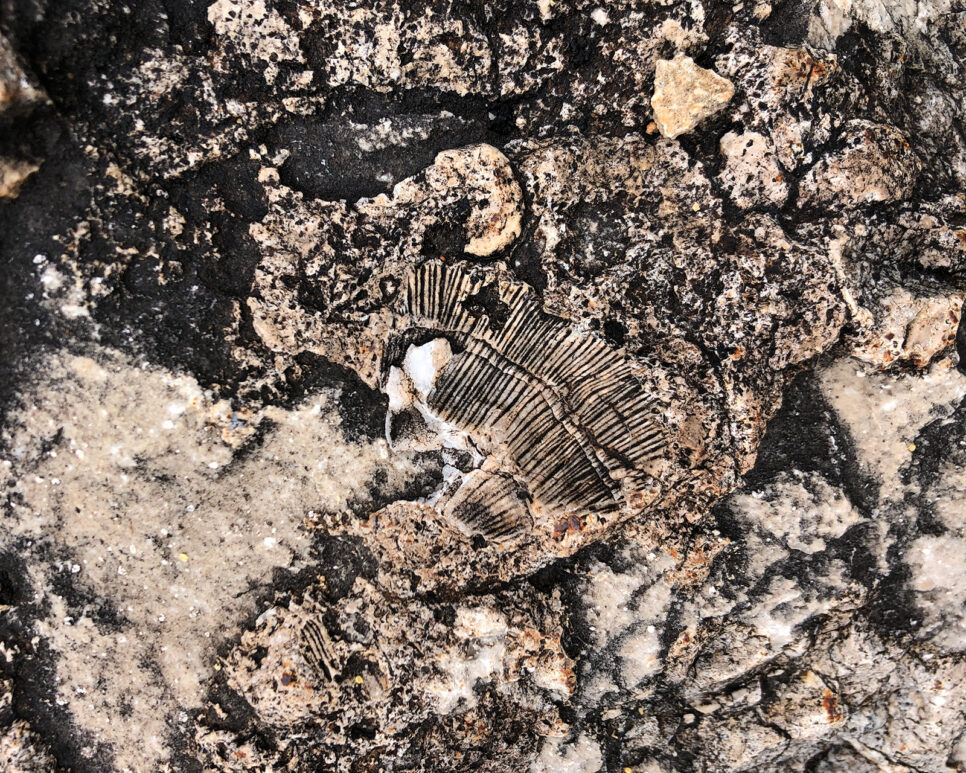 Fossil impression in the stone at the upper Eastern reaches of Tuckup Cañon. Do you know what this is? 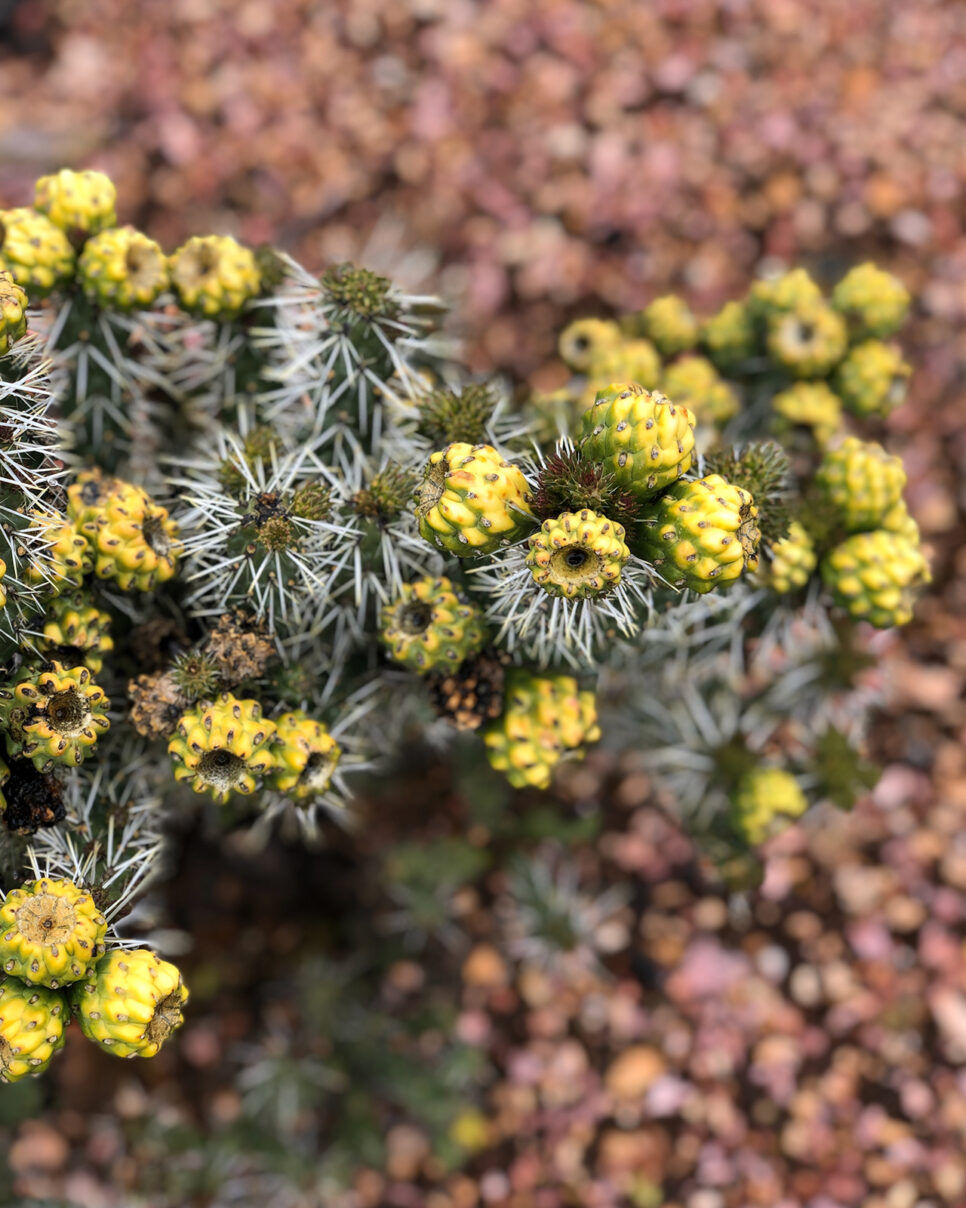 Cholla cactus buds are an edible delicacy for the locals, high in calcium and flavor. 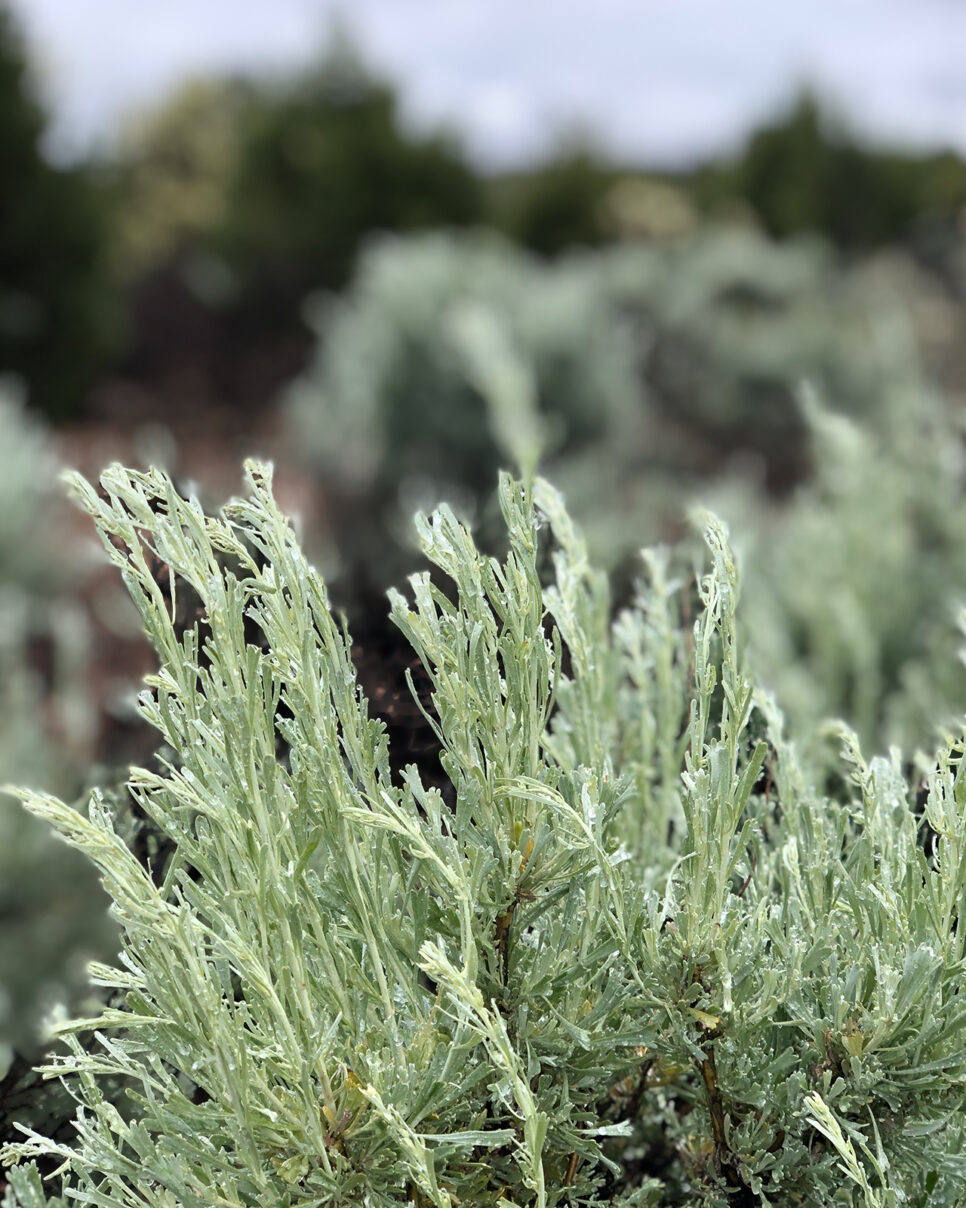 I will never get tired of the smell of wet sage, or these colors.

When I’m hiking I sometimes chew sage and leave it in my gum to soothe toothache, because I know it is antimicrobial. For my tonsils, I boiled sage in my cook pot and gargled that decoction. 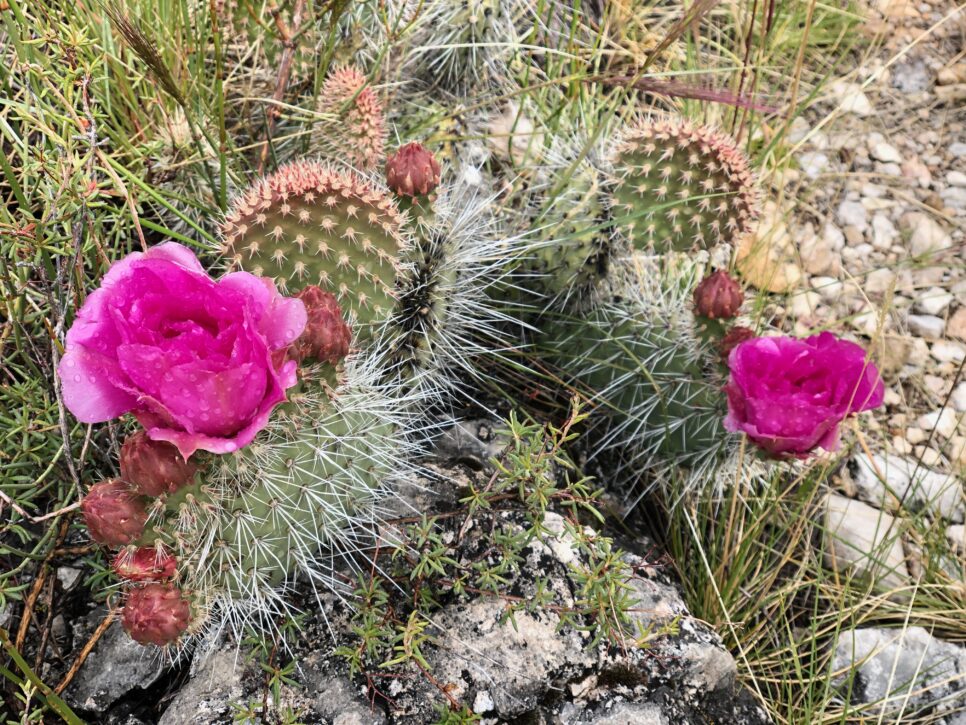 Plains prickly pear (Opuntia polyacantha) has a beautiful flower and delicious fruit. Its blooms are almost always a welcome sight. I suppose some people fall on cacti but I haven’t yet. Knock on wood. It has very shallow roots since not much water has time to penetrate the soil in hot desert climates.

I still have never eaten prickly pear cactus, but would like to. It is a bit intimidating to prepare, seems like! I did eat the fruit (called tuna) on my last Hayduke hike, and that was exquisitely yummy on a late September day in upper Kanab Creek. Still it took some work scraping off the tiny tiny needles first. The fruits are also a wonderful cerise color. 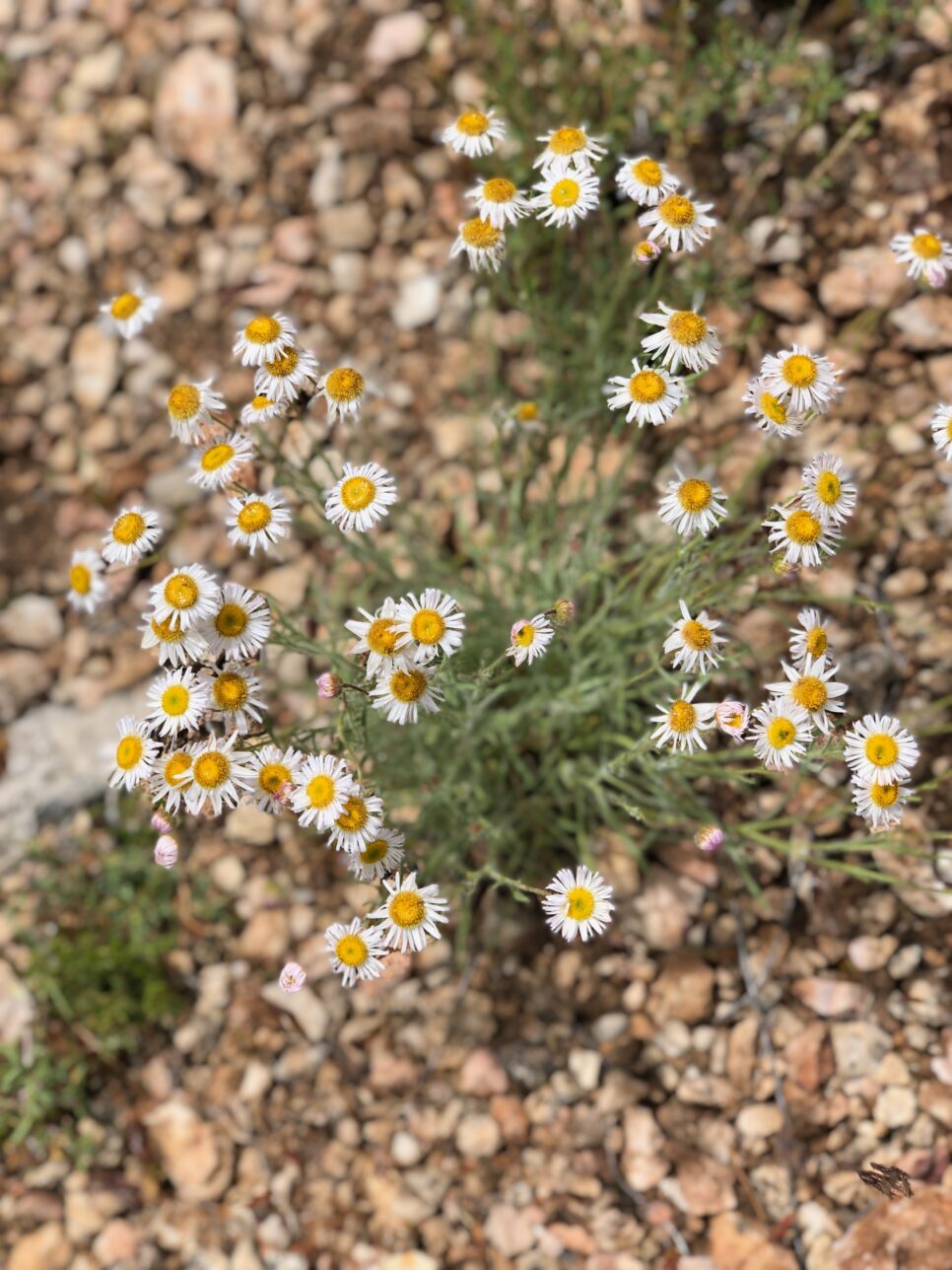 I got to walk through a forest of cliffrose shrubbery, some of which was around 10 feet tall! Heaven. The air smelled so sweet this day, with all its flowers. 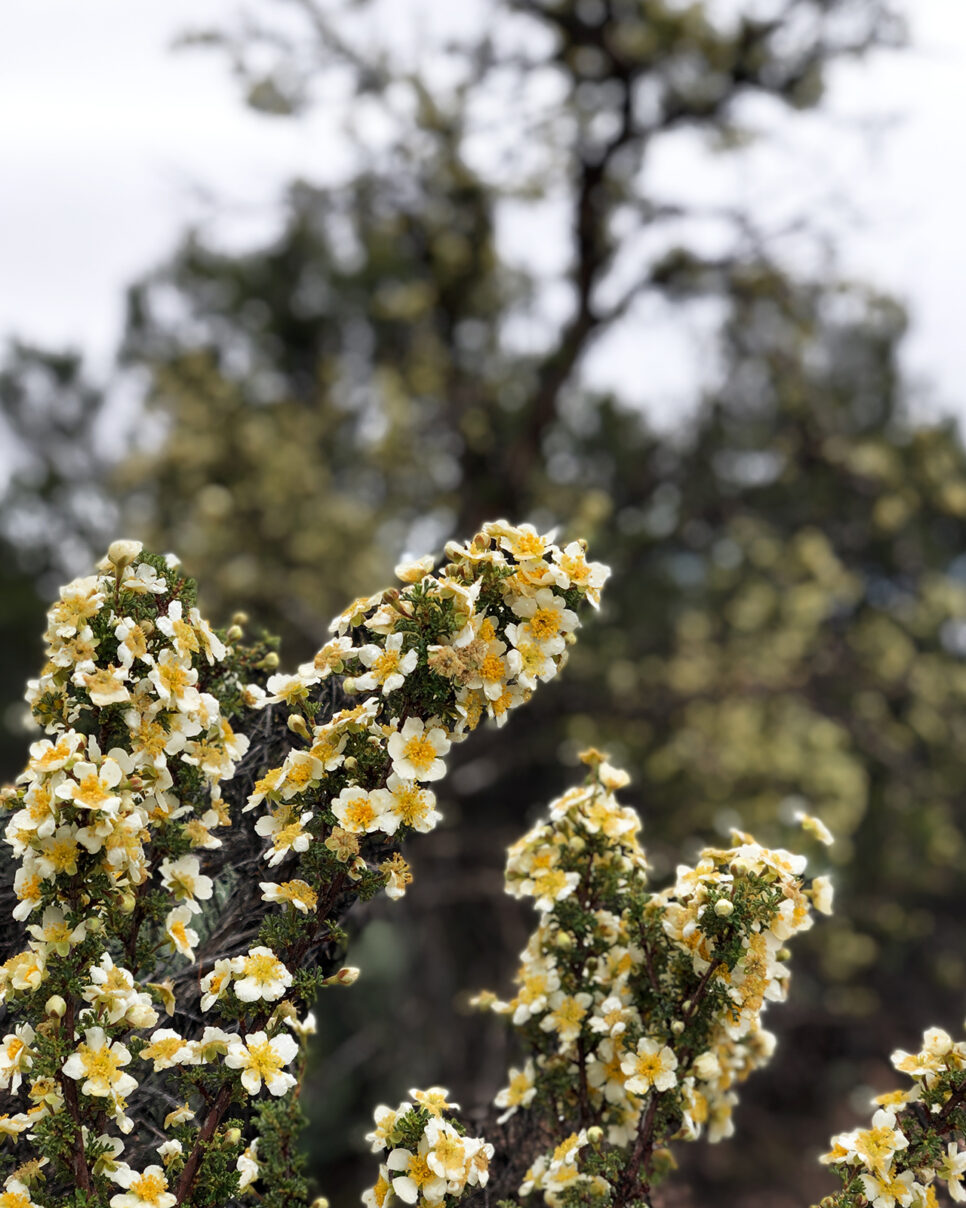 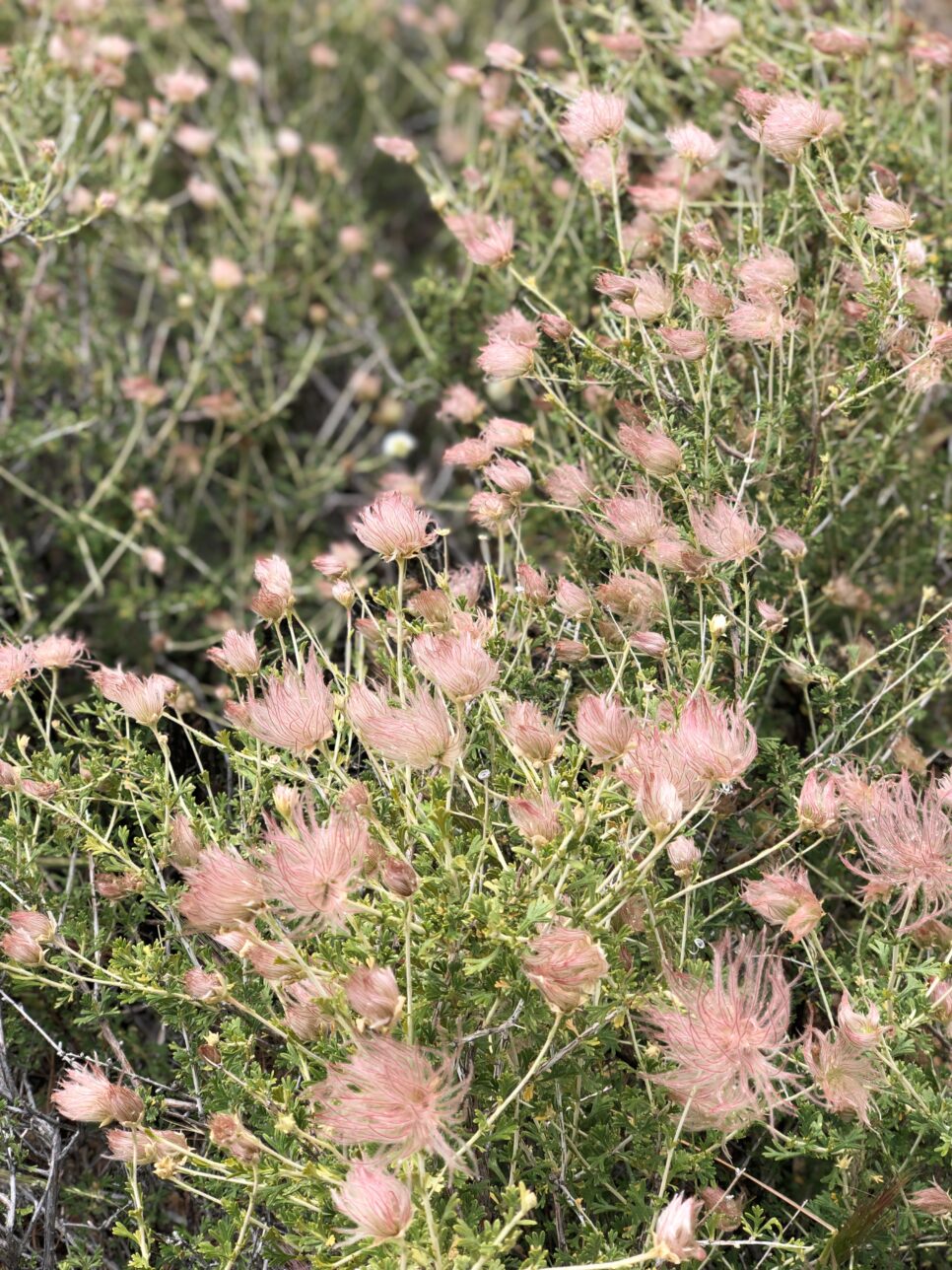 The beautiful Seuss-iful hairy seeds of Cliffrose, a favorite desert flowering shrub. The air smelled so sweet this day.

It produces a profusion of deep rose-pink trumpet-shaped flowers for several months, which are only open from dusk to dawn — or on very cloudy days. This plant has an enormous taproot, which is allows it to grow in unwatered areas once it is established.

Some plants are just very ready for low water conditions, and gosh they are every bit as exquisite as the thirsty ones. 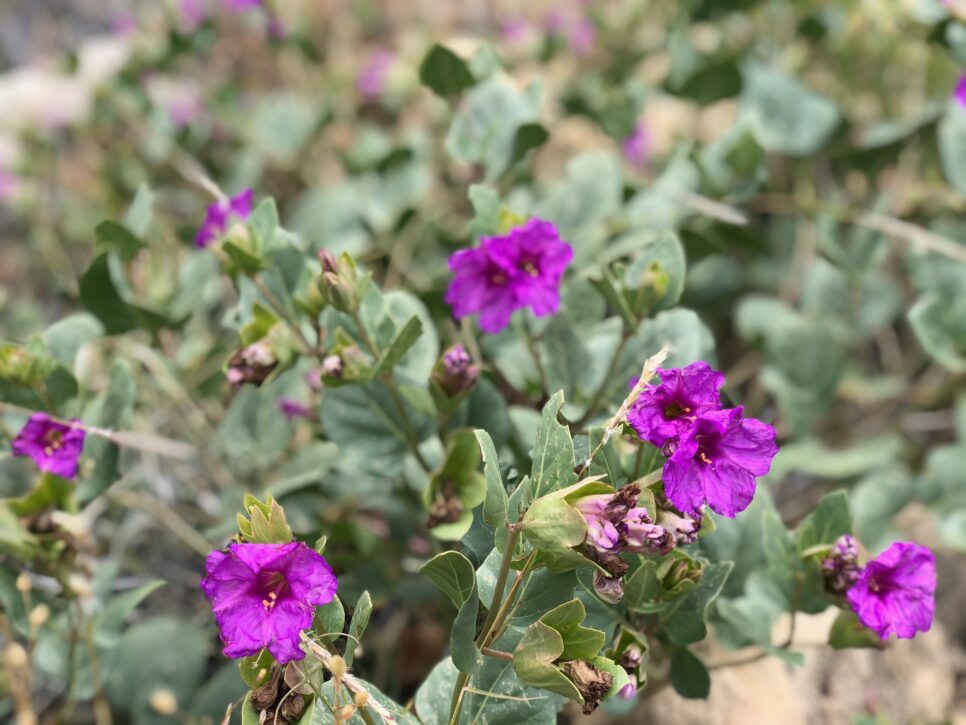 These photos were taken over the course of 28 hours, which was spent moving from Kanab Point down into Tuckup Canyon via the usual Tuckup trail. My attempt at dropping in the northeast corner was thwarted by extreme winds and rain. It was a steep descent on bizarre surface, and something just didn’t feel right about it. I felt certain I would slip. As I mentioned at the start, I try to follow my gut, even if it means traveling another 11 miles out of my way. Those 11 miles were tedious and did stress me somewhat, but I definitely don’t regret the decision. It took me over land that nobody has traveled in a lonnnnnnnng time, and I like that feeling. Granted, my tonsils might have been nervous about that, especially the part where I walked through yet another snowstorm on my way to the trailhead. 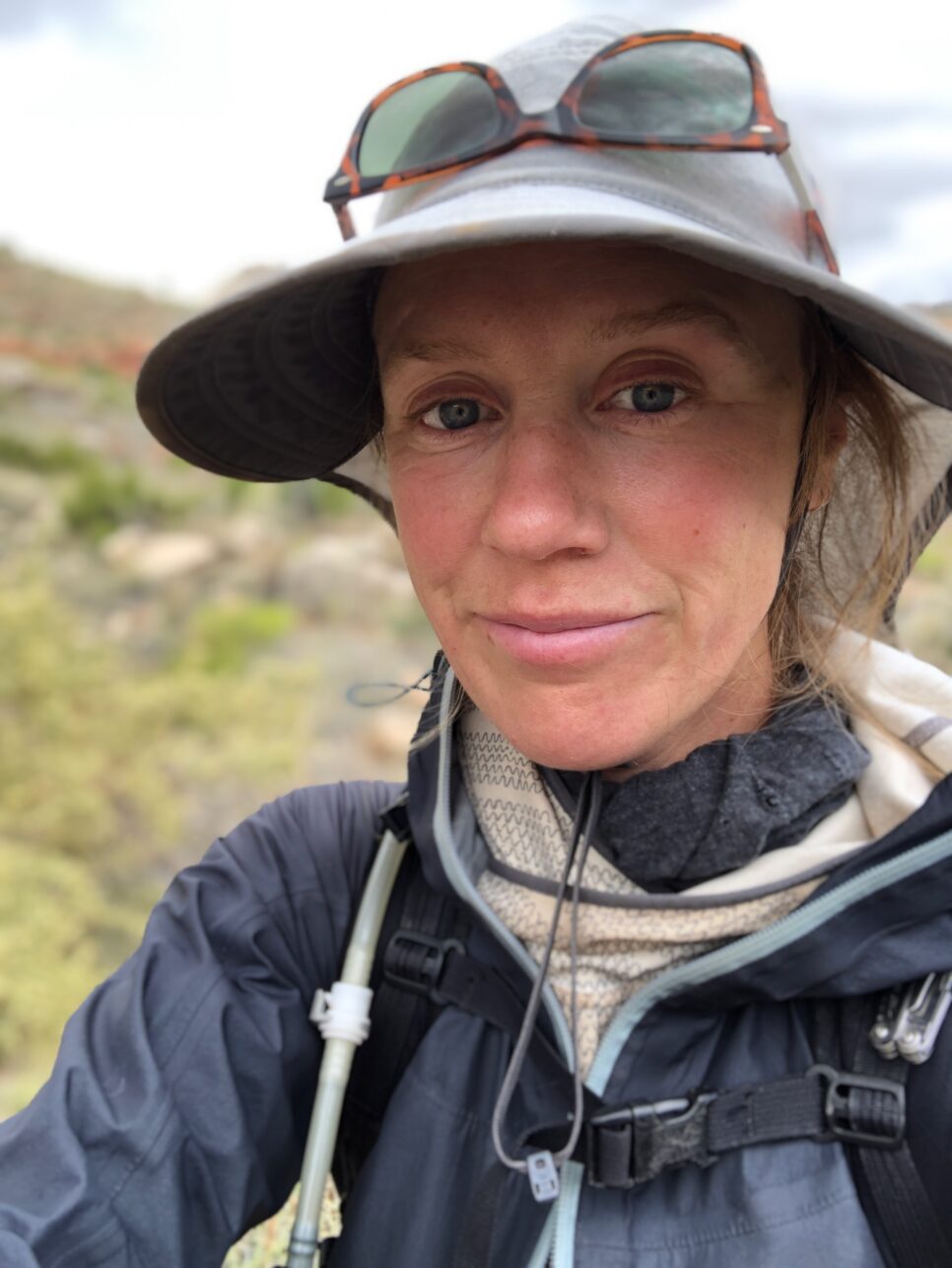 Me, finally heading off the rim and into Tuckup Canyon, after having rounded half its enormous, branching East side.
(advertisement)