I’m getting ready to go on a hike of my own, but I wanted to drop you a note to let you know it’s still snowing in the High Sierra. My 2017 blog post “Dear PCT Class of 2017” with tips about snow travel and whatnot definitely, definitely applies, since we got more snow (* see footnotes) this year than we did overwinter 2016/2017. I spent the winter shoveling, plowing, skiing, and snowshoeing in the Sierra, and I’ll tell you what: nobody who knows anything about avalanches or snow conditions (in brief, they suck) is going back there behind the Crest right now. I hope you read my 2017 letter and do all the other research and preparation you can, and don’t rush a thing. There are a lot of us who are very concerned for your safety. Remember that Leave No Trace (LNT) ethic isn’t just about not littering, it also means you travel prepared and don’t inconvenience other folks with your lack of preparation.

Though it makes me unpopular, I’ll go ahead and say it: This is a shitty year for a PCT thru-hike. Never mind wild fires, I could be just talking about snow. You’re not going to get your “continuous miles” without some serious, otherworldly good luck, hard work, and preparation, and then more good luck.

It’s a great year for a PCT section hike or flip-flop, though! I definitely recommend waiting until late July or August (or later) to hit the Sierra. But considering the entire Crest from Mexico to Canada was hit hard with snow, think again: where will you skip up to?

Since I’ve got your attention, please check out the new LNT social media guidance and consider the impact hashtag-whoring has on the wilderness. Why hashtag at all? Think about it: there isn’t anything worthwhile to be gained from geo-tagging and hashtagging fragile wilderness. Fake friends? Friends don’t let friends whore the wilderness to gain fake friends…

I’ll be carrying a Garmin InReach (mini) satellite tracking device for my next thru-hike because I’m pushing my own limits a bit. I used to be opposed to carrying one but now I’m realizing I can be less of a burden on everyone if I’m easily located in an emergency. The first time I carried one last September (thanks Jamal at acrossutah.com for loaning it to me), I ended up using it to contact Search and Rescue (SAR) for a gentleman who stranded himself with High Altitude Cerebral Edema (HACE) on top of Mount Whitney. He was unprepared (very little food and no warm clothing) and refused my earlier advice to turn around before the sun went down. When he reached the summit and was weak and disoriented, I kept him up top overnight in the summit shelter with me. 9-1-1 would not send a helicopter because flying in the dark up to 14,500 feet would be too dangerous. I had to keep him warm and hydrated overnight and well into the morning. That involved wrapping all 6’5″ 250# of him in my cuben tent, rain jacket, and my friend’s emergency bivy, spooning him, him getting frisky a few times (ew!), running out of food and water myself, then in the morning, him wetting and shitting himself (and my handmade down quilt). After I spent four hours walking him two miles, catching his falls countless times despite his being soaked in urine and smelling of feces, Kings Canyon SAR finally did a short haul rescue by helicopter from near Trail Pass. Never heard from him again. Hope he’s alright. 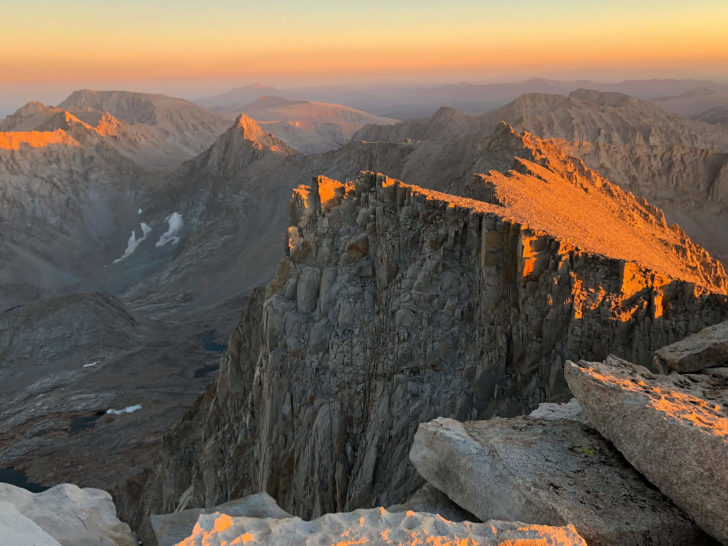 When I wasn’t on the phone with sheriffs or messaging SAR, I found a few moments to take photos of the gorgeous sunset over Keeler. Unfortunately, it was not the peaceful summit I was hoping for.

So that’s a fun tale of poor Leave No Trace ethic and how badly it can affect other people. The punchline of this story was he wasn’t the only one needing assistance in the shelter that night. A grumpy German showed up after dark and needed my friend to help keep him warm. The German actually stuck his feet into my friend’s sleeping bag in the middle of the night! “Do you mind?” Two unprepared hikers; two hikers imposed-upon.

To the friend I’ve mentioned, Danny, a 2018 JMT hiker who I had just met that morning near Rock Creek: I AM SO SORRY I TEMPTED YOU TO CELEBRATE YOUR JMT FINISH IN THE SUMMIT HUT. We were going to drink tea and look at stars. Instead you and I were up all night making hot water bottles for freezing strangers. If I had just kept my mouth shut, you would have bivyed near Trail Crest, and maybe been amongst the dozens of hikers who simply walked by the next morning as I struggled down with the sick gentleman. But now that I know you, I suspect you probably would have even given up a summit to have helped. Total hero. Big respect.

Moral of the story? Keep in mind that even if you are prepared and “expert” when you enter the High Sierra in a very high snow year, you probably will encounter other people are are NOT prepared. How will you deal with this, will you be able to initiate or perform a rescue? Will you be able to put aside your mileage goals and personal comfort to help? If you do not, how will you confront your conscience? Many people told me I should have just left the gentleman to fend for himself on the mountain, including a local sheriff deputy. I struggled with that idea, because as a former RN, it was 100% clear to me the gentleman WOULD have died left to his own devices that night.

These days when I go into the woods, I’m more and more afraid of finding people out there who need more help than I can give. I go out there to get away from people, and especially stupid people! But social media is bringing the stupid people — social media zombies with zero outdoor ethic — out there. In droves. It’s frightening!

Please be careful, friends, and stop inviting the zombies.

* My friend Kyle has steered me back to reality. “More snow” is totally an exaggeration, based on the fact I wintered at 6500′ near Bishop and spent way too much time shoveling. Snow water equivalent and snow pack is thus far about 10% below the 16/17 levels. Still >150% above average, though, and high enough for me to exaggerate in order to try to save lives.

Addendum April 2 2019: Charts like the ones I used in 2017 are no longer available. California snow data can now be found via FERIX. I was able to use FERIX to verify rumors that the South Sierra (think Kennedy Meadows) was reporting snow pack near 200% of average. Watch the Pascoes (station ID “PSC”, 12 miles west of Kennedy Meadows) and Casa Viejo (station ID “CSV,” currently 2″ short of record SWE and only 7 miles west of PCT mile 721) snow stations and keep in touch with folks at Kennedy Meadows to see if you’ll even be able to get back into the Sierra without snow gear in May/June.