This summer while a friend was driving my van through Yosemite to fetch me on the West side, my blower fan seized. He said he almost had a heart attack as my dash smoked and threatened to catch fire. (A reminder why all drivers should carry fire extinguishers.)

But I knew the truth. The time has finally come for the dreaded Vanagon dash removal. The only way to replace the heater fan is to remove the entire dash, which means disconnecting all the wiring, removing the steering wheel, and worse, somehow opening the stubborn clam of a heater box. No big deal. Once my friend returned home to the Midwest I took on the project. It was actually a good thing because it meant I could finally also tackle the windshield leak. Might as well put in a new front heater core, too. 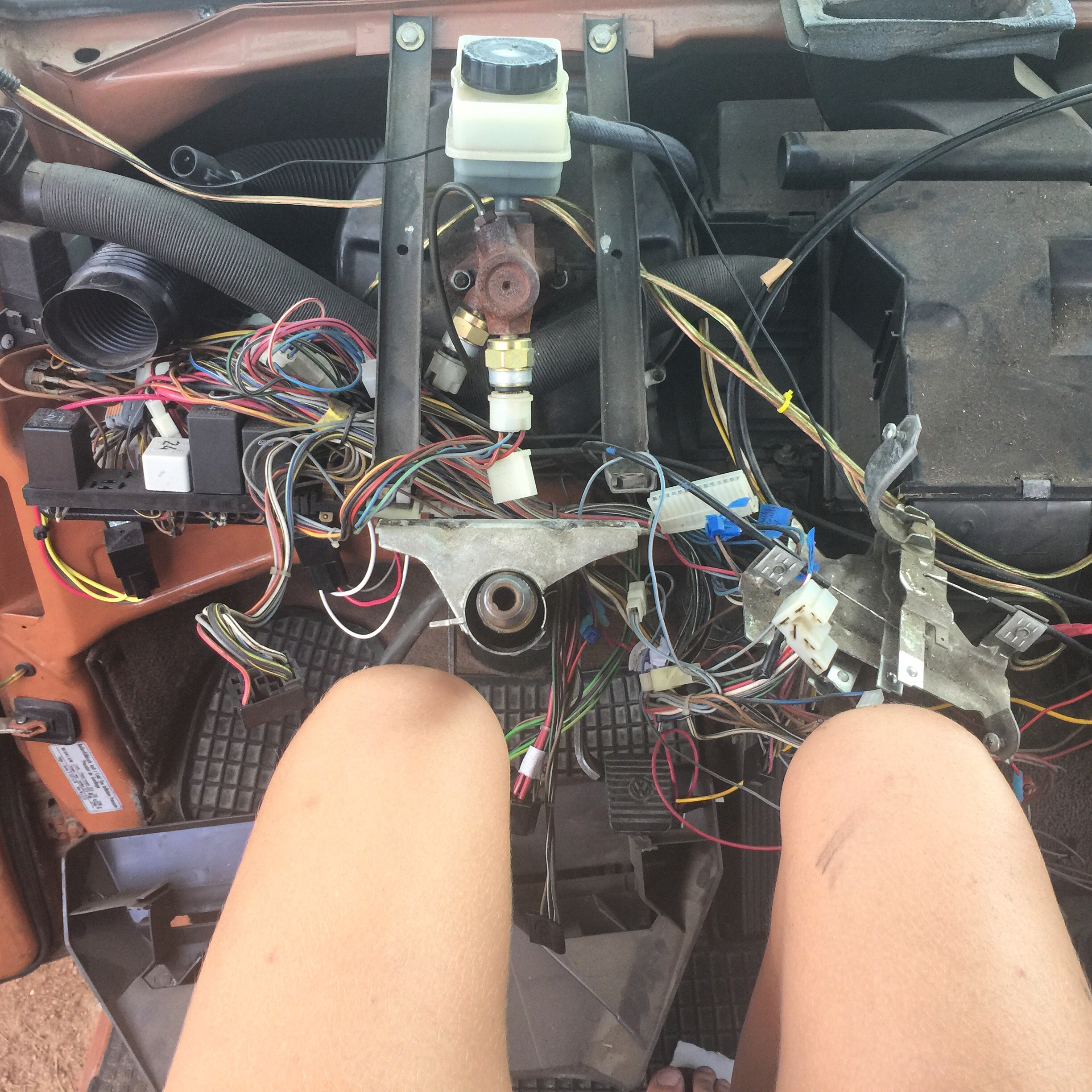 Following the instructions to remove the dash, I had everything easily apart except a couple bolts holding on the heater box.

I used these instructions to remove the Vanagon dash. Pretty simple until I found two rust-seized bolts on the firewall. I left those in and chose to break the already-cracked heater box tabs and deal with them once the box was out. Tip: label all connections. I used painters tape and a Sharpie. One wire wasn’t labeled and let me tell you, what with some of the wiring mods I’ve done in the dash (like my super sweet analog clock to tachometer upgrade), it took a day to figure out what it went to. It went to the old, defunct, Euro-style 12v charger.

It’s now so clean under the dash. That’s 12ga speaker wire just in case I ever do something with sound. 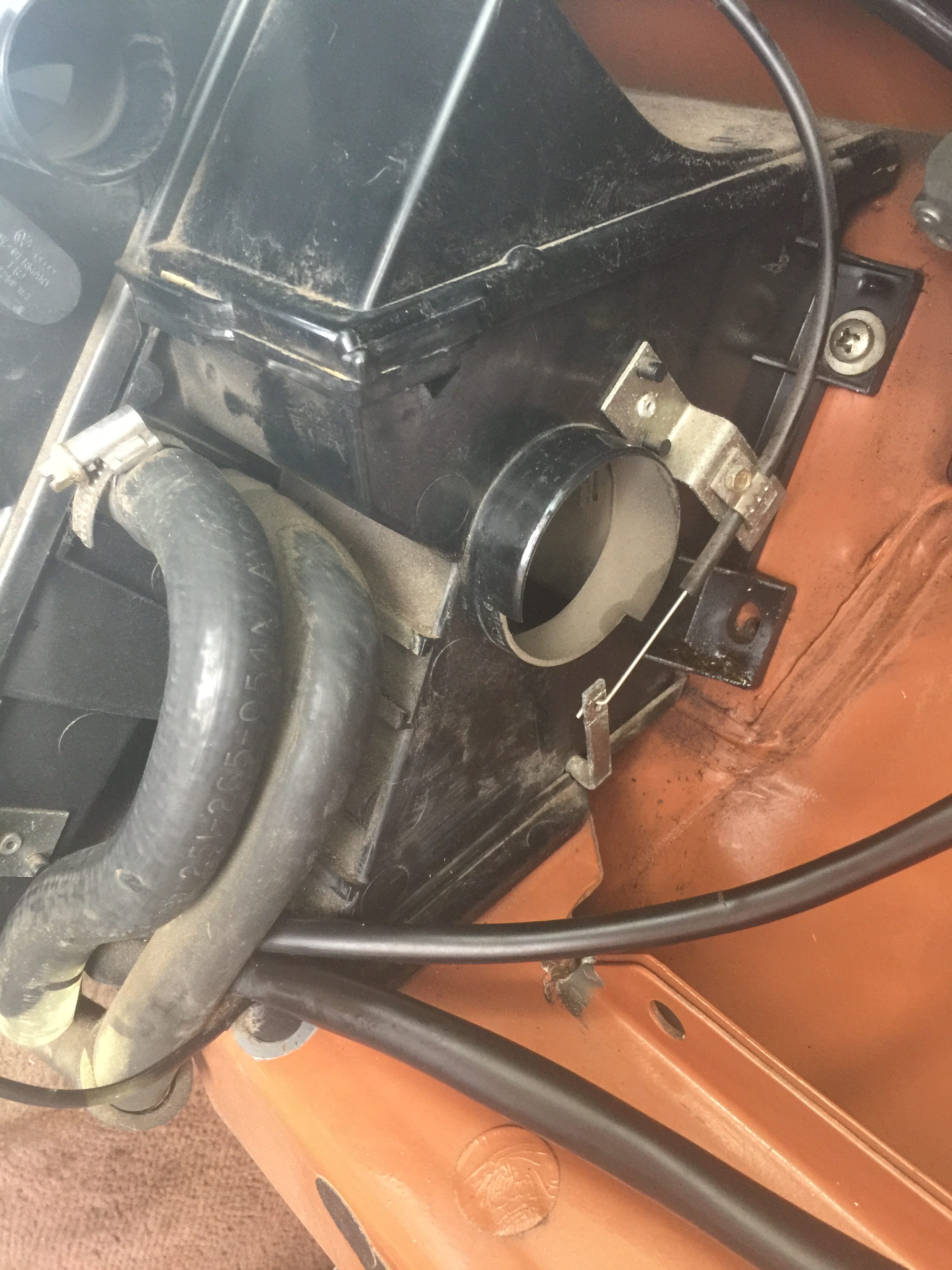 As I found it.
A couple tabs were snapped off and it had several holes. Given it’s in the dash how does this damage happen?

They are not kidding when they say these are tough to crack open. Have supreme patience. Mine came with clips but was also cemented.

The two halves of the heater box fit together a certain way, and the contact has a tongue and groove fit. Keep in mind if you are prying them apart that you might be prying in the wrong direction. The factory (solvent) glue is extremely difficult to get past. 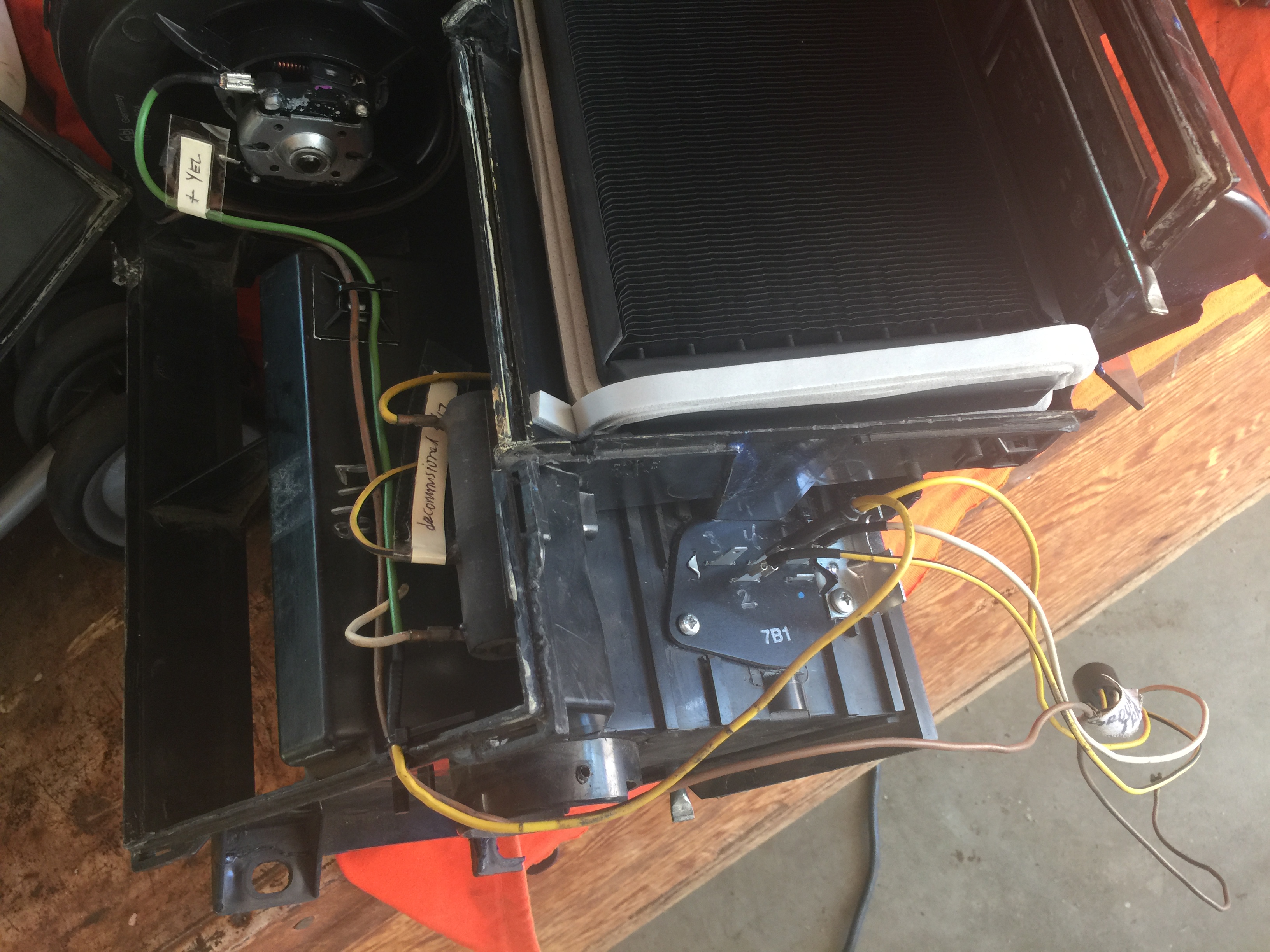 I ran out of yellow wire and did a half-ass splice, but an electrician looking over my shoulder gave me the go.

A $15 upgrade to the Vanagon heater switch resistor. The (hot) resistor coils are now inside the heater box where they always get air (the Vanagon does not allow for stopping intake to the box). The plastic of my heater box was only slightly melted from the old resistor. I could have further upgraded to four fan speeds, but from what I read in the forums there wasn’t much of a difference between the 3rd and 4th speed.

The green wire here should be yellow but I try to work with what I have. I found several ways to wire this posted on forums, one distinctly wrong. My bench test of the new fan found all four settings to work (off-low-med-high) and the new fan to be whisper quiet. I’ve been living entirely without the heater for four winters so this is very exciting! 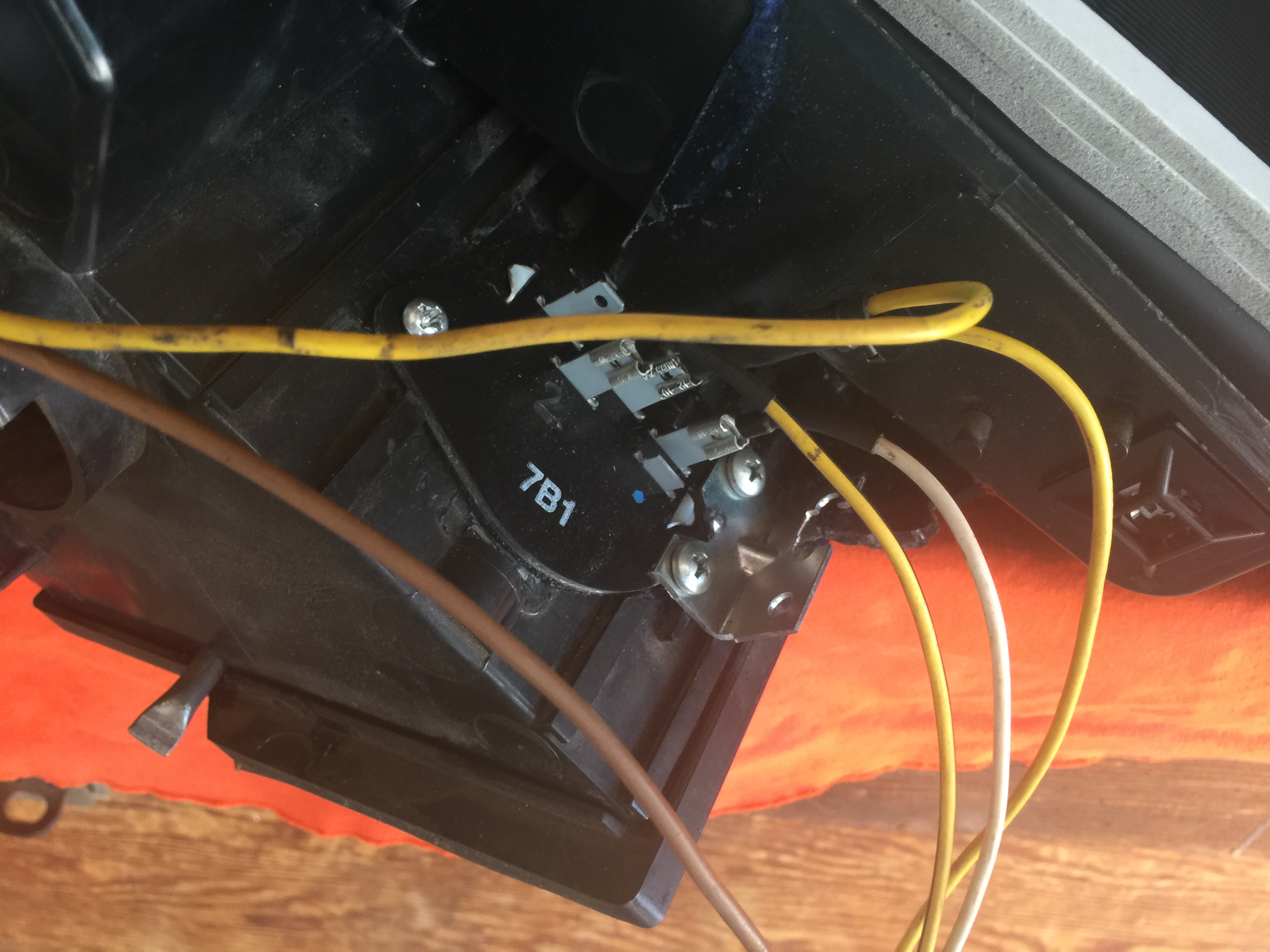 The factory resistor in these vans was iffy and so I put in this mod, a Jeep part. It works spectacularly.

I had to grind down heater box (and obviously make a hole) for the new resistor to fit. The sloppy metal clamp you see was an attempt at maybe making a new bracket to attach the box back to the firewall. If I tried harder and cares, it might have worked. 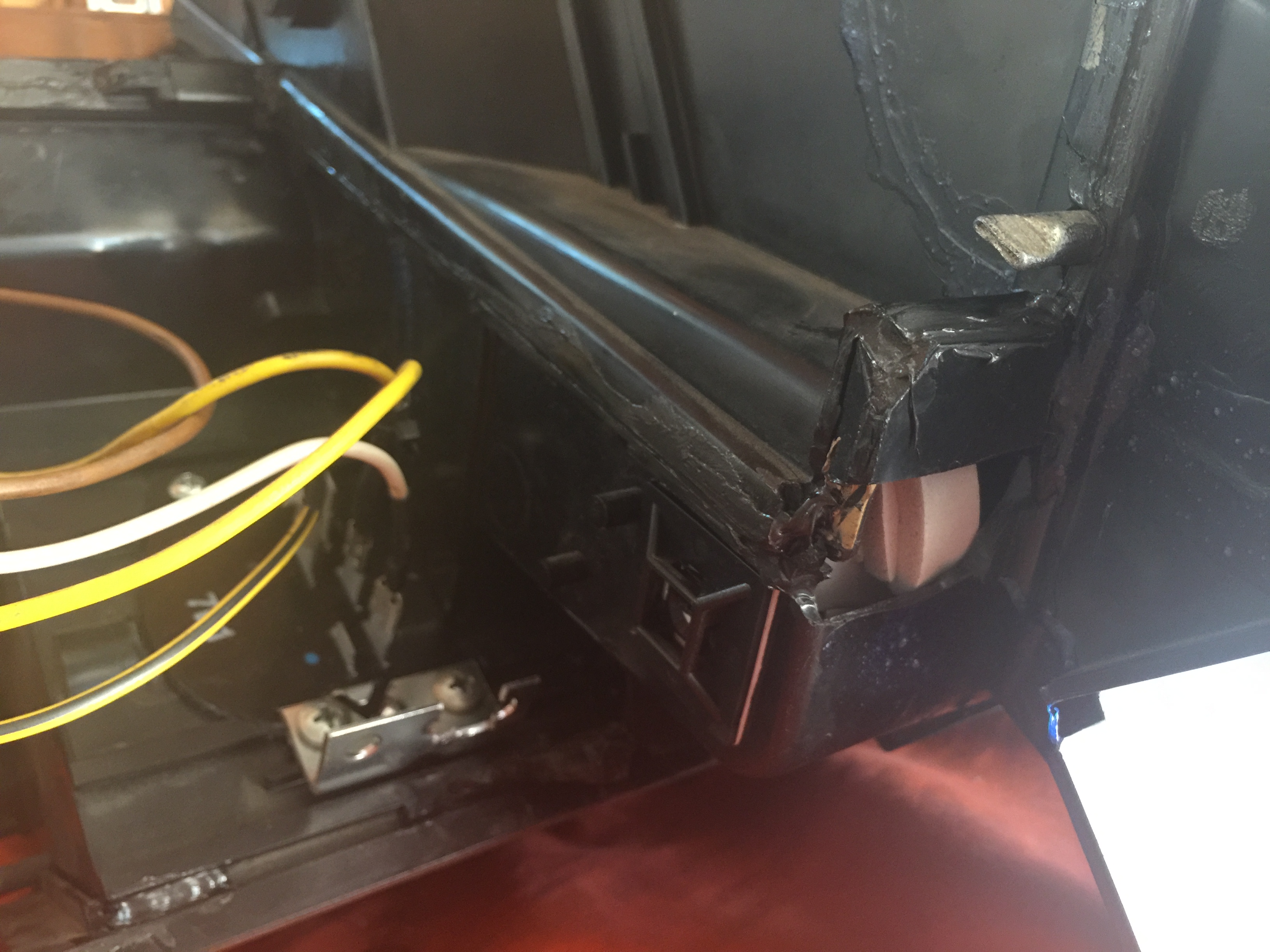 These heater boxes are near impossible to replace so you’ve got to work with what you have. I found that blue PVC cement worked excellently on small cracks and puzzle piece repair. The rest? Duct tape. I spent half a day figuring out where the chips fit and gluing them back together. It was delightful how the PVC cement made parts of this box like new. As far as foam for the flaps, I used 1/8″ closed cell foam from an ultralight backpacking mat I had laying around. Well, something like that except I bought mine off the roll from an upholstery company I had laying around. I’m not sure, maybe the 1/4″ thickness would have been better. I use high heat spray adhesive to attach it to all the heater box flaps.

GoWesty graciously ships some foam weatherizing tape with their very dear heater core but I supplemented that with a little more adhesive weatherization tape to make sure everything was air tight. 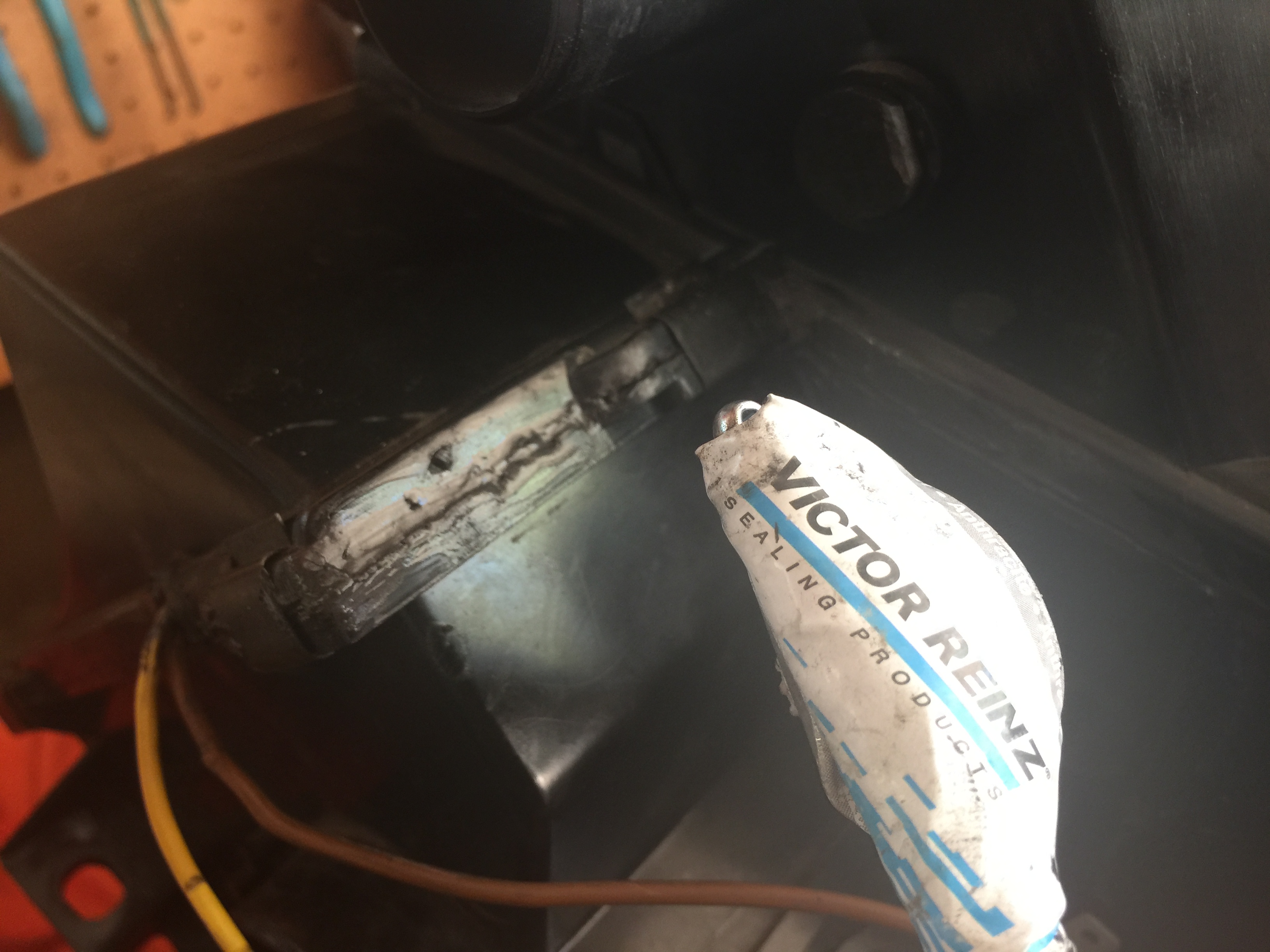 Who knew head gasket sealant would come in so handy?

I also figured if this sealant was good enough for my engine heads, it’ll do for the heater box. While prying it apart I had roughened the contact edges, so this filled everything in and next time it needs to be opened it will be much easier. One cool thing about the resistor upgrade (being installed outside the box) is there’s one less reason to open the box!

Heater box repaired, resealed, and back in the dash

For years, every time it rains, my front floors get wet. Years ago I bought a new windshield gasket and for years I’ve thought about finally replacing it. With the dash out it seemed the time was finally ripe. I nervously Googled and re-Googled how to remove the windshield and put it back in. I would call a glass shop if need be. (Lord knows the rear window was impossible to re-install alone. I’m still bummed the glass guy forced my hand to let him cut the fins off the factory gasket so it would fit the frame. Doesn’t seem right.)

But after cutting out the old gasket from the inside, the windshield just pushed out. Time for the big reveal. How much rust? How much damage? 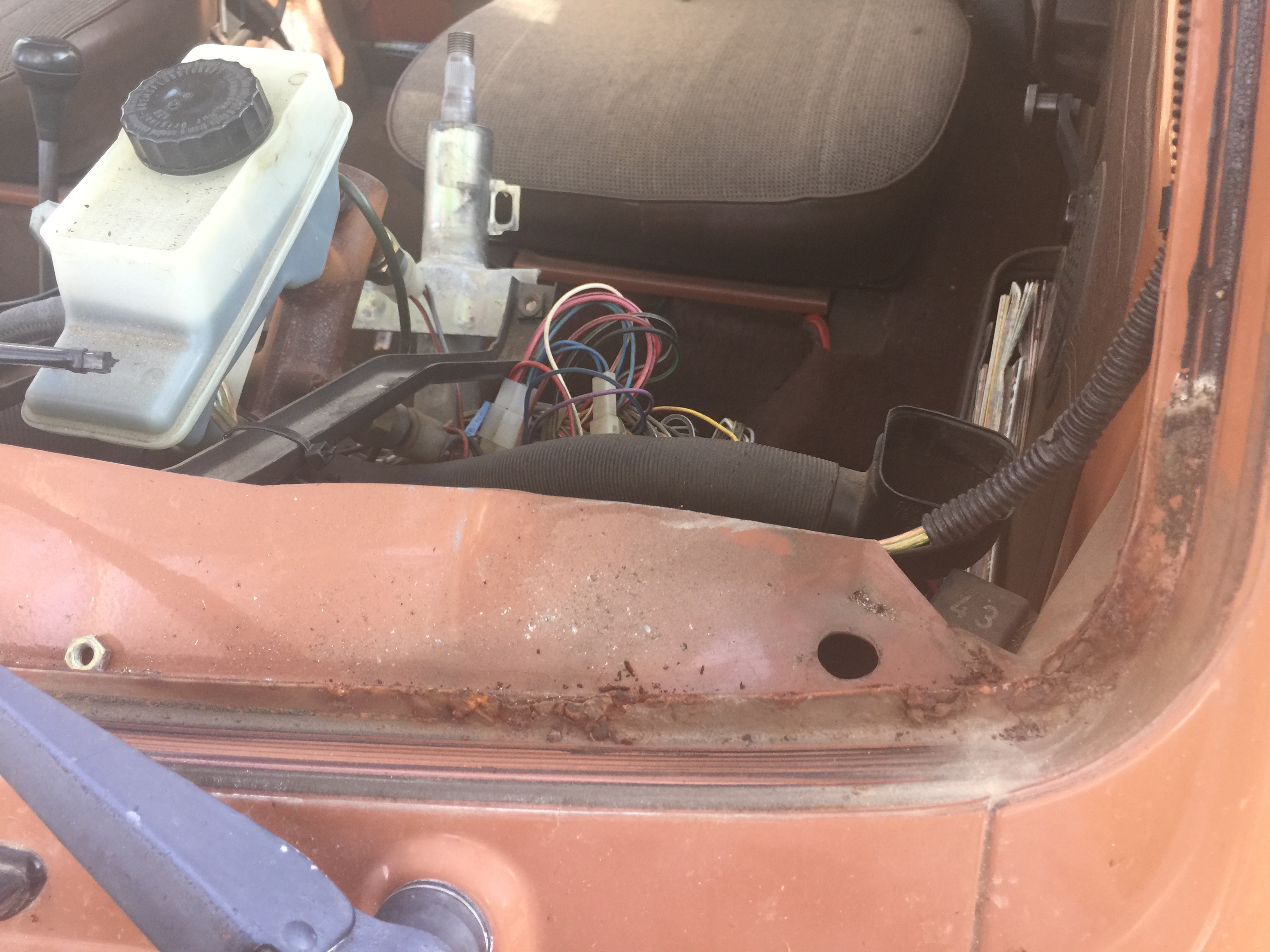 My van has been leaking under the dash since I bought it.
Time to address that. 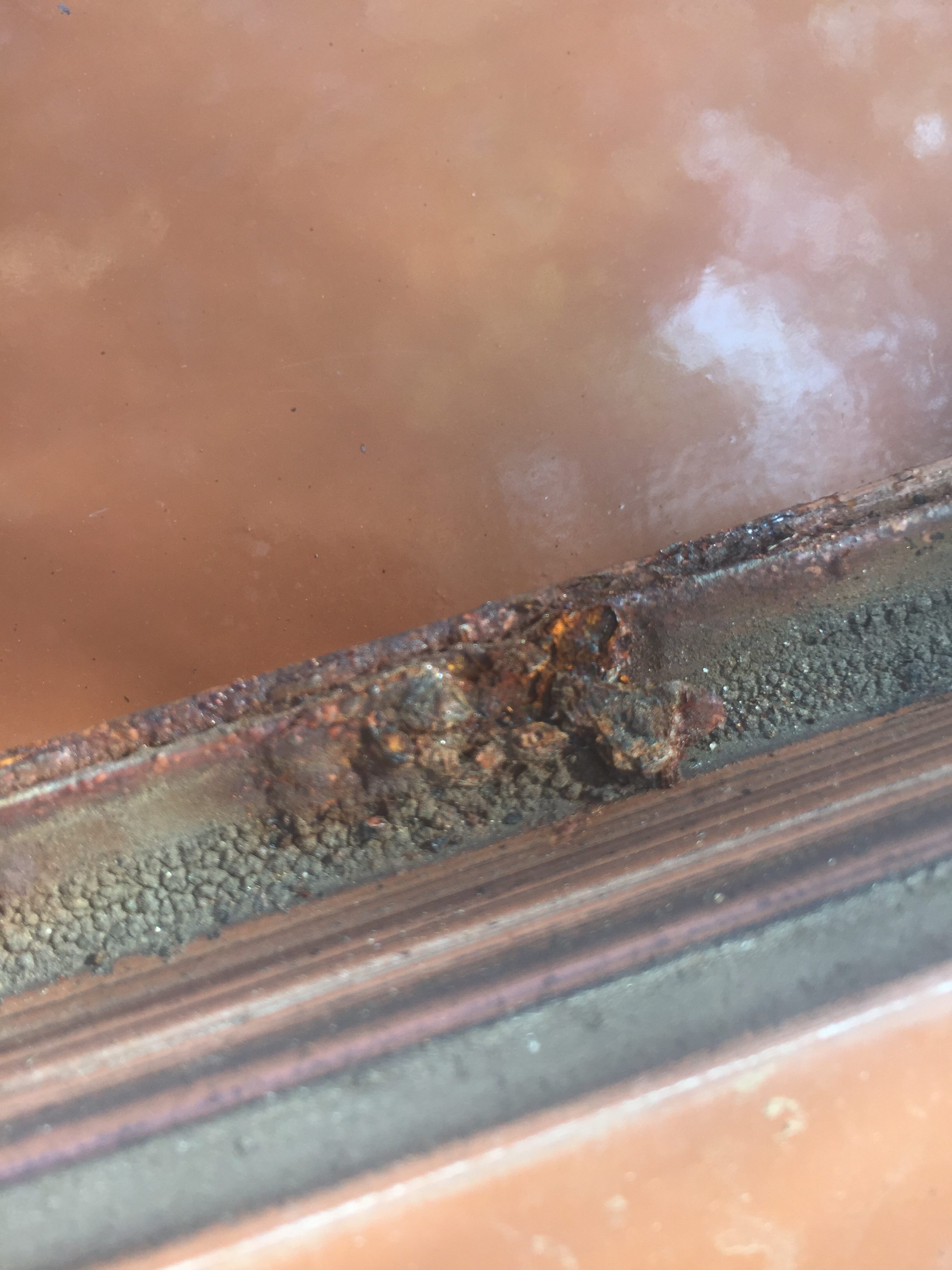 It looked worse than it was in some places, in a couple places it had rusted through and it was no question why my van leaked. 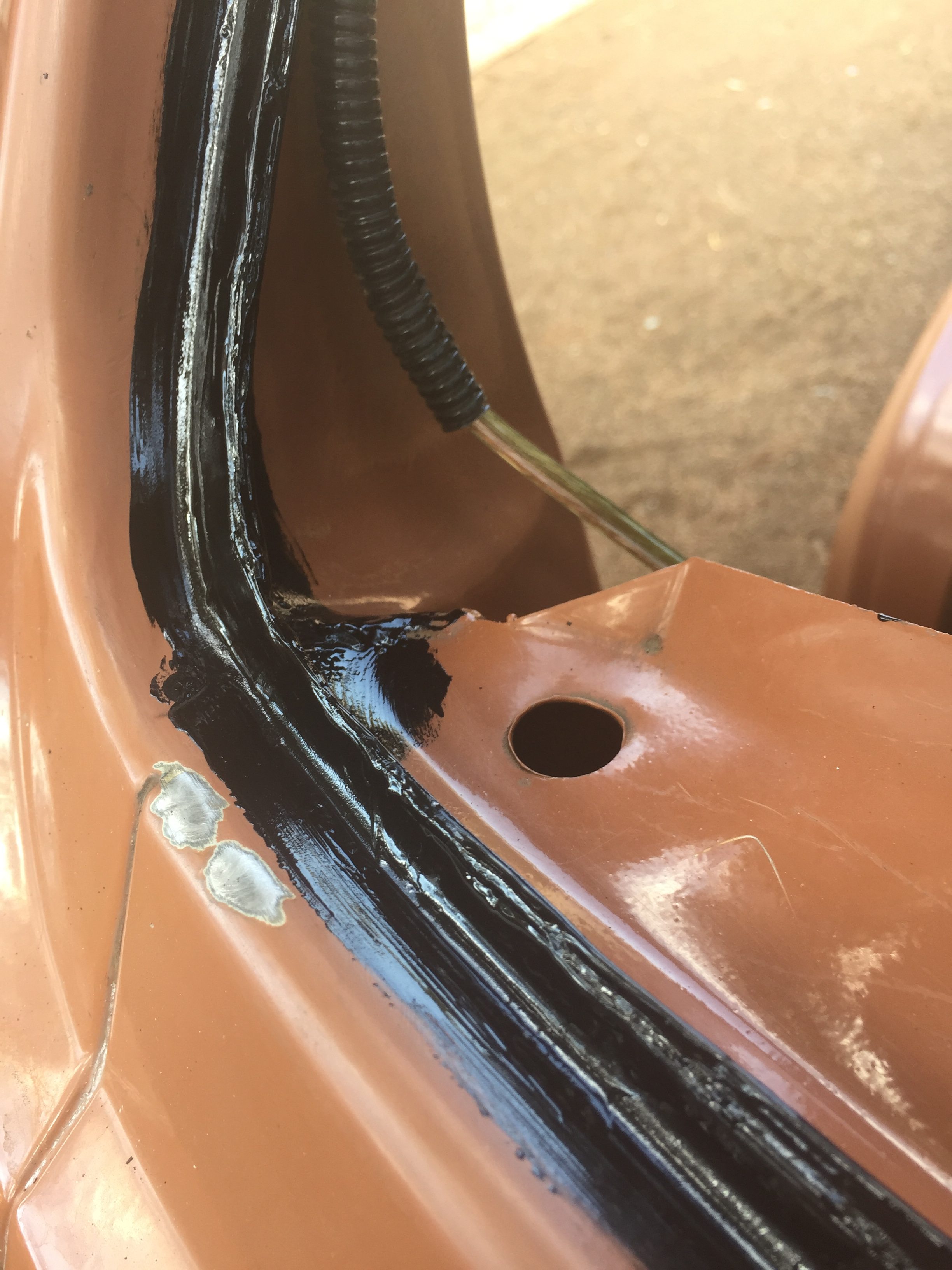 I used POR15 paste on the pinch weld after thoroughly smoothing and cleaning it up. Not sure I was happy with the result. The POR bubbled. So I sanded again and applied another coat. It bubbled again, but not as bad. Maybe it’s those 100° California days. I did try to only paint once the day cooled, so maybe the bubbles were something else. The bare metal spots you see is going to show so it was bondo’d, primed, and painted with matching “Assuan brown” touch up paint. 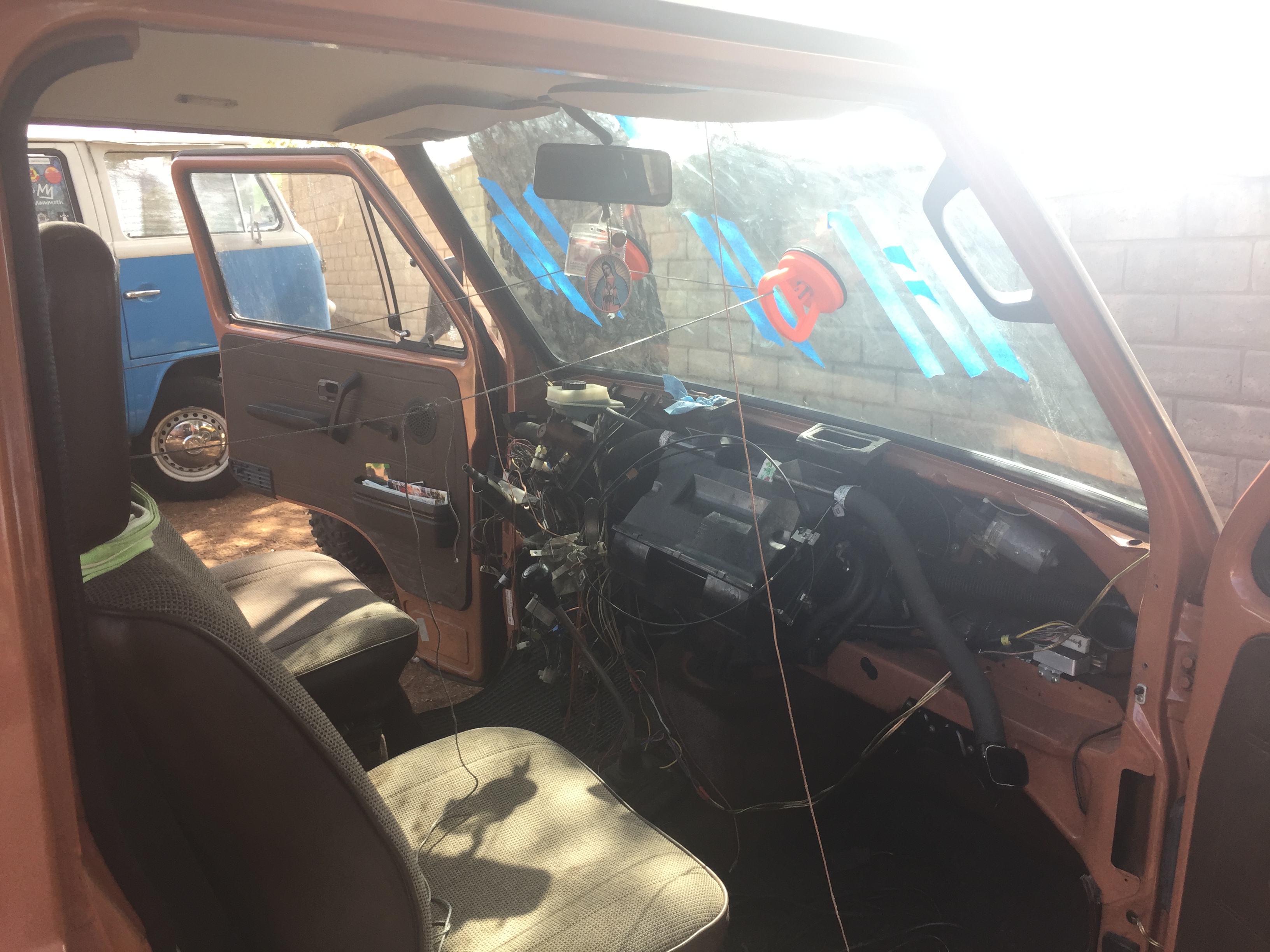 The windshield tied to the seats just in case it pops out while I don’t have hands on it! Ha! I removed and re-installed the glass alone, no problem.

What makes the windshield so much easier to install than the rear glass is the angle of the frame. You can lay the windshield glass in, seat the seal on the pinch weld at the base, then use the rope method as described perfectly here at Gowesty. My only “special tool” was some greased Dyneema cord (rope) I had laying around. My heart was pounding and then the seal flipped over that last inch of lip and the glass was in. Not nearly as big a deal as I feared.

I am so looking forward to warm and dry winters in the van. If I can save the money I’d like to replace the carpet pads and carpet up front. Who knows what all the moisture has done there… Oh! The joys of owning a Westy never end! 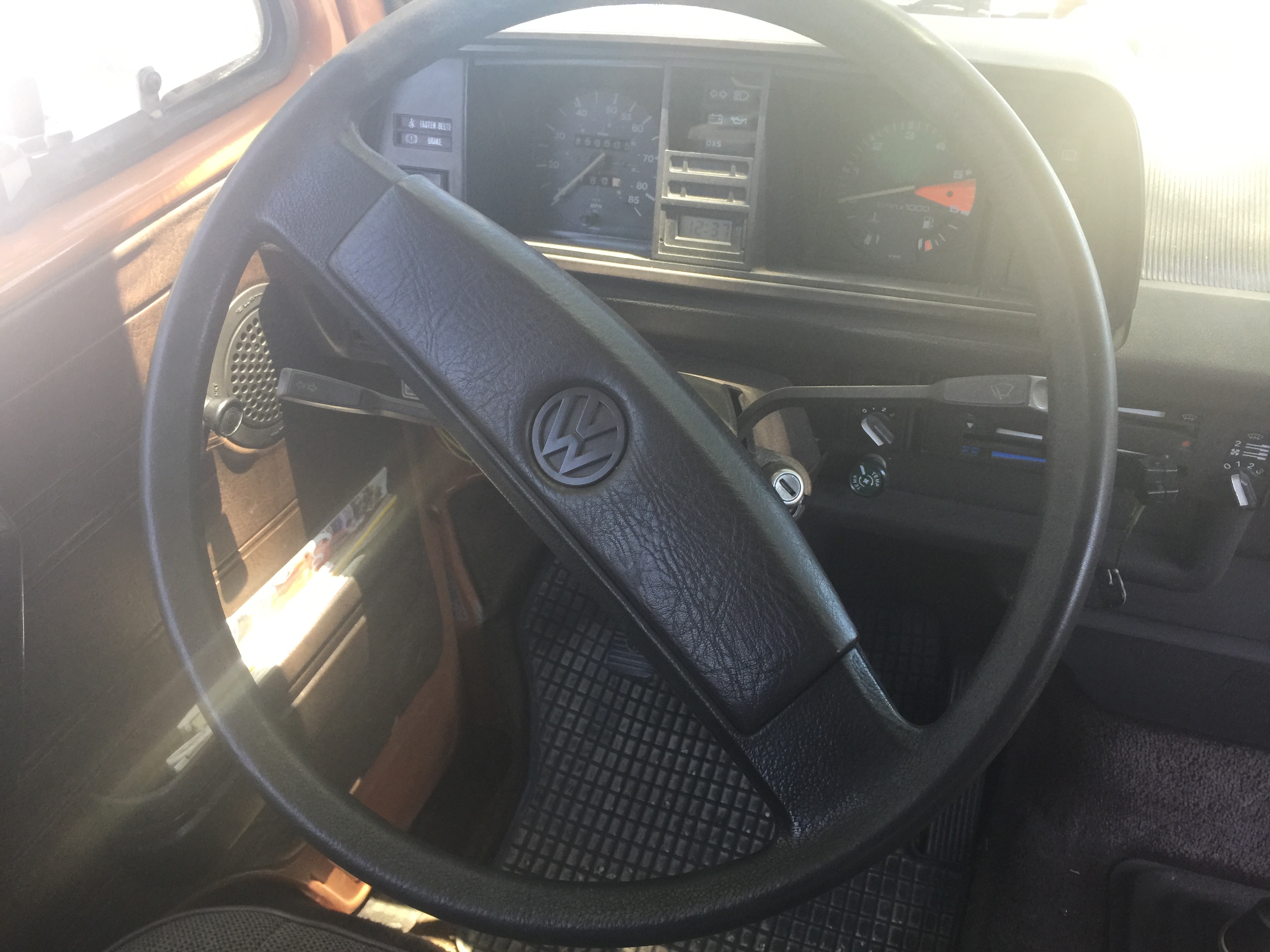 Showing off my van’s operational (and accurate) tachometer, taken from a 1987 Vanagon.

This tachometer update happened in the Spring. It was a bit of a complex wiring project. I figured out that 1/8″ copper wiring tape came in very handy for repairing Vanagon dash foils, and that saved me a lot of time and money. I love sleeping in silence. I really did not like the TICK TICK TICK TICK of that silly clock all night. Now I have a digital clock!

Cool, me too! It’s how Little Package Cycling Caps came to be. I’m not sewing caps right now, but I bet you could make your new favorite cap — yourself!

Keep in mind the holidays are coming up. Homemade cycling caps make fantastic gifts for cyclists!