Hello from Lone Pine! I haven’t posted my last hike on here yet but it was one of my toughest yet. I had to bail about half-way through with a busted foot and with concerns about snow off-trail at elevation. More on that soon.

Yay, snow! That’s what I’d love to talk with all of you about. Andrew Skurka just suggested 2017 is just an “average big snow year”.

Oh? I’m looking at it (the High Sierra) out my window right now, and it scares the doodoo out of me.

2017 snow pack is the biggest whomper we have seen in 20 years. Forget about 2005 and 2011, we are entering new territory with just about as much (well, more) snow but more heat from our warming planet. Snow is not only STILL falling in the Sierra, but has begun to melt, with significantly high and early – dangerous – runoff. Consider this: the Los Angeles Department of Water and Power (LADWP) and the Mayor of Los Angeles have already declared a state of emergency trying to figure out what they are going to do with so much water. Dude, the LADWP — their business is water, and they can’t handle it! Flows coming off the Eastern Sierra have already been so high as to cancel annual riverside events and concern the locals about (unusual) flooding of their properties.

Your business is hiking

When you envision hiking the PCT, I’m sure you sort of imagine getting away from it all and undergoing a cleansing of your soul and a transformation of your heart. Maybe at the worst of times you might scream into a canyon and throw your boot over a cliff. There might be times when you are thirsty, times when blisters sting, and other times where you’re tired of eating desiccated food matter. In many years, a PCT thru-hike could be like this. In 2017, hiking business will be complicated with snow business… which is actually water business. Water is going to turn it sideways this year.

Because of high flows, I want to caution you about some risks you probably haven’t heard much about yet:

Forget yelling in canyons and throwing boots. It’s not just that you’re going to be post-holing step after step and twisting your ankles left and right on suncups at 1mph* through snow on hot days. *Most hikers travel 3-4mph. It’s that you’re going to be dealing with epic amounts of water, sometimes rolling through areas that have been stripped of trees, sometimes in areas high above tree line, and sometimes amidst trees under several feet of water while trying to find safe crossings. Think a little more “Labyrinth” and a lot less “Yellow Brick Road.” A little less “Wild” and a lot more “Into the Wild.”

So Andrew Skurka published that opinion piece about the 2017 “average big winter.” I find it aggravating, especially since he’s writing from Colorado. I’ve lived in Lone Pine beneath Mount Whitney part time the past three years, I’ve hiked the Sierra quite a bit, and I’ve been watching the snow reports too. But I listen to the local SAR sirens go off several times a week all year because average/normal hikers take advice from people like Skurka. They get in WAY over their heads.

Skurka’s (maybe out-of-touch) theories about snow and miles from an “expert” stance puts a lot of normal/average hikers at risk. His reports are intended for a different echelon of hikers, hikers with a lot of experience who can read between the lines and hike their own hikes. Really, Skurka (and hikers like myself) don’t have much to lose by weighing in on hikes we won’t be there for. We might as well educate and stoke caution. Very few hikers perform at the Skurka “ultra-hiker” level, nor should they push themselves to if they’re of average fitness and want to have actual, non-type-2 fun and stay safe. Fast-packing is a lightweight speed sport that does not belong in the Sierra until probably August or later. Skurka needs to be more clear that he is actually recommending that people really carry all the gear in the Sierra ’til August. Because he is. SKURKA IS ACTUALLY RECOMMENDING THAT YOU CARRY ALL THE GEAR.

Skurka posted a chart but I have problems with the way he used it:

Here is a similar chart, created using the same online script Skurka used, but with different years for comparison: 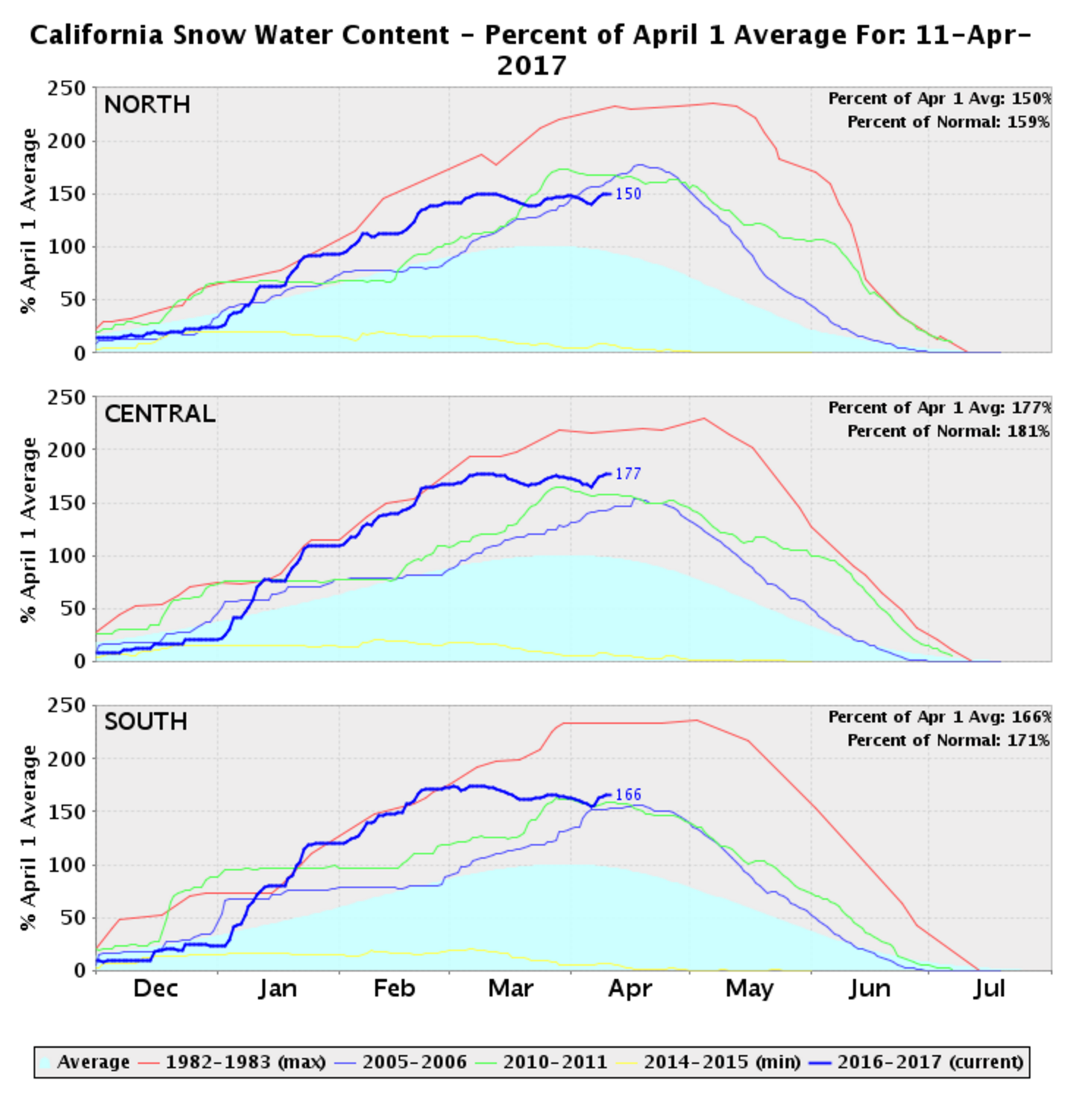 OK, so there you have it (in dark blue), the central Sierra is holding more snow water than it has for a very long time. More snow (water). In the central Sierra. Where the trail goes higher through steeper terrain. The green line was the highest snow year in recent memory (2011), which many hikers use as reference. The red line represents the highest snow water ever recorded. Hike in 2015? You had it so easy. 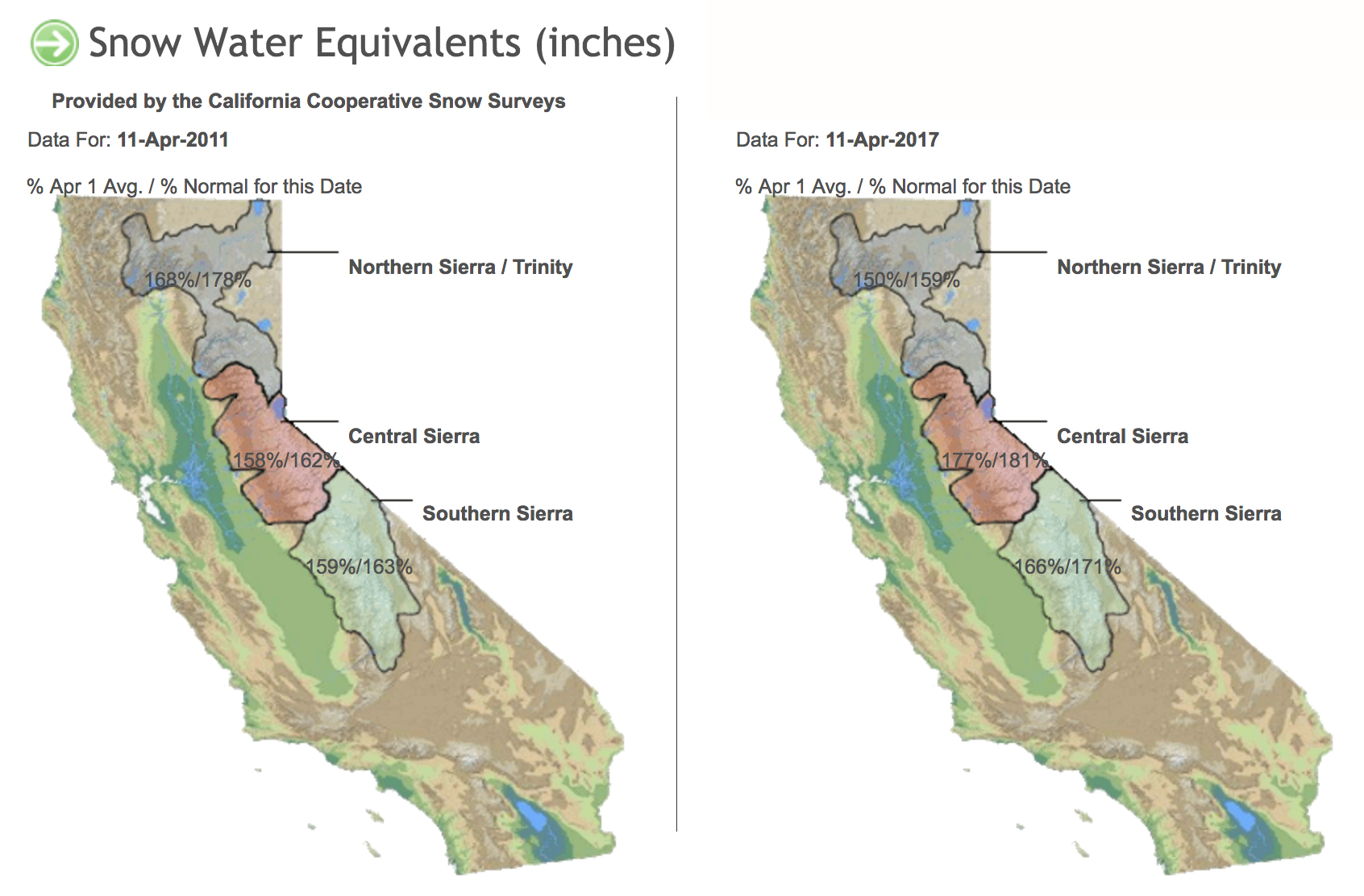 On the left is legendary 2011. On the right is 2017. You can verify it and look at other years’ snow water equivalents here.

Skurka was on to something here, but he didn’t quite elaborate what the dangers would be or stress them. I’m not sure why he and other hikers who also won’t be thru-hiking the Sierra this year have weighed in like “everything will be fine” as long as you have some basic skills. I’m going to be a little more clear:

I won’t promise you everything will be fine if you read some websites and watch some youtube videos. You need to buy and carry the “heavy gear”, REALLY research and practice skills, and if this is your first long hike in snow, consider not hiking the High Sierra or North Cascades in June and July.

So I said it. Sound sorta mean? Well, it’s because I believe in Leave No Trace, and those big bold letters are actually Leave No Trace principles in disguise. I’m getting tired of every time I go for a hike in the Sierra, rescuing people who are unprepared. That gets old really fast. And it’s scary, because if I got in trouble, who would rescue me? Someone who is unprepared?

As it starts to warm up (and we have already had some 80º days) high water content snow means a high volume of water. Runoff predictions for the Sierra stand above 200% over normal. Where does all the water go? Down, and it tends to bring things down with it, and it moves quicker on steeper terrain. 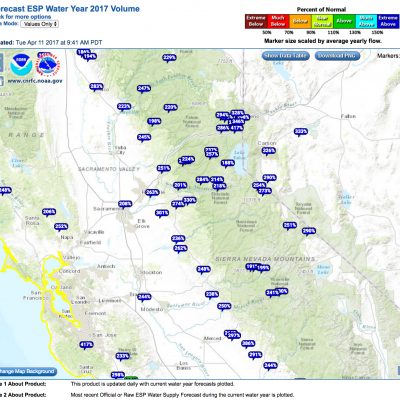 The Sierra has three major water drainages to the west, where thru-hikers travel when not traversing high passes. They will all be tough and very few have bridges. The drainages you will probably have the most trouble with, are the Kings and San Joaquin drainages. By the time you hit the major forks of these drainages you will have crossed many doosies of humdinger tributaries. You’ll be tired of crossings, better at crossings, and most likely anxious about crossings day and night. If you have ever been in ice-cold waist-deep water running a thousand plus CFS, then you’re ready for more, right? Do you know how to cross streams like this safely, keep your things dry, and recover from the chill? It’s really something to think hard about.

Other things to think about are if the “trail” has disappeared in front of you due to avalanches, landslides, or storms. What if services are not immediately accessible due to land slides on access roads (e.g. what if you cannot hitch out)? What if you lose track of a team member and are not sure if they are ahead or behind you? What if a member of your team falls into a turbulent river crossing? What if all your things, including your down bag and jacket, get wet? What if someone goes snow blind? What if you need to take extra days due to slow-going, injuries, getting lost, or a storm, and run low on food? What if very hungry animals get into your food? These are all “what ifs” that do happen.

The answer to this is: think ahead, consider numerous possibilities and how you would react, prepare well, and take your time. Carry the correct gear; it’s not the time to be a weight weenie. Bring enough food for a few extra days.

These are things you might not ordinarily carry the rest of your thru-hike, and might not need other years, but in 2017 I strongly urge carrying all of it. If you shop carefully, these items don’t have to necessarily be bulky or that heavy. Carrying gear doesn’t mean you automatically know when or how to use it. Do your research and when in doubt – use the gear!

I hate to fear-monger but I also sure hate hearing those SAR sirens and ridiculous stories emerging from the hills. To the people with the skills and the resources to handle surprises, I say: “go get it!” To all the people who aren’t quite sure and feel worried, I like to bring up some possibilities to give food for thought. If you feel like you can deal with the sort of surprises I’ve mentioned because you’re tough, resourceful, and prepared, I say, “go get it!” If you’re really worried but tough and willing to learn, prepare the best you can and surround yourself with other hikers with more experience.

Somewhere in the phrase “average big snow year” are the words “big snow year.” Denial and ignorance are not pragmatic approaches; they are dangerous and infectious pitfalls. Folks just need to be very realistic about their abilities and the reality of their situation. I’m meeting more and more people with this disconnect, and wishing they weren’t so deep in the woods.

I don’t believe 2017 is the year to attempt a Skurka feat. In fact, every time a hiker like Skurka says something is “easy” or “fine,” be honest with yourself. Do you have his experience? It’s not a year to attempt to fast-pack the PCT. It might just not be the year to thru-hike the PCT at all. It’s worth very careful consideration whether you would like to have an average year thru-hike, or whether you are out for a serious beating, need bragging rights, and can suffer disappointment.

It’s NOT A COMPETITION

Hiking Death Valley and the Inyos until the Sierra is accessible… 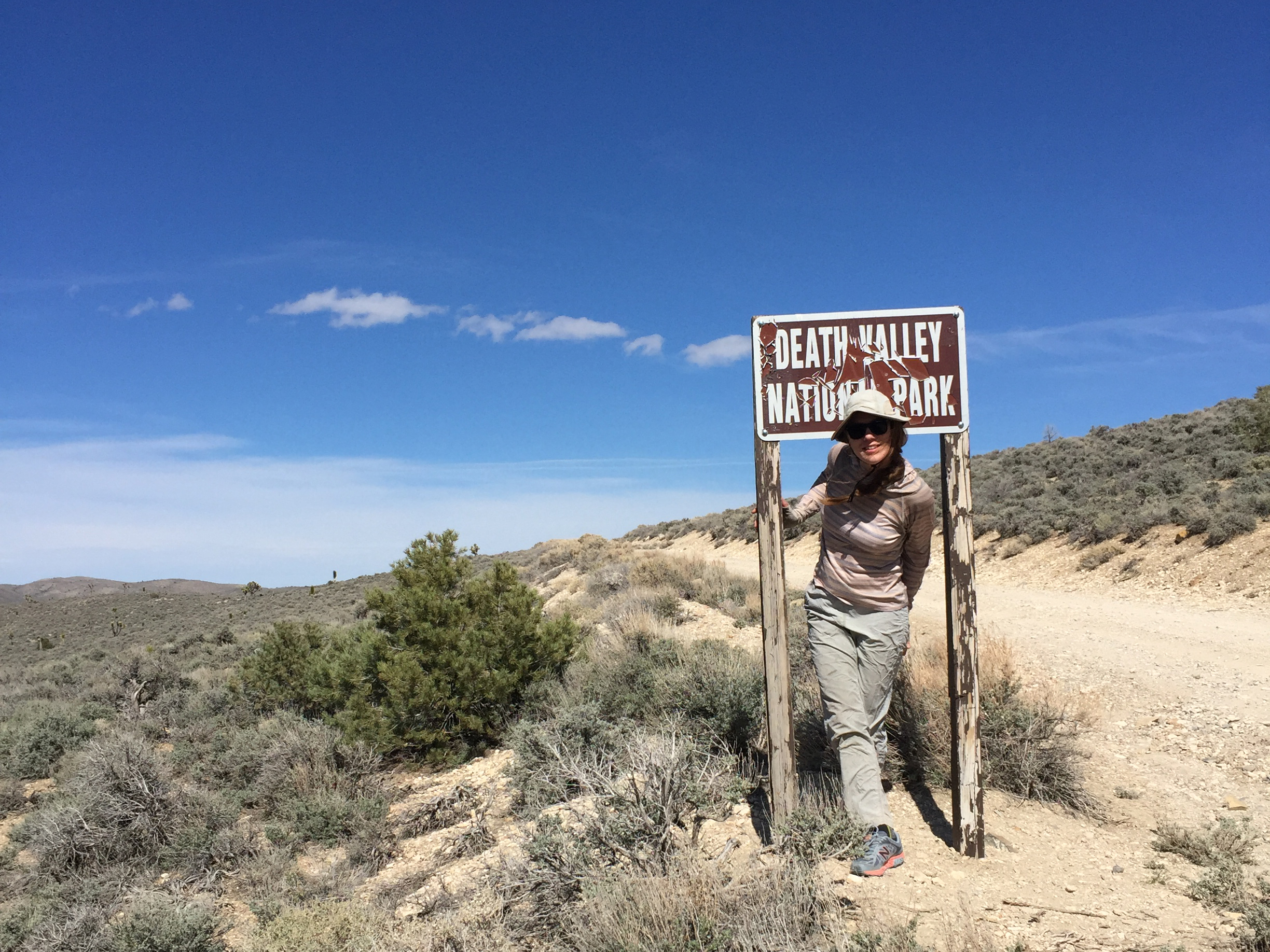 I’ve gained 10 pounds since Trump was elected. I think it was that and the 2 gallons of water I carried thru Death Valley that fractured my foot again. My foot is a weight weenie. Note:
it rained on me the night I took this picture.
(advertisement)