In the middle of October, after having finished an amazing L2H hike with two great guys (Bulldozer and Abram), I was looking at wrapping up my season and heading back to Portland to spend the holidays with my mother.

But it was driving me crazy that I hadn’t finished my Sierra High Route hike. I walked around Mt. Williamson, summiting two 14ers to compensate, and I made some excuses, but still it was driving me crazy when I wasn’t trying to put it out of my mind. I’m not sure I’d feel right if I didn’t complete the SHR in one season as I intended.

LoveNote showed up in Lone Pine and planted the seed again, a few days later. When I told her my excuses, she (and her dog) gave me this look: 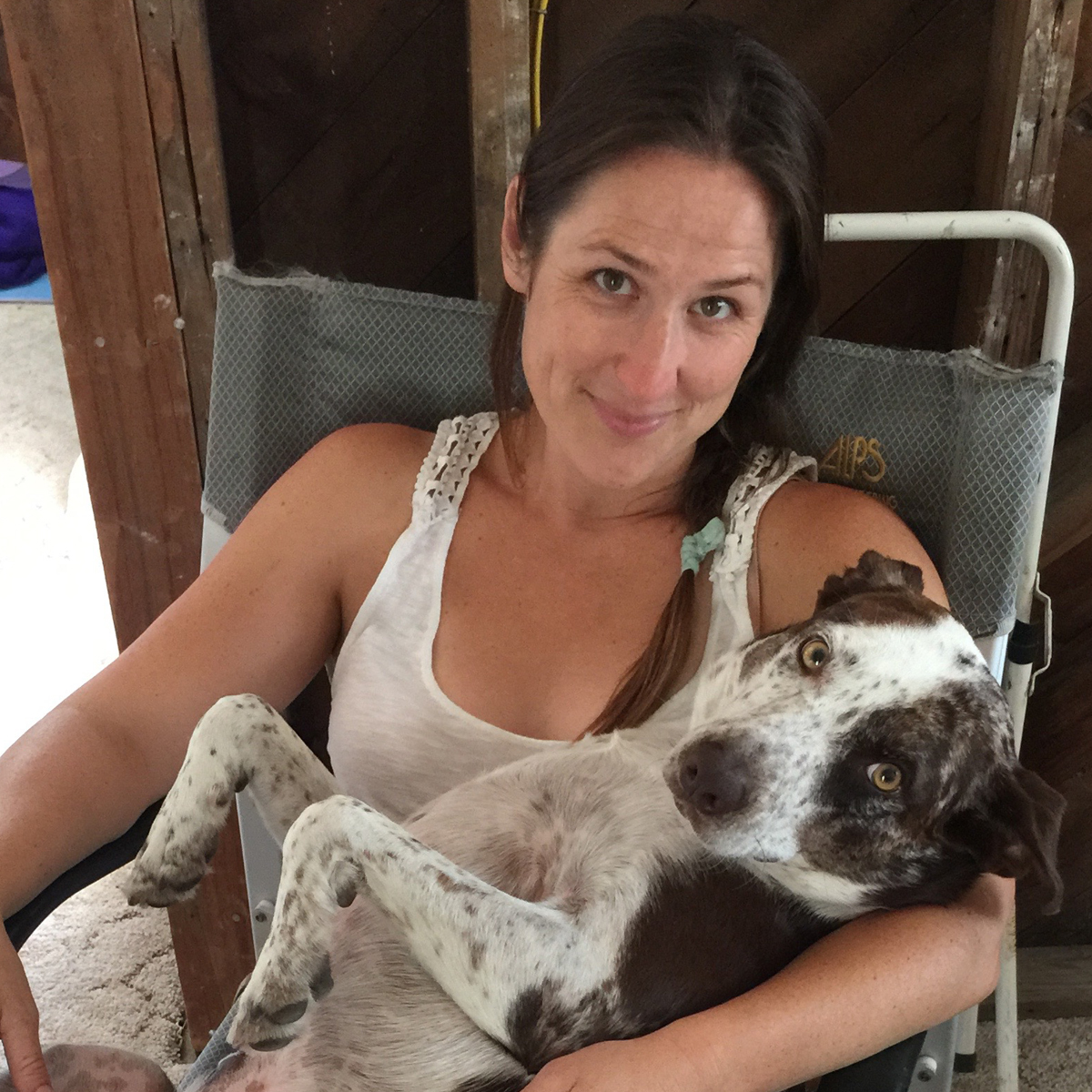 The Look® (well, one of the looks) that sees right through the bullshit.

And that did it. Next thing I knew I was at the permit office and at a gear shop, making last minute preparations to hike into the High Sierra despite the snow and cold and smouldering fires and bears and whatnot. I put all my things back in my backpack, pulled together the last crumbs of my summer’s backpacking rations, and jumped into LoveNote’s car – the next day. Just like that. All it took was that look. Next thing I knew I was climbing over Kearsarge Pass and hiking down the Bubbs Creek trail towards the southern terminus of the SHR. And since that’s not officially part of the SHR, I’m posting photos of this amazing trek separately.

To be honest, I was a little nervous. The forecast for the two days out from my departure included possible rain: snow at elevation. I would be alone. I wasn’t able to borrow an emergency locator device on such short notice. I hadn’t covered this territory before. But I had been studying the route for months, and was ready to go for it! 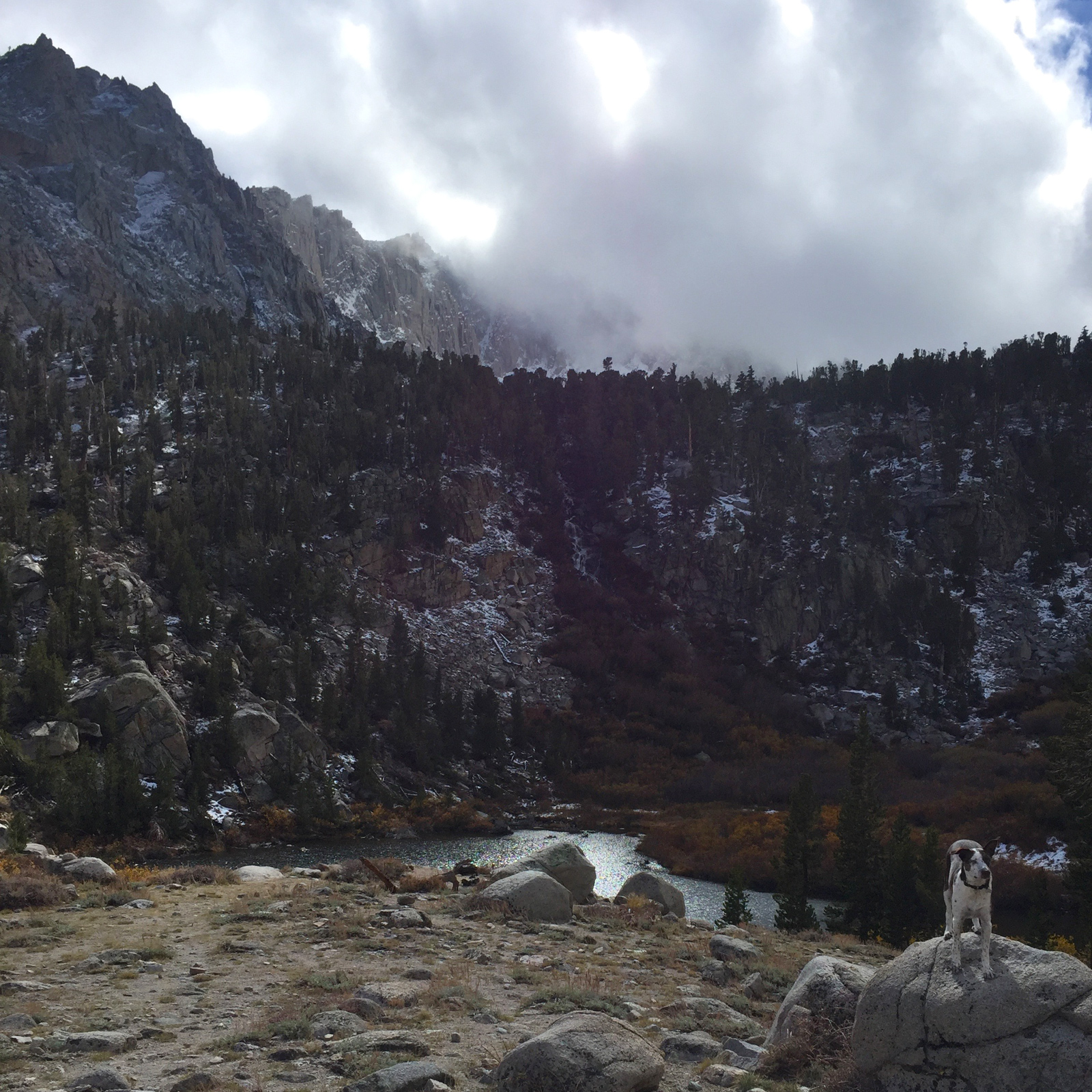 The wonderful Huckleberry poses for a picture. He must be one of the very most well-trained dogs I’ve ever met, and has a trail pedigree.

A quiet, strange scene. LoveNote and Huckleberry have turned back to the car and I’ve passed who will be the last hikers I’ll see for the rest of this trip. 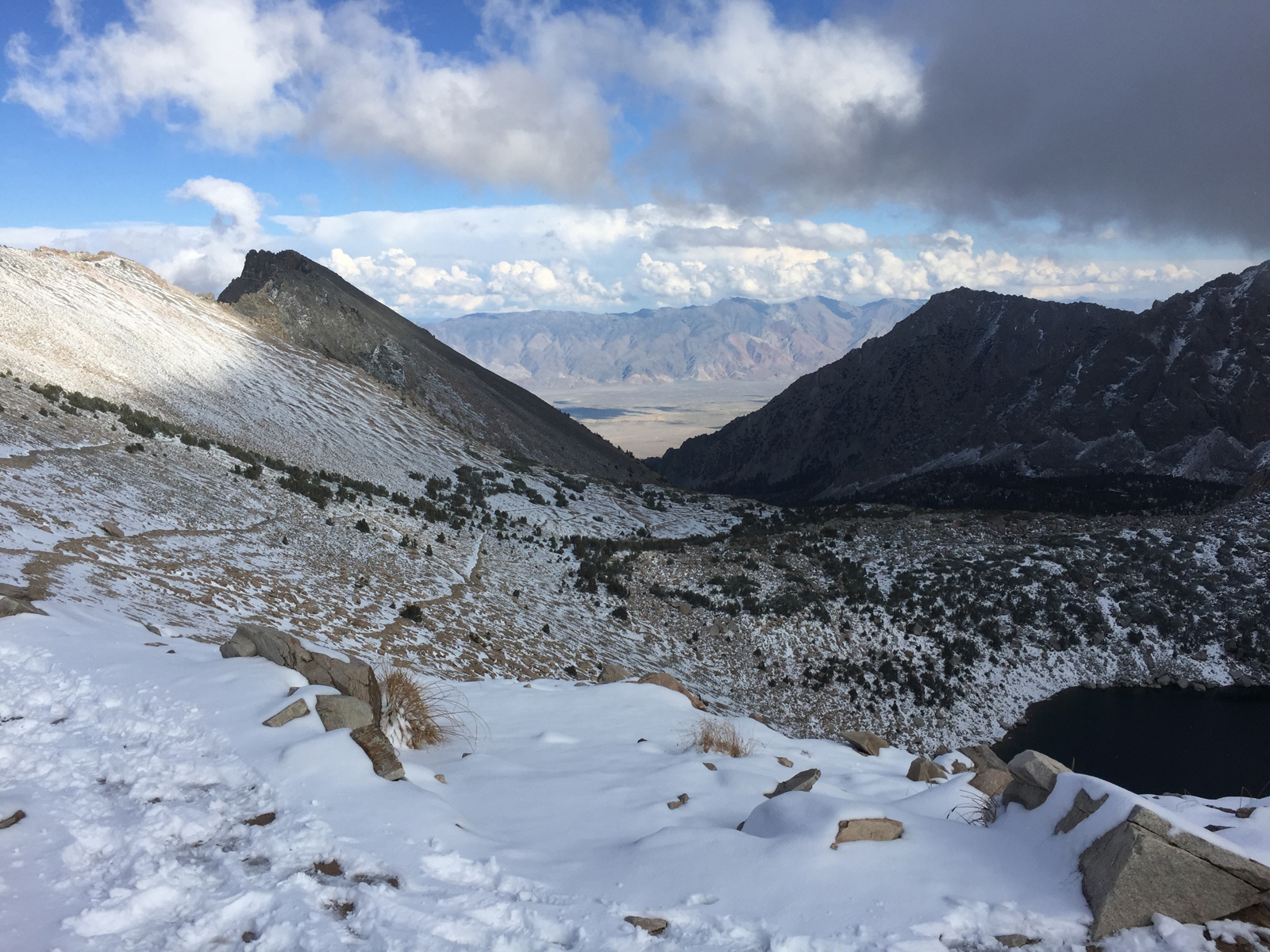 A view east towards Owens Valley from Kearsarge Pass. 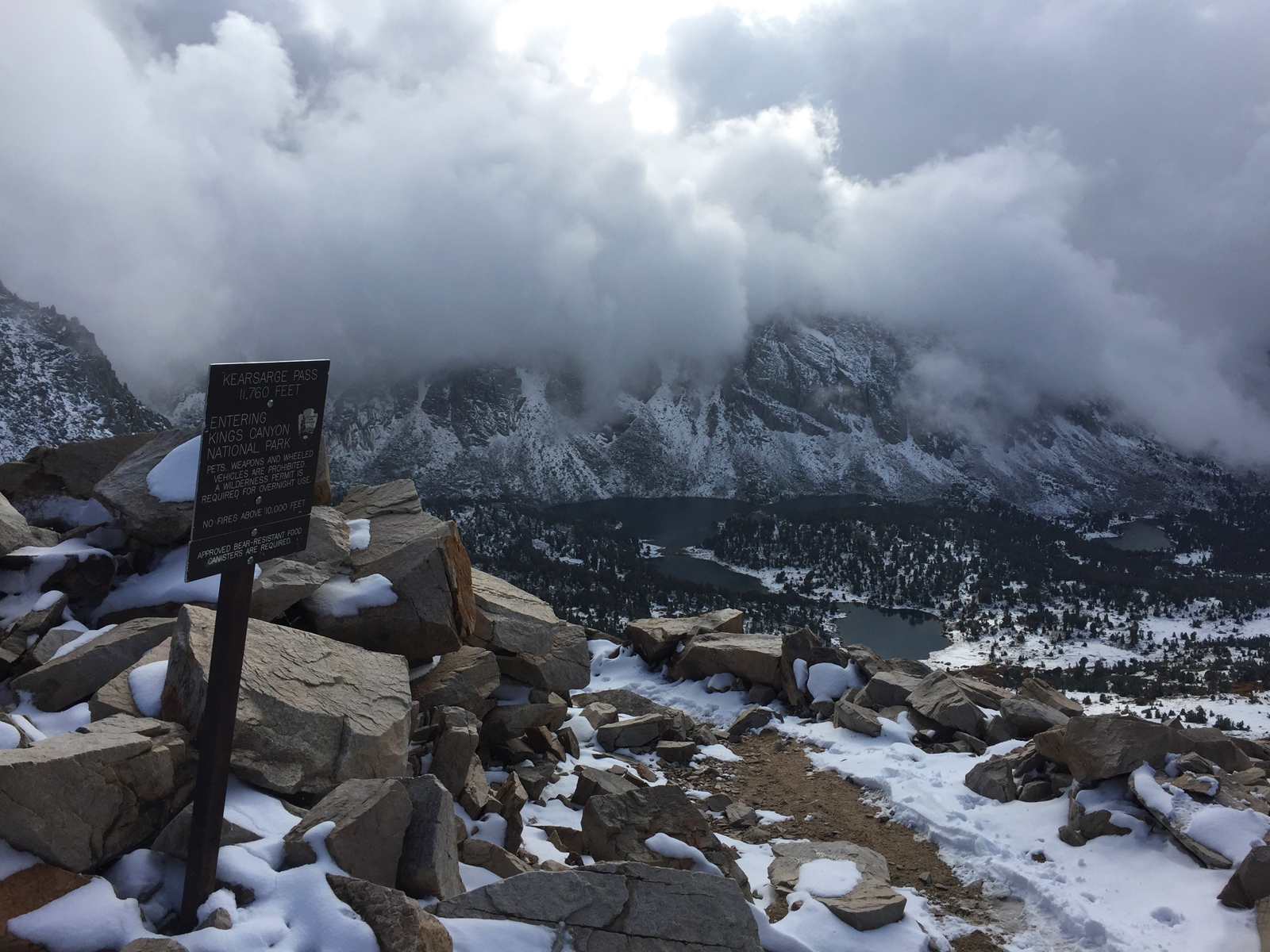 A view southwest from Kearsarge Pass of Kearsarge Lakes and Bullfrog Lake. 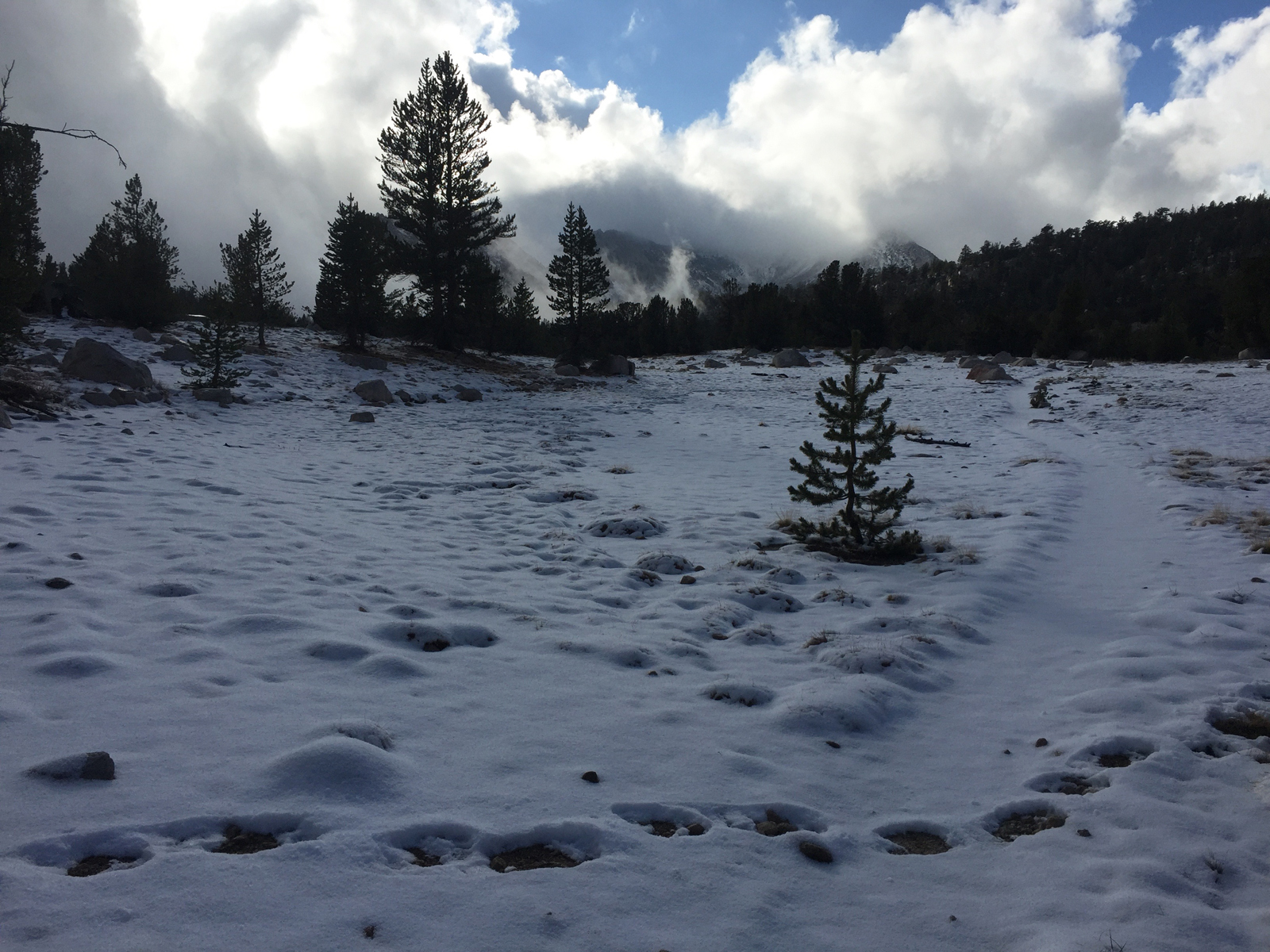 Snow really makes animal tracks stand out, lots of them. In this case it was, erm, a bear. No big deal. Just a very big bear. 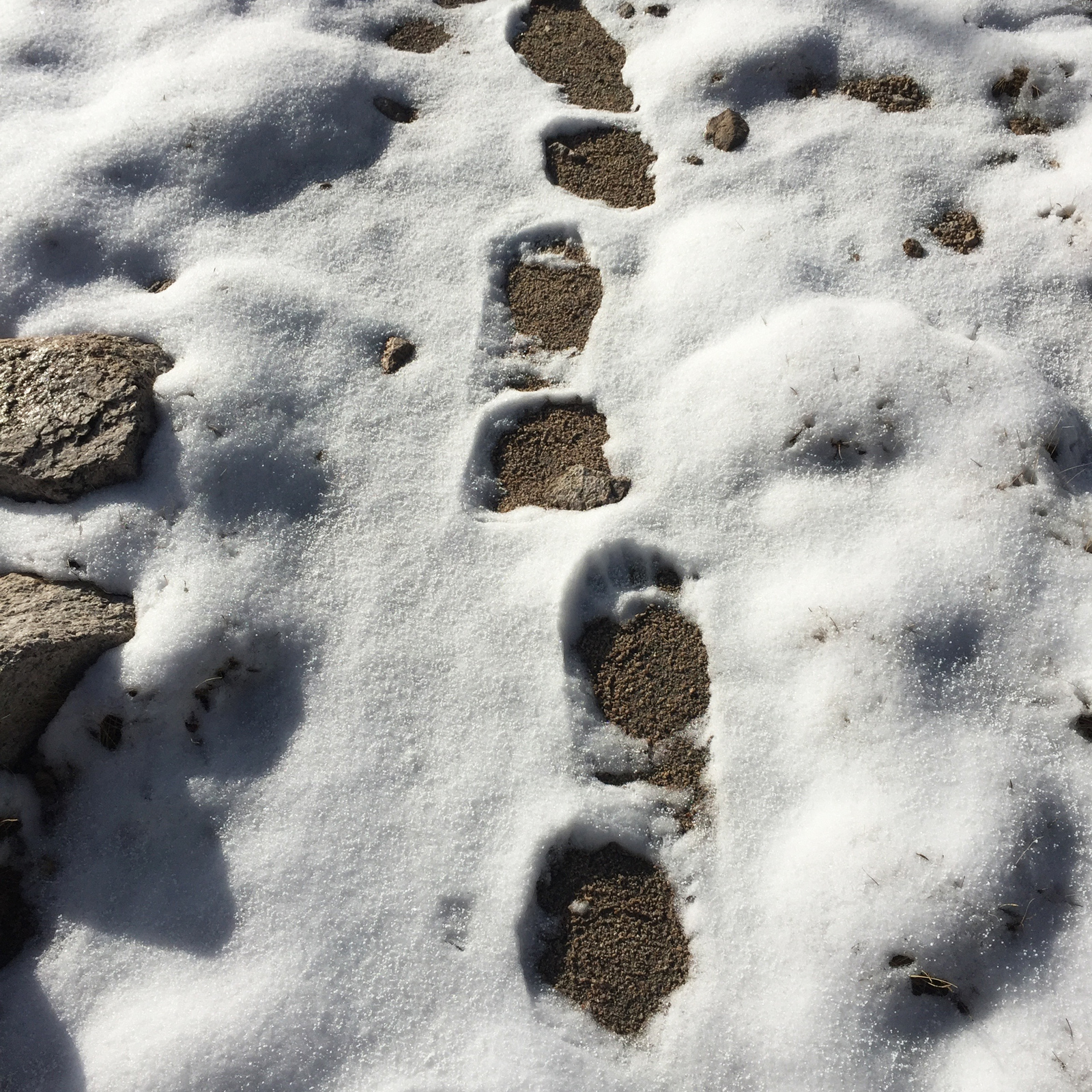 A close of up view of these huge bear tracks, the biggest I’ve ever found! 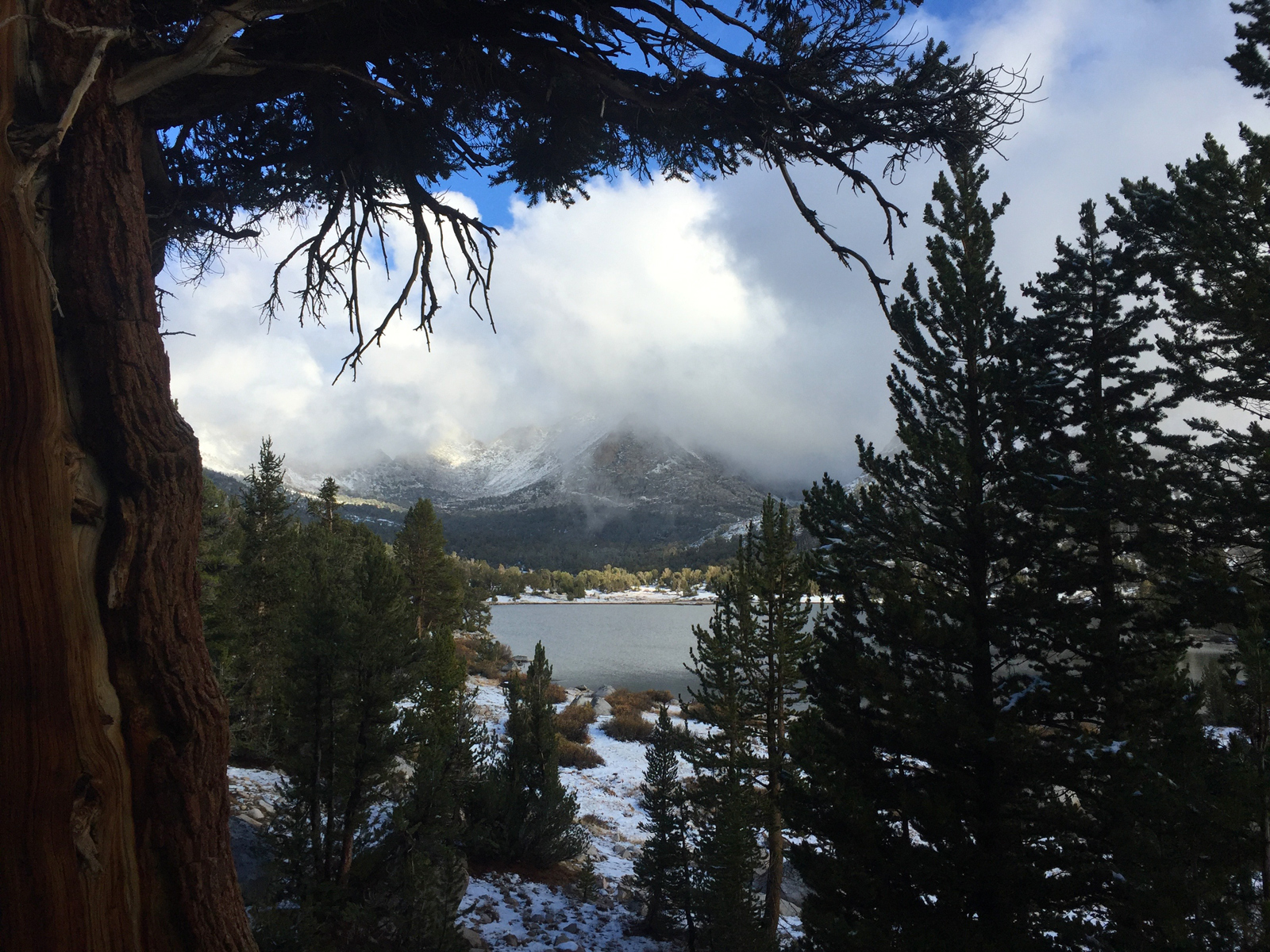 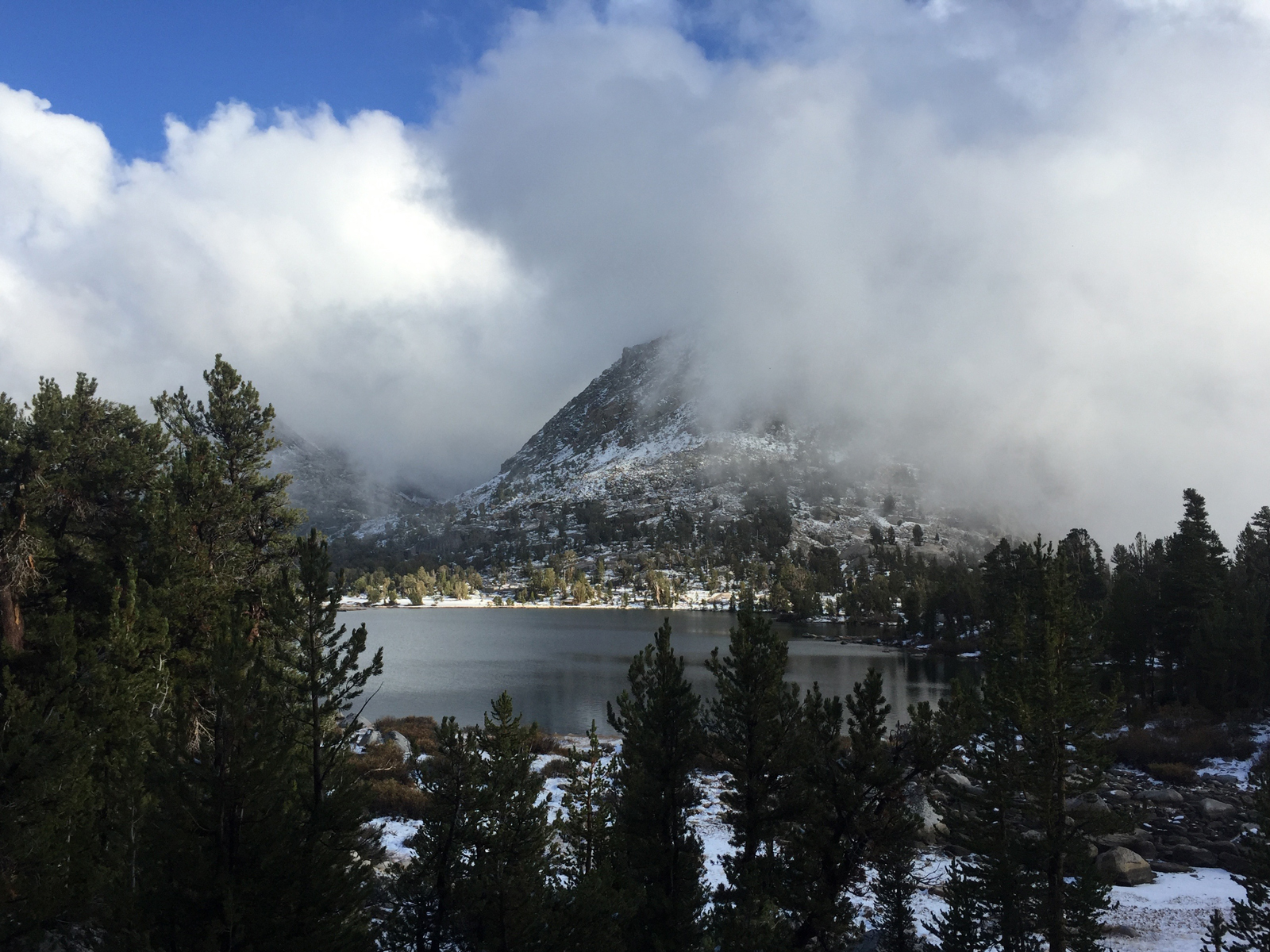 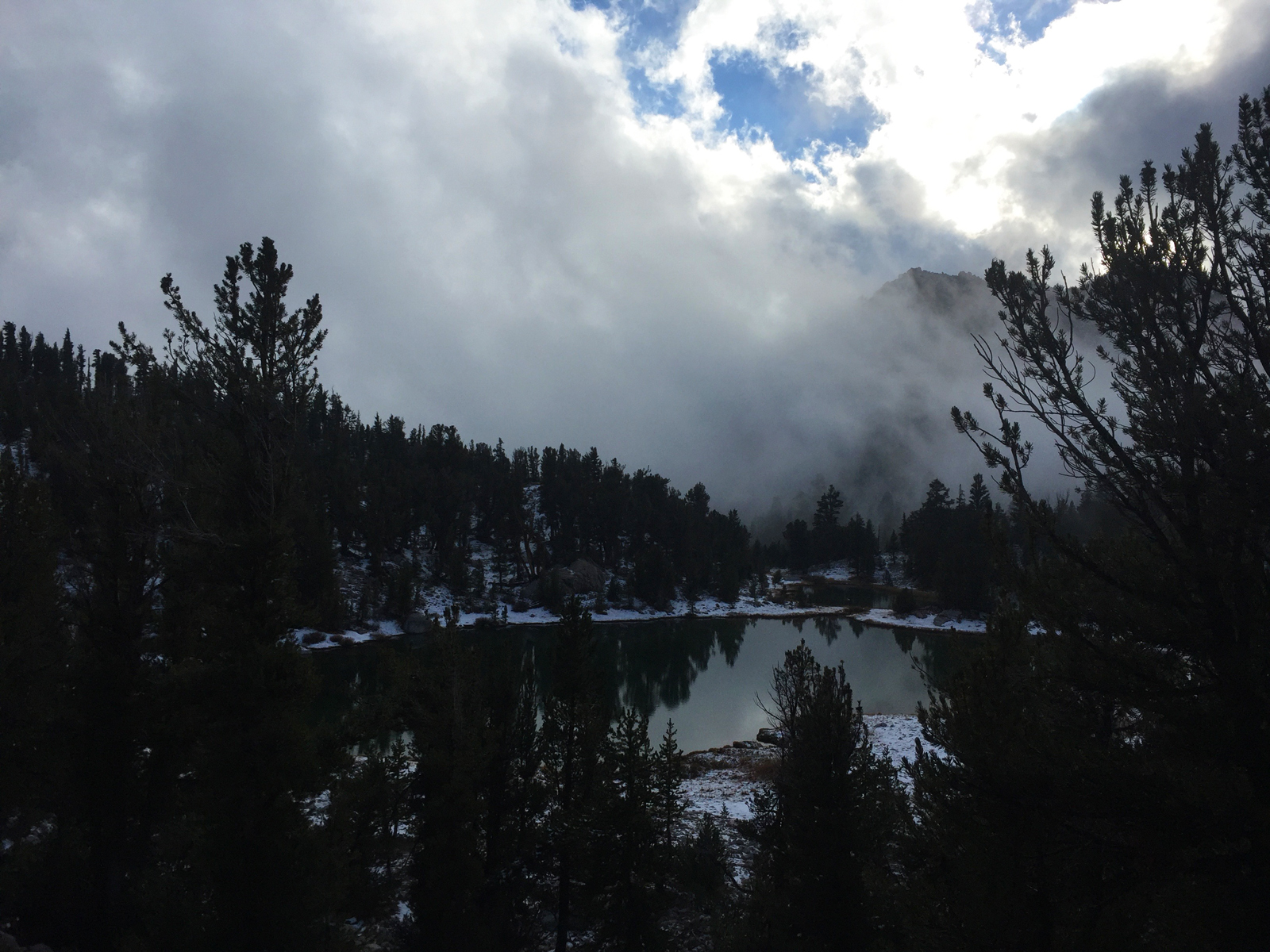 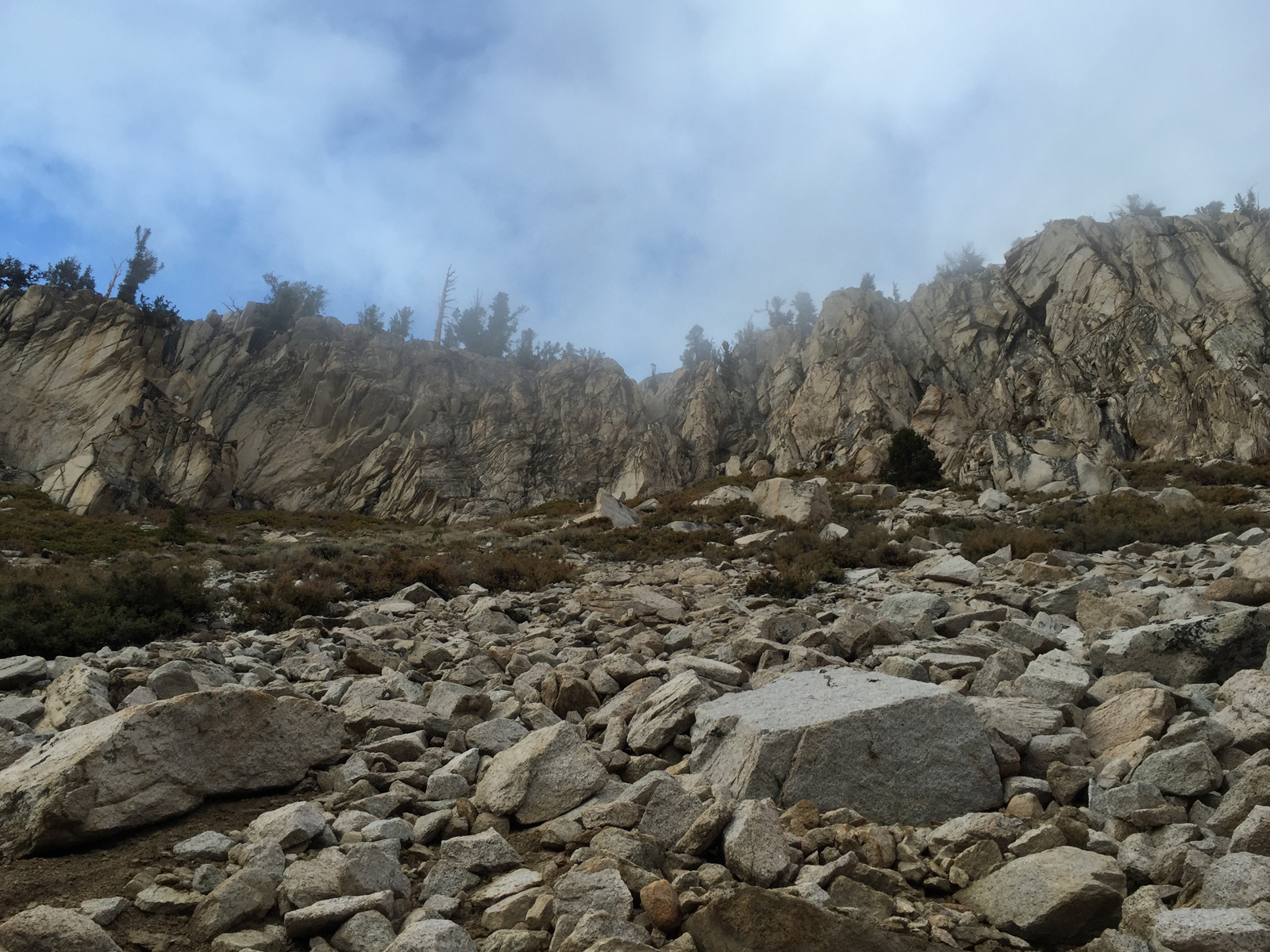 A massif face possibly familiar to anyone who has hiked the PCT and exited via the Bullfrog Trail and Kearsarge Pass.

Bubbs Creek is a treat to walk along for obvious reasons. Folks who have hiked the PCT or JMT north of Forrester Pass have enjoyed Bubbs Creek, but after Vidette Meadow, Bubbs heads west and that trail heads North. But to anyone with time or curiosity, I recommend following the Bubbs Creek trail west sometime from Vidette Meadow or maybe even attempt the Rae Lakes Loop. Try something new! 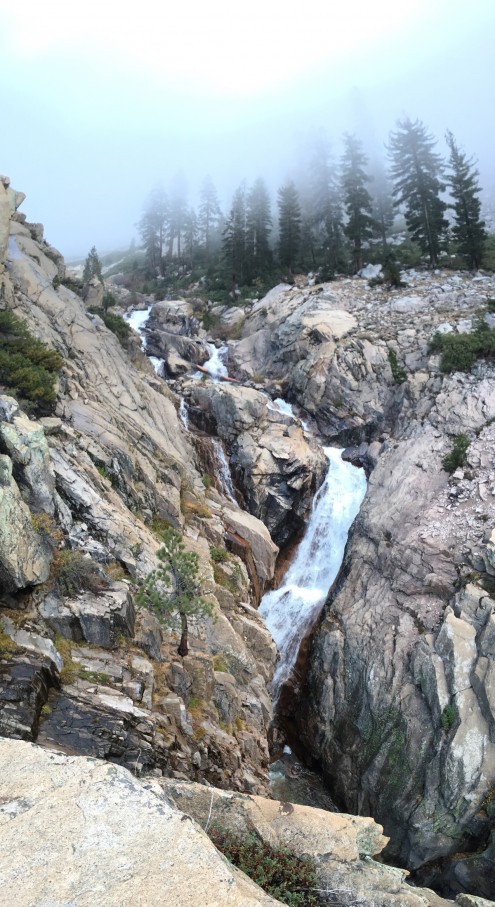 A Waterfall along Bubbs Creek 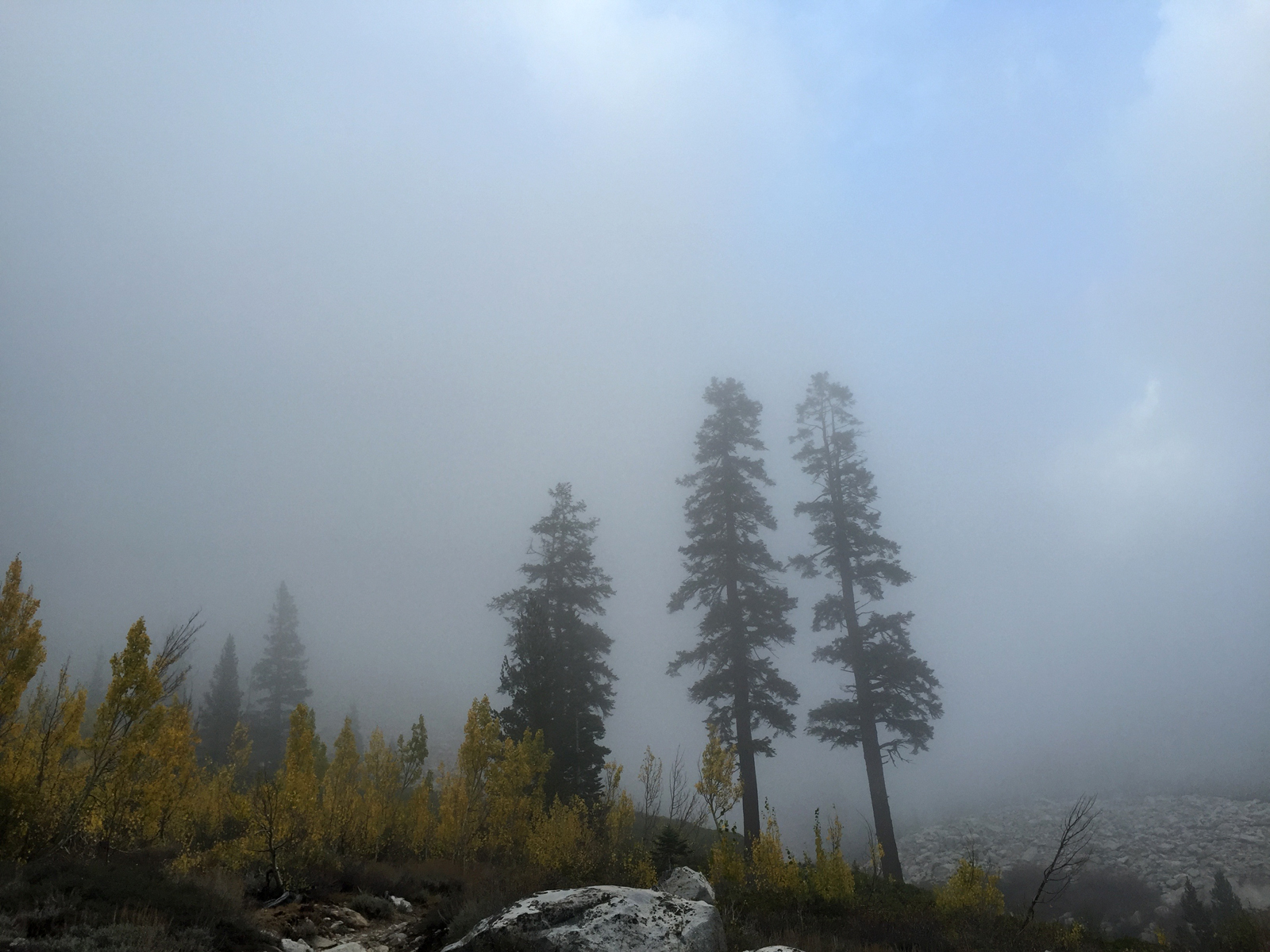 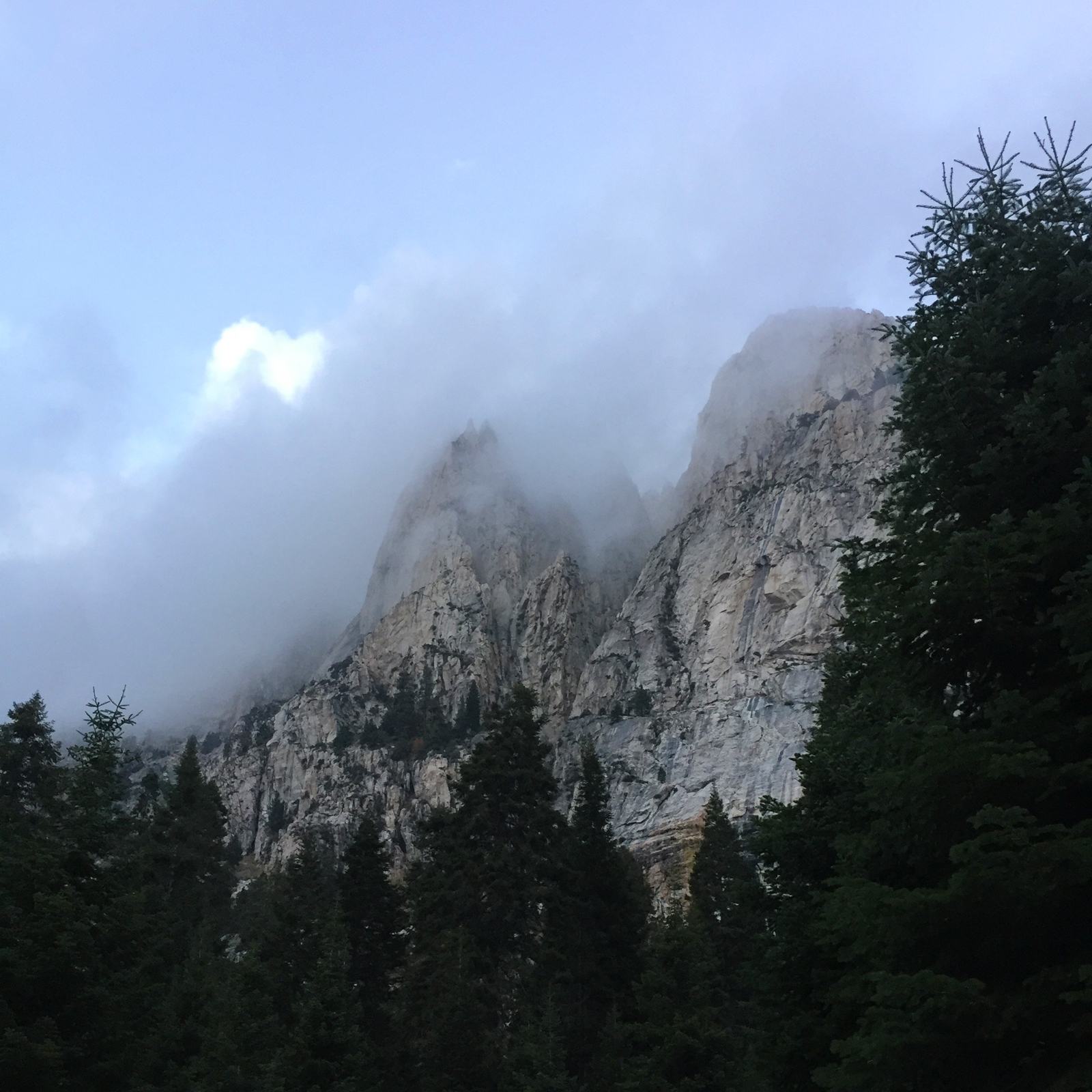 My night night view from camp near Junction Meadow. Prominences under mount Bago, caught in clouds.

That was a very, very cold and wet hike in. The moment I hit the top of Kearsarge Pass, brisk winds took away any doubt that summer was over. There was a bit of shivering and some numb toes but it was so worth it. Ten miles in and light fading, I crawled quickly into my tent, worried a little about moisture and condensation, but fell asleep quickly. Everything was wet in the morning but as you can see from the following pictures, the sun peeked out from behind the clouds and I was able to dry my things before descending all the way to Roads End. It was such a beautiful morning! 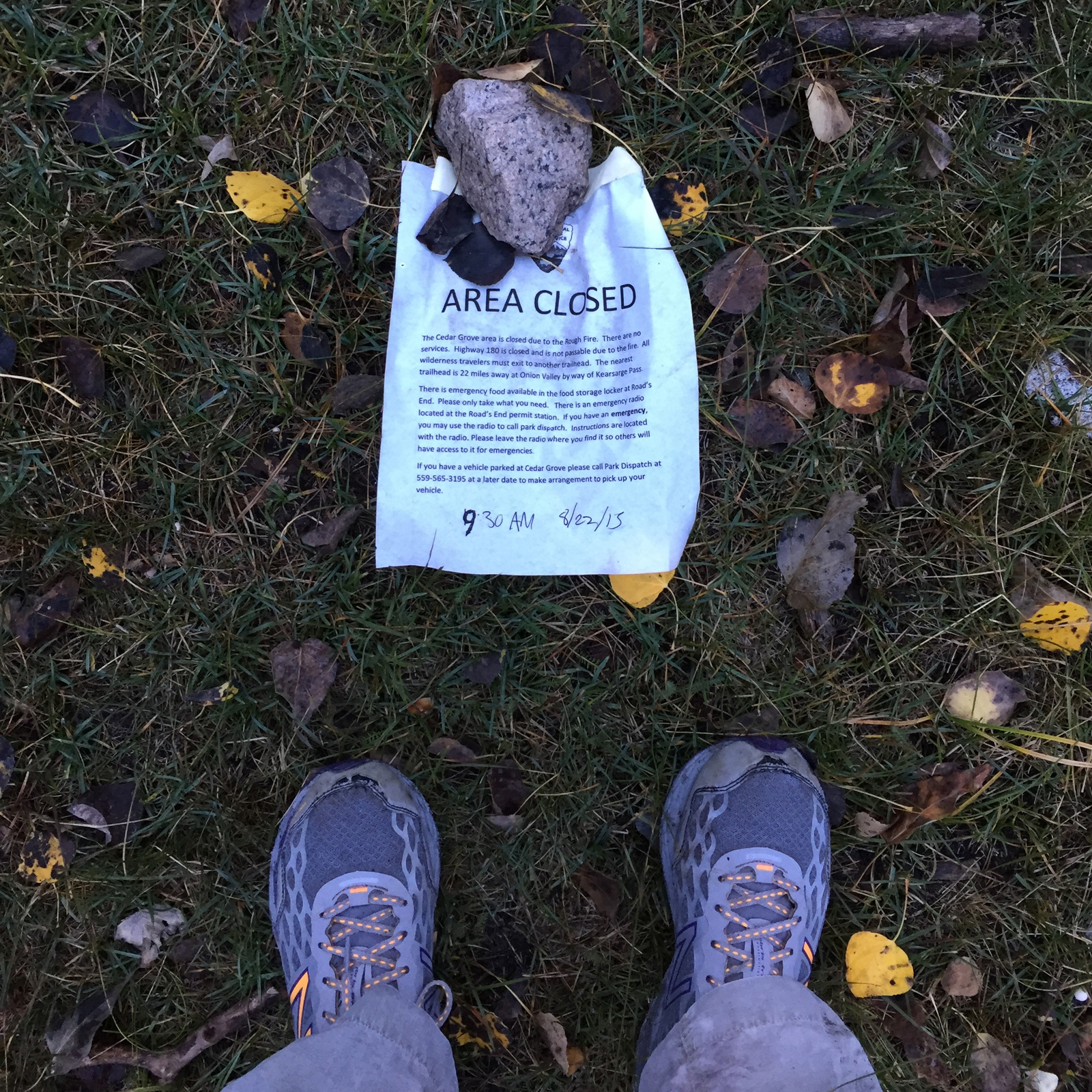 In the morning, at Junction Meadow, I found this note. Someone had put notes all up the trail to Vidette Meadow, but nobody had taken them down yet. Yes, very wet feet (and trainers)!

Roads End was not technically closed if you were/are able to walk in 20 miles by trail from the east. Accessing this area on non-official business by car will be impossible until Spring 2016. And so that is how I got millions of acres of Kings Canyon National Forest to myself. 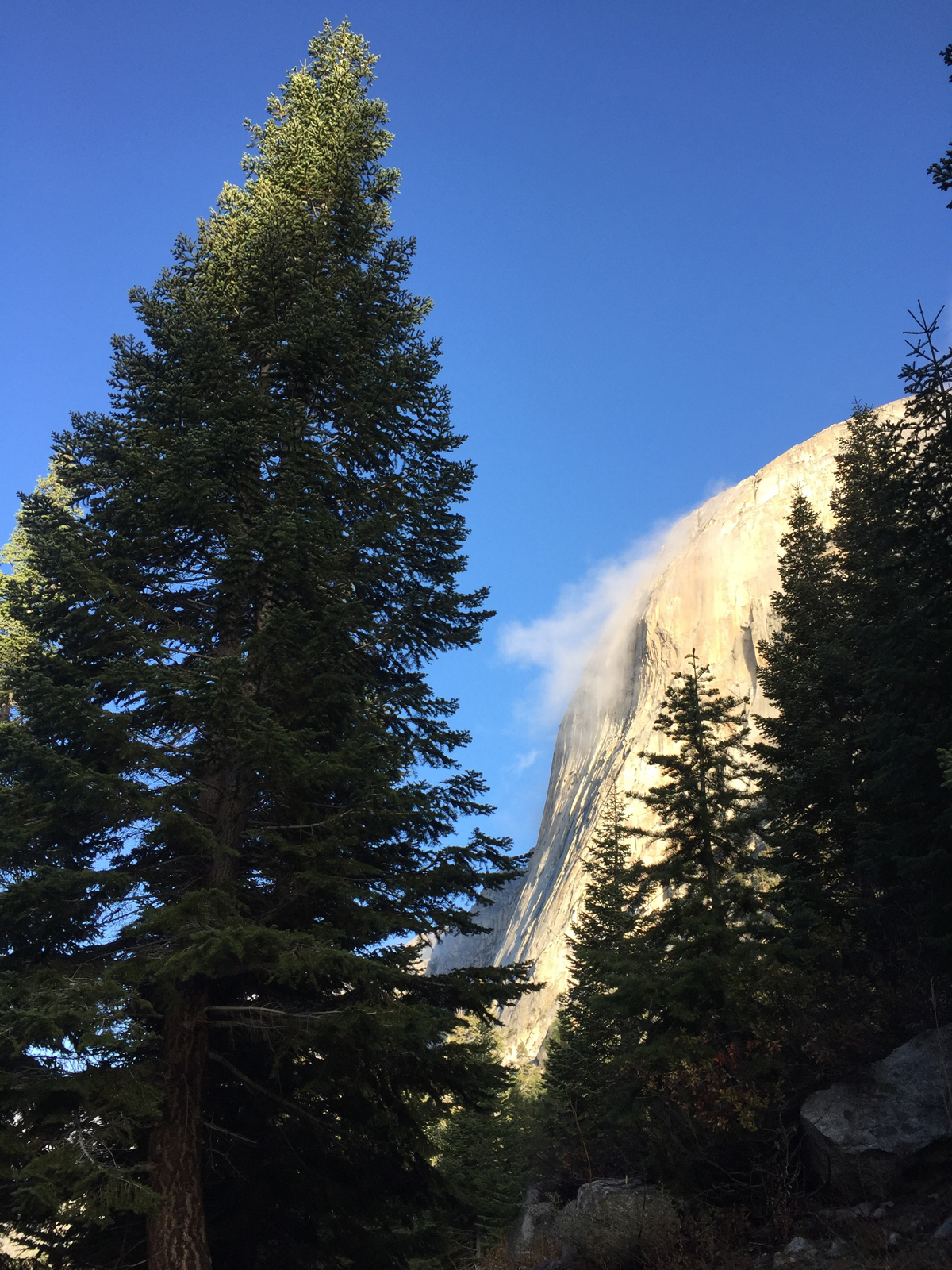 Morning views from the Bubbs Creek trail. Clouds are still clinging to everything. 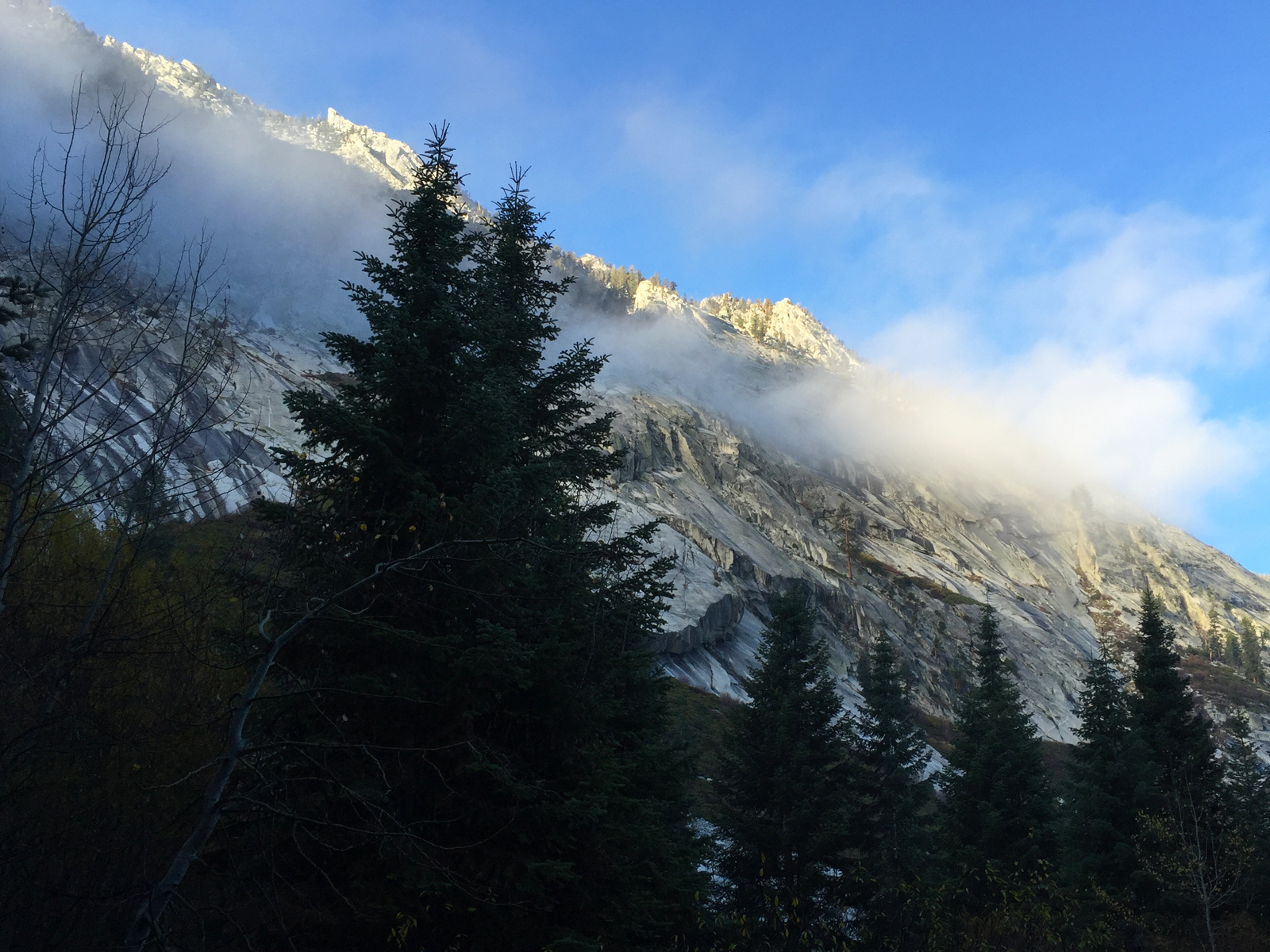 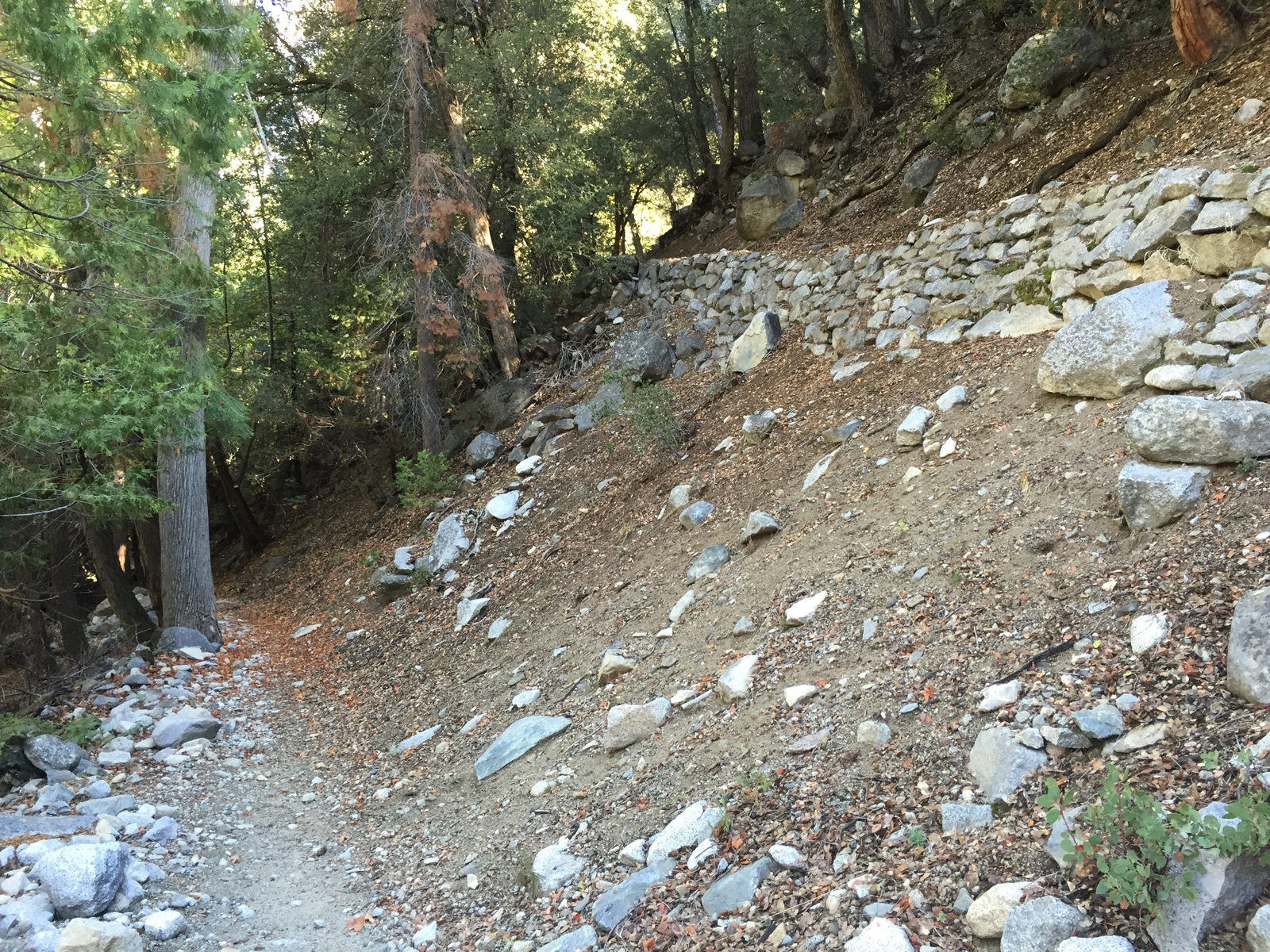 Thank your local trail builder. The Bubbs Creek Trail was rough in places but still an utter treat — one of my favorite hiking trails yet! 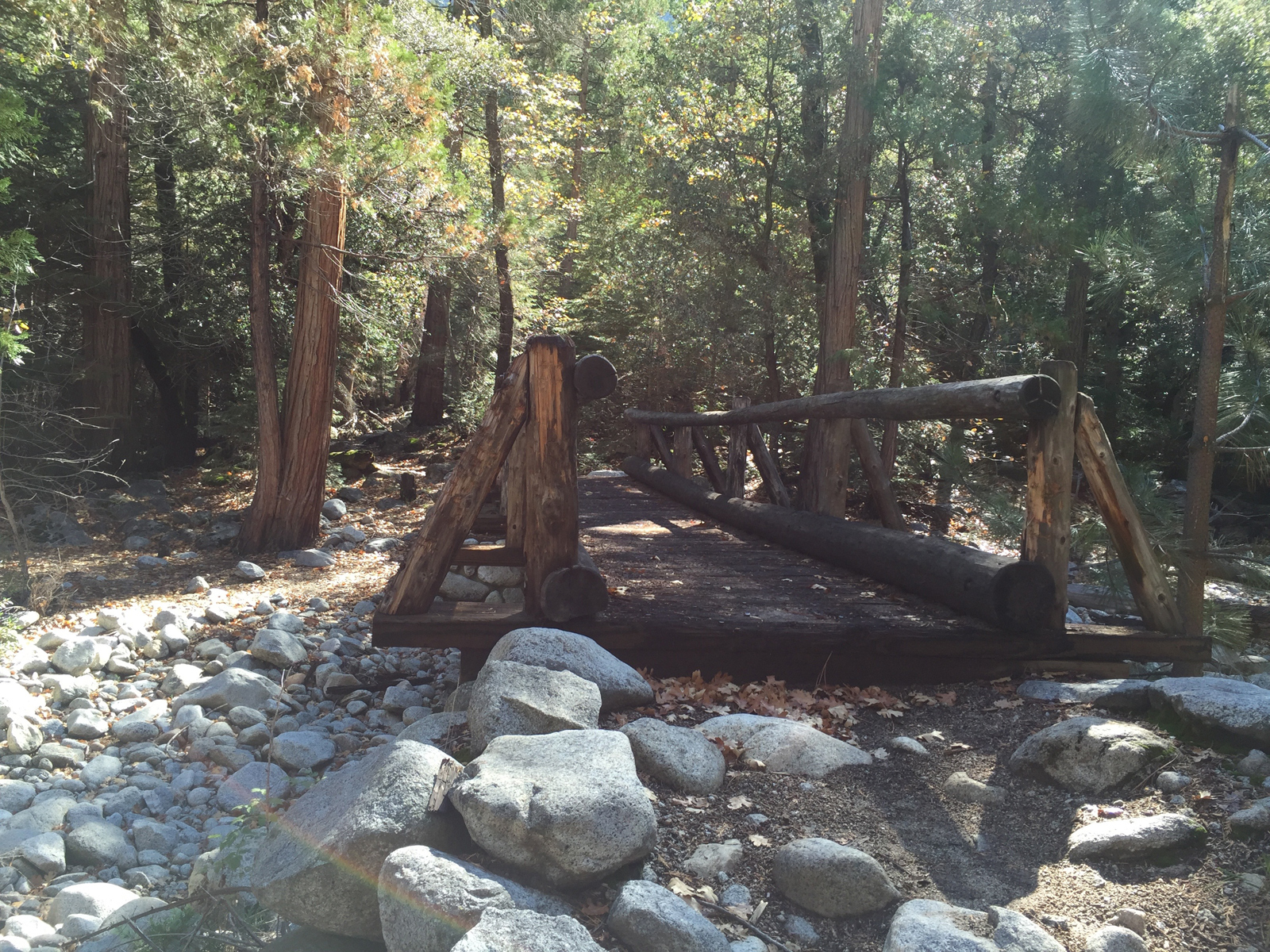 Several bridges span dry creek beds, but if the snow keeps up I’m sure they’ll be useful in the Spring. 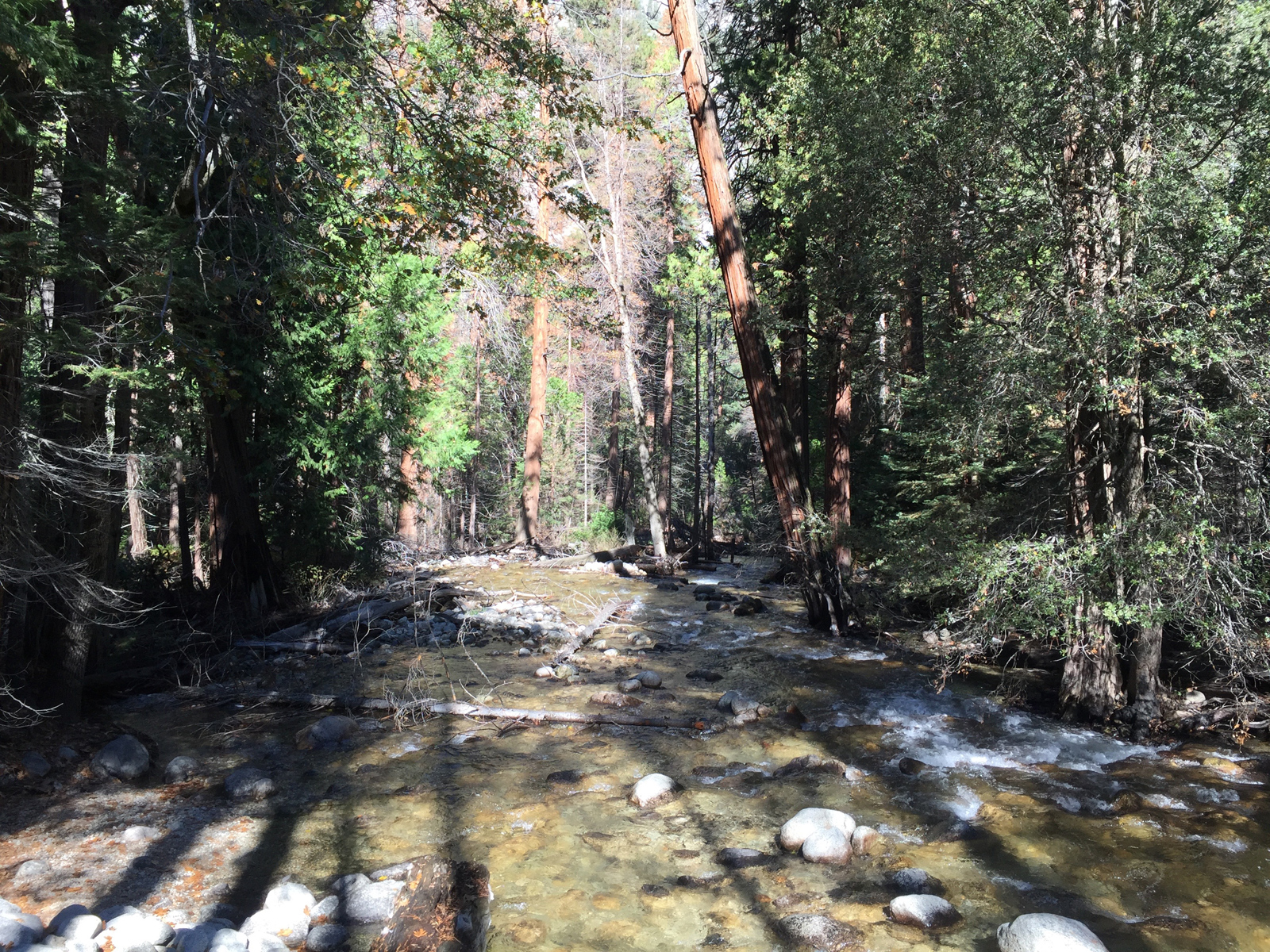 Bubbs Creek grows and grows and by the time you are down the hill to Roads End, it is quite wide and shallow. Still, people drown in it every year. 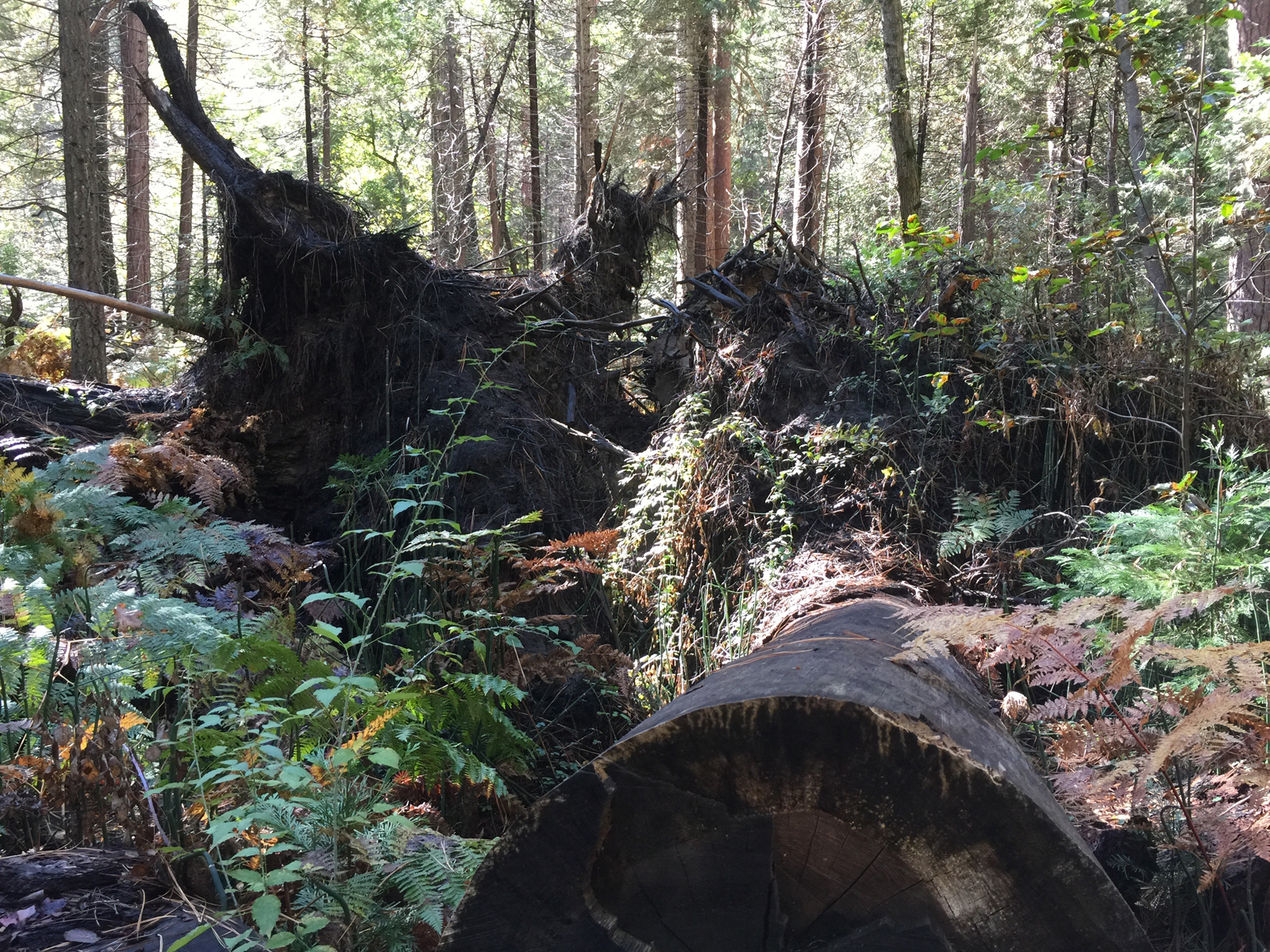 More Roads End old growth . The fire that burned near here covered 151,000 acres, a major loss. But still, the fires are also rejuvenating, and make me even more appreciative of the un-burned forest. 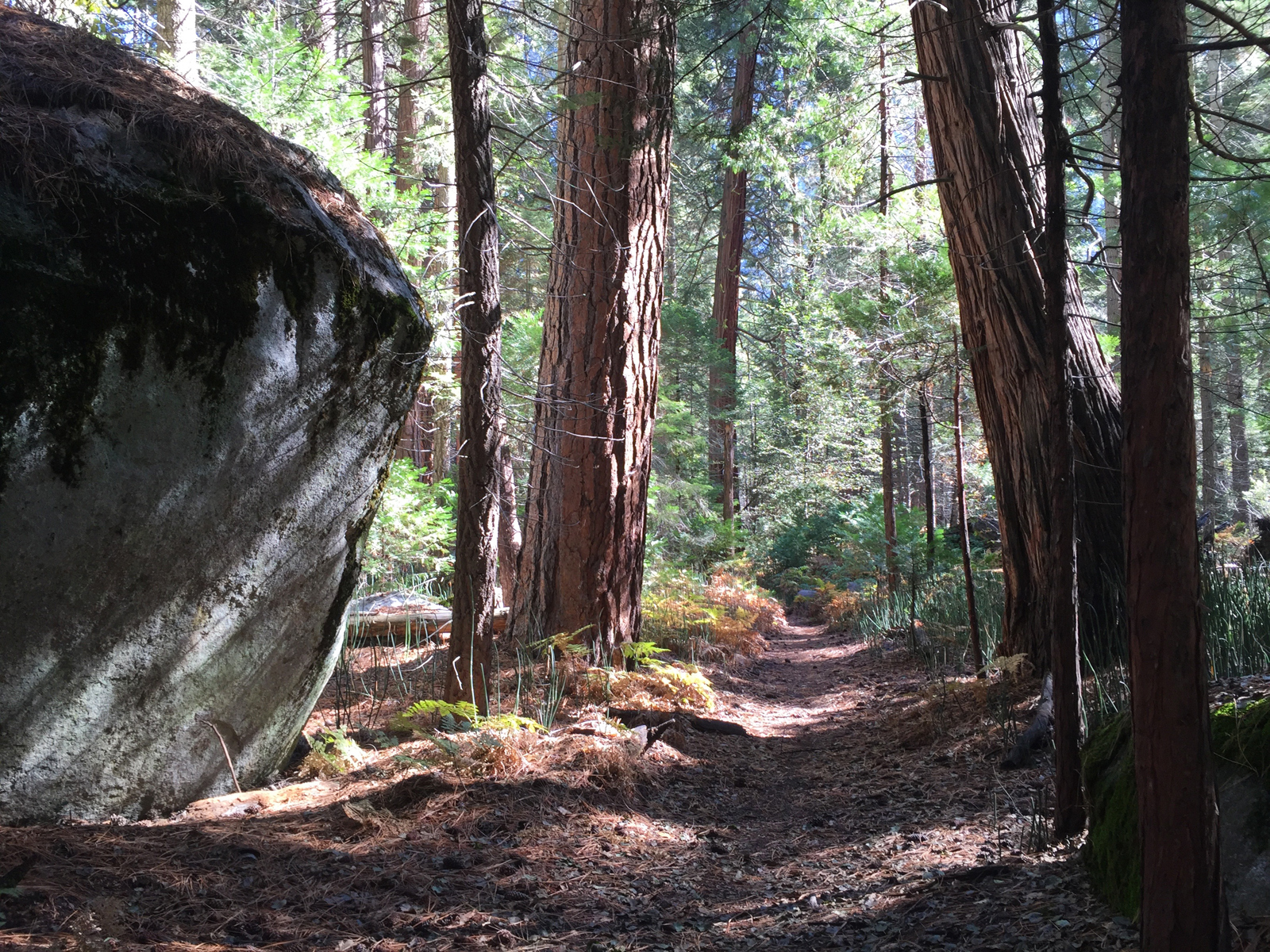 Old growth near Roads End. Let’s put this into scale: those sequoias would take a few people holding hands to reach around. So, that erratic (rock) is simply enormous. There might be dinosaurs somewhere… or big bears!

I can only hope that it is true that Sequoias are well-adapted to surviving wildfires, and that the evidence in the snow of so many animals scurrying about is evidence that so many of them escaped the fire. Yes, I’m sappy like that. I can’t emphasize how cool it was to be back there alone. I’m so glad that LoveNote gave me the little push… and a ride to the trailhead… and a personal escort half-way up the pass! 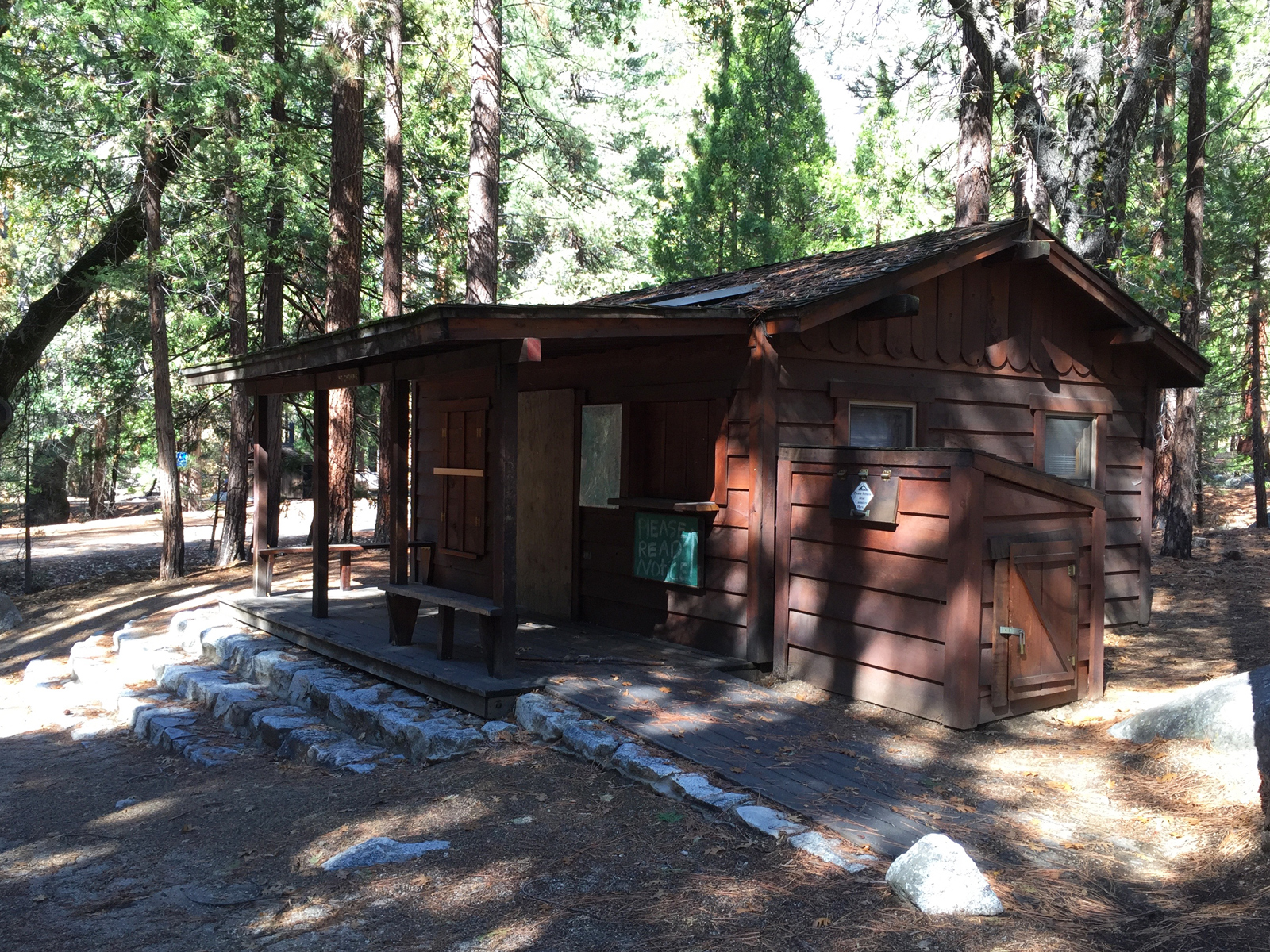 Roads End was very quiet & tidy, closed for the season due to the Rough Fire. 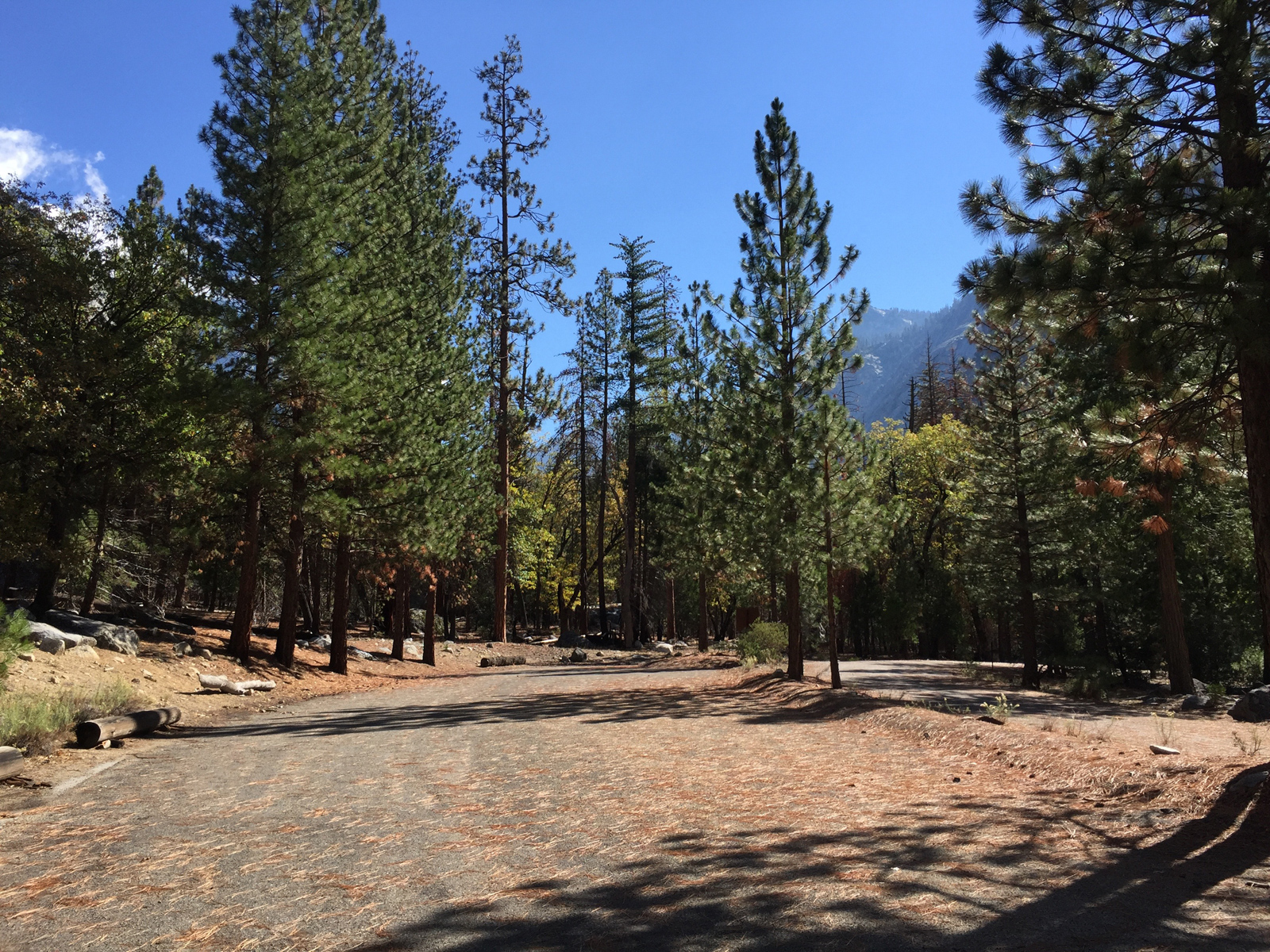 Road’s End was a ghost town. Many of bear vaults were full of rotting food, staples, and wine, as if people had truly evacuated urgently. If I weren’t climbing 5000+ feet that afternoon, I would have certainly had or carried wine out!

The Rough Fire was a major obstacle to my completion of the Sierra High Route hike. I had to wait an extra month and pushed into very late hiking season to achieve my goal. It was awkward and uncomfortable, but also exceedingly special and beautiful for me to have the opportunity to go back there in the snow, alone — totally alone — in the Sierra.

I felt, and feel, very blessed.