This is a post about trail angeling and trail magic on the Pacific Crest Trail (PCT), and why perhaps it has become detrimental to the trail and trail culture.*

Between 2013 and 2015, whether because of the “Wild” movie effect or due to an influx of Appalachian Trail (AT) hikers wanting more trail time or even triple crowns, the population of thru-hikers on the PCT doubled. The Pacific Crest Trail Association (PCTA), a governing body of sorts in charge of maintaining access to the trail, again issued permits arbitrarily and for free — several thousand of them.

Between April 6 and May 1 this year, I camped out at mile 42 of the trail, doing backpack shake-outs at Mt. Laguna Sports and washing dishes at the Pine House Café. Between May 1 and May 15, I worked with trail angels Ziggy and the Bear in their home at mile 210. I met most of the hikers and feel maybe comfortable saying this: overall they’re a bunch of privileged white people. 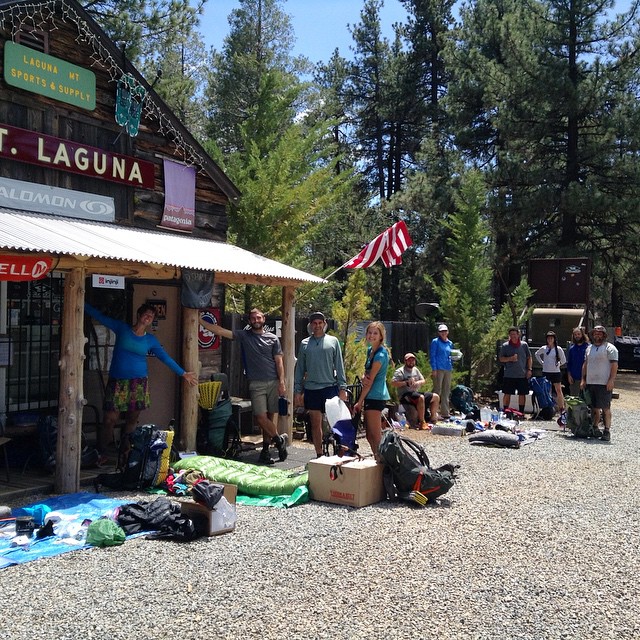 They do not need your trail magic.

They are people with the means, either the money or the brains or both, to take 4-6 months off their lives, outfit with thousands of dollars worth of gear and food, and walk through the woods. Very, very few of them are minorities. And only a handful of them are as poor as they would lead you to believe. Their daily grind consists largely of eating, walking, and sleeping, and their agonies consist of blisters, tendonitis, and not being able to walk portions of trail. Meanwhile, off trail, other people struggle to pay the bills and put food in their mouths.

And we celebrate these heroic hikers. Because they are walking a gorgeous, buttery path that was laid open to them without a single requisite or demand. Because they are free and bold and brave and doing what we wish we could do: avoiding work and the “real world”; enjoying a seemingly-endless vacation.

We are creating a monster.

Don’t believe me this change is happening? Look what’s happening on the AT – misbehavior on Katahdin might cause an AT re-route.

No longer is the PCT a remote and rugged outdoor way-finding experience; it is one big celebrated party along the trail, house and camp to house and camp. I remarked on that in 2013, and I thought it was fun, but I had no idea how big the party would explode. In 2014 many people remarked how the AT hikers had arrived and were bringing their town-to-town hut party with them. Suddenly in 2014 hikers who had done other long trails were banding together with a superior attitude, and imprinting the culture of other trails onto the PCT. Though I spent 173 days on trail in 2013, in 2014 I heard the words “Yellow Blazing” and “Pink Blazing” for the first time. There were more beards than ever, and there was actual AT gang activity on the trail.

How did you know I was an AT hiker?

Because you told me.

Despite the concerning things I observed as a trail angel in 2014, I obtained a permit from the PCTA to hike this year in earnest. I walked North from Ziggy and The Bear’s on May 15th. The first couple of days I had the trail to myself. There was 1/8″ of snow on the ground and nobody wanted to hike. They slept in at Ziggy’s and some took taxis to Big Bear City.

Leaving from Big Bear City headed north, the sun broke through the clouds and suddenly the trail was choked with dozens of hikers. They hiked and camped in troops. They had illegal fires. They were loud. When I tried to hide tucked in the trees far from the trail, they found me and camped right next to me.

By the time I got to Deep Creek Hot Springs I was already done with the PCT. Deep Creek was no different than it was in 2013, a gorgeous, remote hot spring run over by Los Angeles-area folks wanting mostly just to chill out, get naked, and hallucinate in the woods. Traditionally, the “more serious” hikers have just covered their eyes and walked on through. This year, not only were more “more serious” hikers naked themselves, but they also found that the Deep Creek party had covered many more miles of the trail. 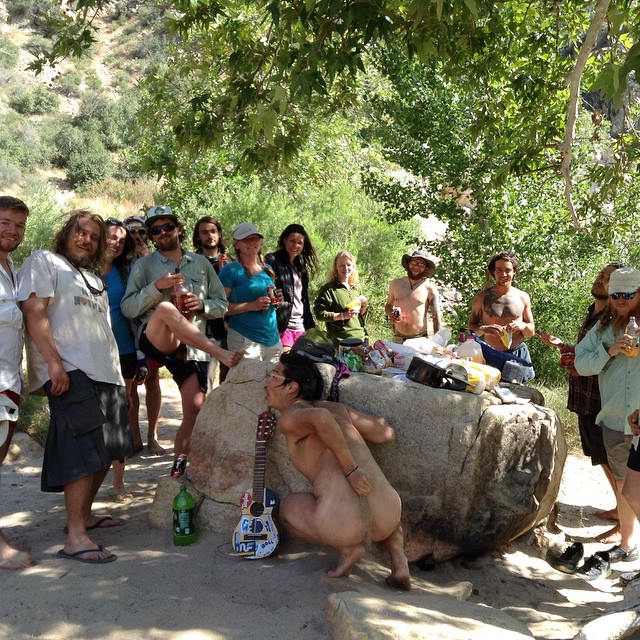 Except in Agua Dulce, where Donna Saufley had closed down Hiker Heaven earlier in 2015. Traditionally a fun place to chill out — sometimes for days — Agua Dulce minus Donna had become a quick, old-fashioned town stop. Now hikers would grab some food at the market or restaurant and continue on to Hippie Daycare, the Anderson’s hiker house 22 miles up the trail from Donna’s. The parties that happen at Hippie Daycare are legendary; I’ve enjoyed a couple of them myself. But maybe the Anderson’s can no longer trust the hikers to respect their property while getting drunk and high. I believe they’ve set up some new rules against drinking. Other trail angels are starting to back down as well, such as Ziggy and the Bear, the Braatens in Belden. I hear that Cascade Locks’ trail angel Shrek is pretty fed up, too. Tom had to close down in Kennedy Meadows due to neighbor complaints. Ravensong may be backing out due to troubles with radio waves from cell towers. These houses exist so that hikers can get shelter, wash up, maybe have a meal with other hikers, retrieve packages, and hike on comfortably. Hikers now seem to think these houses exist to party at, and compare the houses based on how much is offered and how much is done for them.

Meanwhile, new trail angels are popping up left and right, out of the blue. Last year I had a run in with a self-professed trail angel who didn’t pack out trash at Scissor’s Crossing (arguing that since she lived in her van she didn’t know where to bring bags of trash), leading directly to Scissor’s Crossing water cache closing. She seemed unphased by how epically this would affect future hikers. Another trail angel this year left trail magic at the Snow Creek fountain at the foot of Fuller Ridge while he went on vacation with his family. He left behind a laminated note introducing every member of his well-to-do family and their endeavors, as if the hikers cared. Myself and another alumni hiker climbed up by foot and packed it out with three volunteer hikers. It took five of us to hiker out his trash. These efforts are well-intentioned, but I am arguing that they are misplaced and causing trouble on the PCT.

I myself did trail magic in 2014 and though it was fun, I wouldn’t say it was rewarding. I could have been serving at a soup kitchen, instead I was serving things up to kids who really didn’t need it. By making the trail easier for them, I was actually making it less rewarding. By bringing bits of civilization to them, I was robbing them of the opportunity to really live in the woods, to struggle and grow from that. And somehow — and I don’t exactly understand the psychology of it — I was fostering their entitlement.

If enough people cater to your needs and pamper you and tell you how amazing what you are doing is, you start to get a little ego problem.

And there you have it. Entitled people tend to be assholes. There are a lot of assholes on the AT and PCT. In fact, a recent article about the Sierra High Route unabashedly called PCT hikers’ entitlement out:

The trail was full of dirty and entitled northbound Pacific Crest Trail hikers who took every opportunity to inform others along the way that they themselves were the only true thru-hikers — JMT’ers need-not apply.

That entitlement is one good reason to lay off the trail magic and for trail angels to retire (i.e. run for their lives).

If you still want to do trail magic, here is how to do it right, so you are not negatively impacting the trail itself and the culture.

1) Before you go to do trail magic, make sure you aren’t stepping on toes. Doing trail magic at or near another established trail angel’s house is uncool. I saw that happen at Ziggy and The Bear’s this year, where a “trail angel” brought in all sorts of food for the hikers at the house without checking with Ziggy first. The hikers thought this mystery woman was a goddess and she of course loved the attention, and then she left all her detritus and drove away. Several huge, half-empty ice cream buckets to dispose of, and the freezers were already full. W.T.F. (Ziggy is the goddess!)

It wouldn’t hurt to consult with any seasoned trail angel to assess if trail magic is wanted, needed, and if so, how to do it right. Honor those who came before you.

2) Better ideas than bringing food and trash into the woods:

Numbers 1 & 2 foster a cultural exchange in town and limits hiker spoiling to civilized areas and not the woods/trailheads. Never leave unsupervised trail magic in the woods. That’s against the Leave No Trace ethic and often leaves a burden on strangers and animals to clean up after you. Leaving goodies in the woods is just begging hiker vs. animal (bear, rabid raccoon) encounters. You could end up with dead animals on your conscience. Please think about what your food/trash is doing in the woods…

3) Better yet (NEXT LEVEL TRAIL MAGIC)

I’m still struggling breaking up with the PCT.

I love the PCT, but it’s time to see other trails. I’ve been dating the Sierra High Route — totally gorgeous but also totally insane. I keep thinking I won’t go on another date, but then I go out again. Parts of the Sierra High Route merge with the PCT. It tough going back and forth like that. I’m getting mixed signals, for sure. Later this year I have a date with the Lowest to Highest route. I don’t know what to expect…

You’ve probably noticed that I’ve gone 360º here from a crowded trail to a barely-discernable route, but as you’ll soon read there are signs of trouble on these little-known routes, too. It’s not just entitlement we have a problem with but also a lack of education.

More and more people with less and less wilderness experience are out in the woods. You cannot blame or be angry at people who simply don’t know, but still, they are causing damage out there and making wilderness less wild. If I were to impart one more bit of information before signing off, it is this:

* More and more as time goes by I’m considering that the build up of “culture” around backpacking is the problem itself. Because, don’t we backpack to get away from culture?

8 Responses to “How to Do Trail Magic Right”