I was super excited to find this excellent photo gallery of PCT hiker photos over at Outside Online today (thanks Pacific Crest Trail Association for the link). How cool is it that an unwitting trail angel became a documenter of some of the 2014 personalities? I met a few of those hikers (Justin, Blanco, Far Out, Sarah!, Namaste) , and maybe met a few others before they got their trail names, and got teary-eyed looking at their beautiful portraits. But it made me remember that I took some 2014 PCT portraits myself, and still haven’t shared them beyond the ephemeral Instagram base. So here you go:

Hiker Apache. Now I’m partial to this guy because I hiked a few miles with him in 2013, and he’s just sweet and mellow. Here he is back again in 2014 to see how far he gets. I took this picture at Warner Springs. He didn’t anticipate it, but he walked all the way to Canada, most the way with Mary Poppins (see below). They popped out in Canada when I was doing trail magic up there in late September. I helped smuggle them back into America, as neither of them had papers. What a mission! 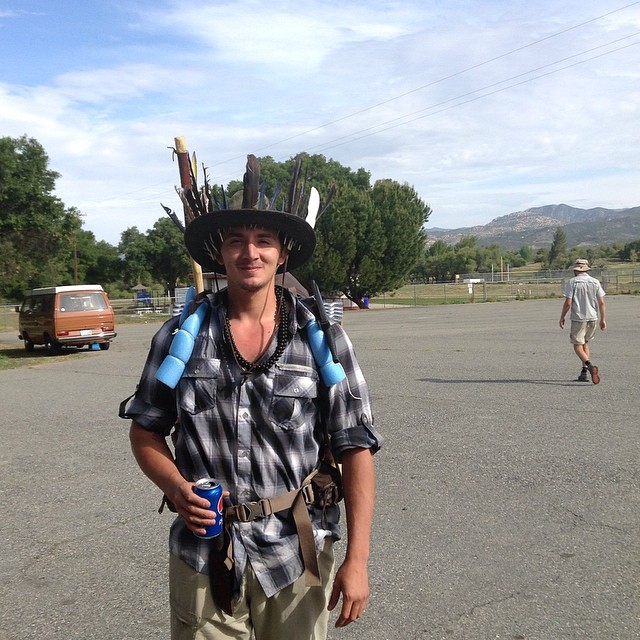 Hiker Gotta Walk at Eagle Rock. This woman was pure, ebullient hiking joy, and a total inspiration, as she just took everything in stride. 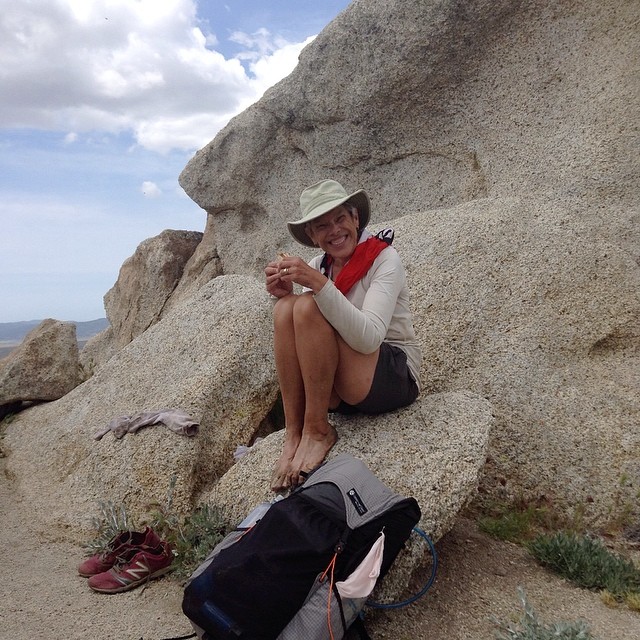 A cheerful and optimistic hiker named Bucky at Scissors Crossing. Scissors Crossing is at serious risk of not being a water cache as it has been for years because of carelessness and vandalism by 2013 hikers. Plan your 2015 hike accordingly! 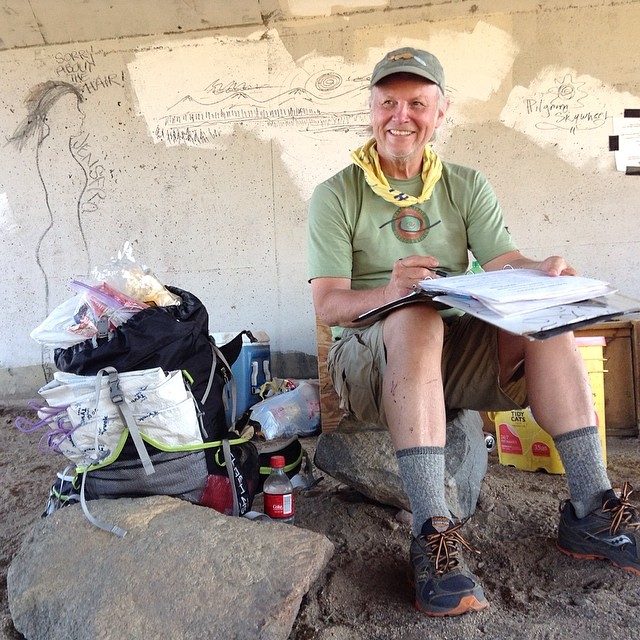 The gorgeous and gentle kid called Pepper Flake hiked the PCT in 2013, hiked with me 109 miles from Warner Springs to kickoff in 2014, and turned around to complete the entire Continental Divide Trail this year. 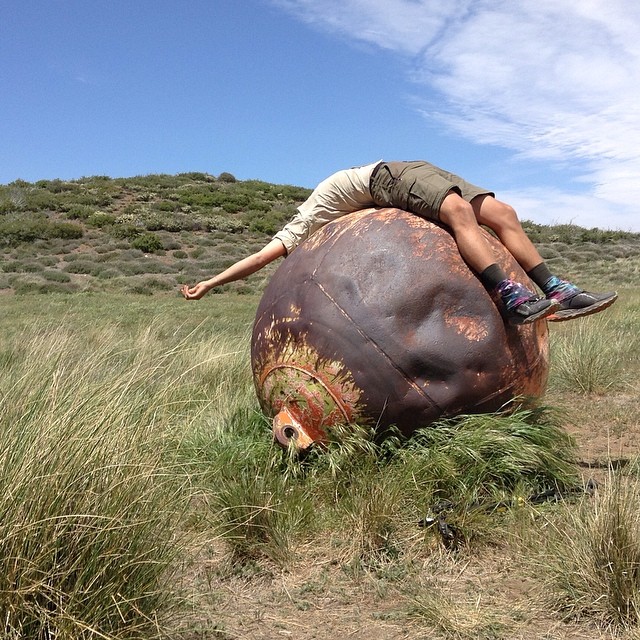 Moonshine rode his bicycle from Tennessee to ADZPCTKO (Annual Day Zero Kick-Off) party in April 2014 at Lake Morena, California, near the Mexican Border, and then hiked most of California. I gave him a bike light at the Anderson’s and then saw him again in Bellingham, Washington in October. Oh, and he hiked the entire PCT in 2013 as well, starting just days after graduating high school. You think you’re an adventurer? 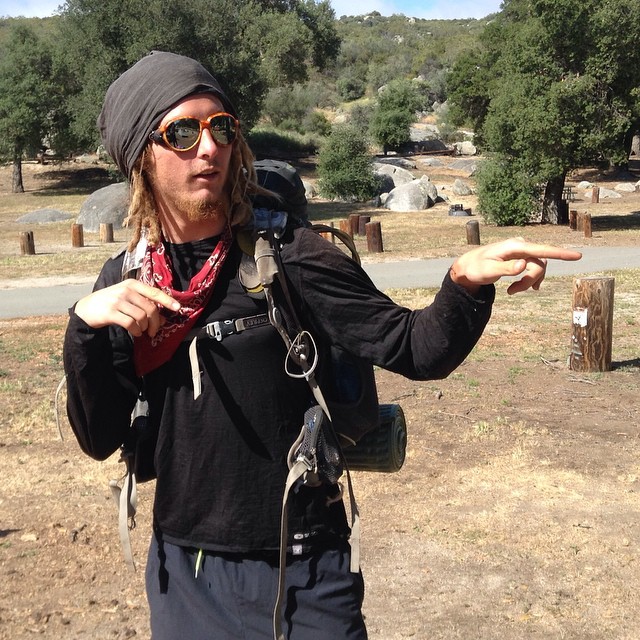 I hiked a few miles with Girly Girl in 2013 so I was delighted to find her at ADZPCTKO. In true Girly Girl fashion she had a resupply bucket with all sorts of girly toiletries. She let me borrow her hair conditioner and straightener and a razor, and had anything else I might need. But don’t get her wrong: she’s an Army veteran and an Arabic interpreter. I ran into her again on the top of Mt. Whitney in June. Pure badass. 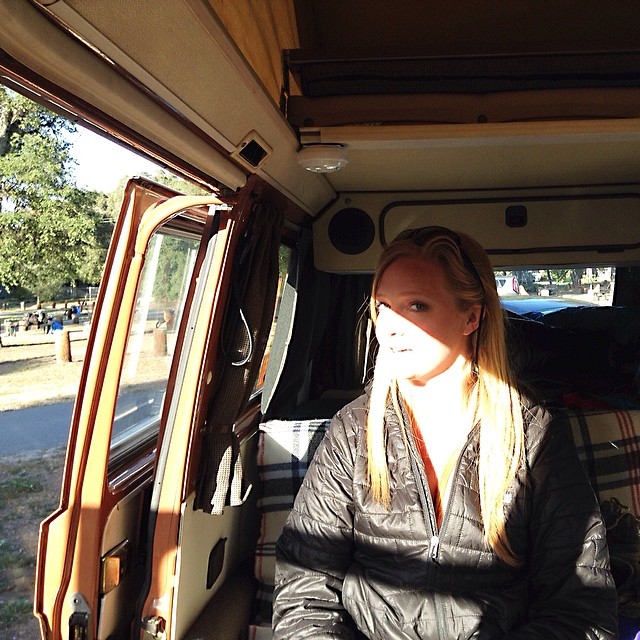 I did a pack shakedown for hiker Richard at Mt. Laguna Sports but wasn’t really able to pry anything from his sentimental clutches. His pack weighed 8 pounds alone. He was having a terrible time on the Pacific Crest Trail. After an honest chat with himself, he quit his hike. 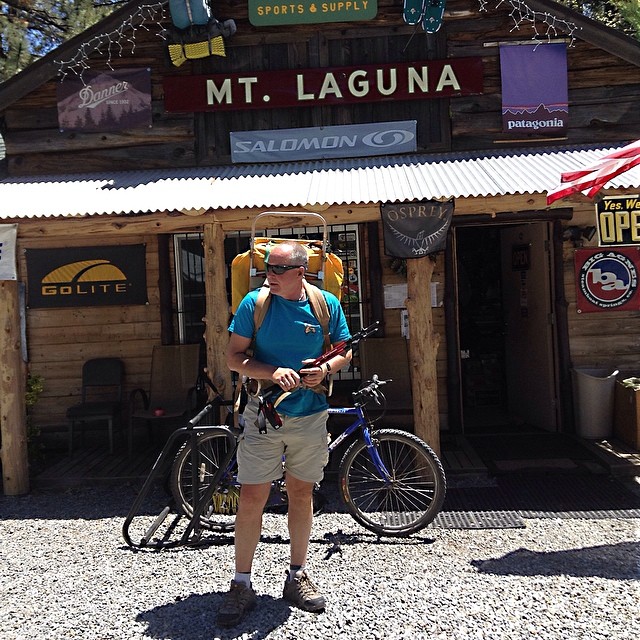 Valentino walked the PCT with his Midnight Rider in 2013 and again in 2014. Valentino is definitely the most well-known and popular horse on the trail! 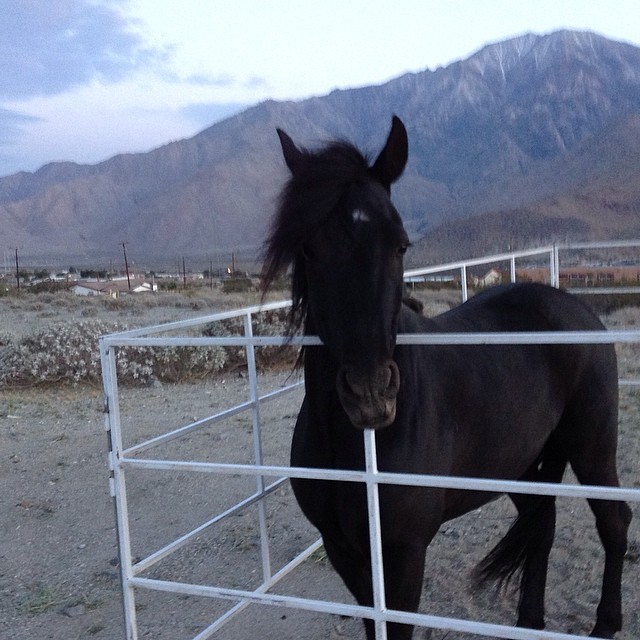 Hiker Doug and I went up to the Fuller Ridge trailhead to pick up Natalia and bring her to urgent care. She took a tumble when she tripped on her hiking poles. She was at first caught up with concerns of scarring and whatnot, but persevered and continued her hike. 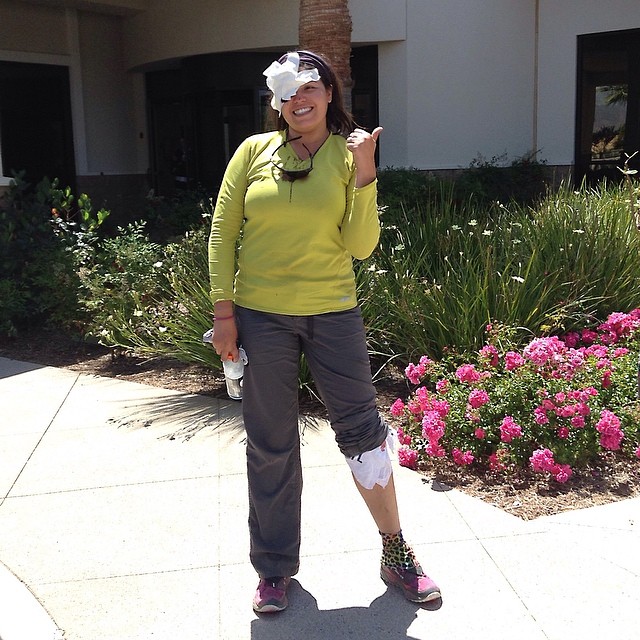 Hippy and Painted Wagon showing off town fashion (the clothes you borrow in town because your pack clothes are filthy hiking wear) at Ziggy and the Bears. Rules are posted in the background. 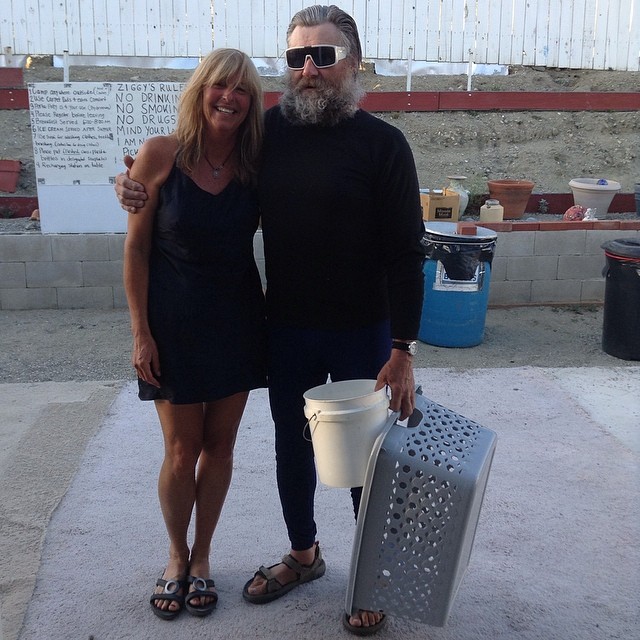 Ziggy and the Bear. They have been trail angels on the PCT for >15 years, and though their home has strict rules, they provide shade, water, mail pickup, and food treats in a difficult place that wouldn’t otherwise suit life. 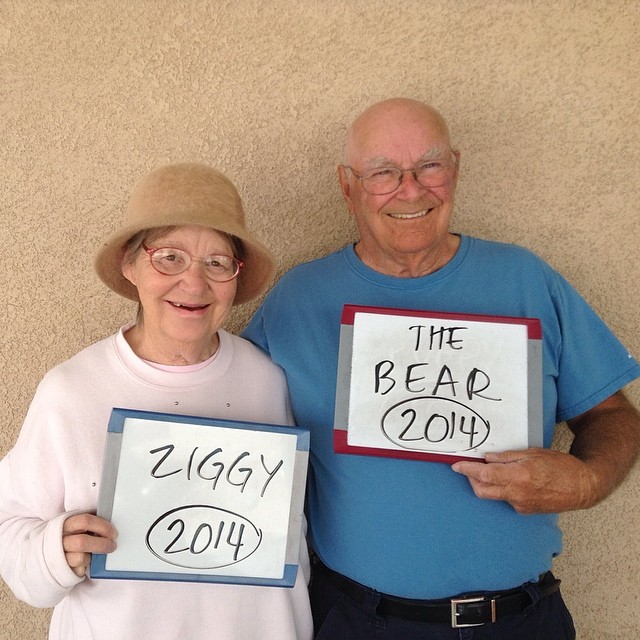 The Grad, wearing “my” (technically the Anderson’s) Hawaiian shirt from 2013, standing in front of the Anderson’s 2014 sign-in sheet in Green Valley, California. Hippy day care! The meta here is that he’s wearing the shirt I wore and had signed by other hikers for about 500 miles after accidentally leaving the Andersons’ wearing it under my jacket in the morning. I mailed it back later. You can still see the pink sharpie stains. 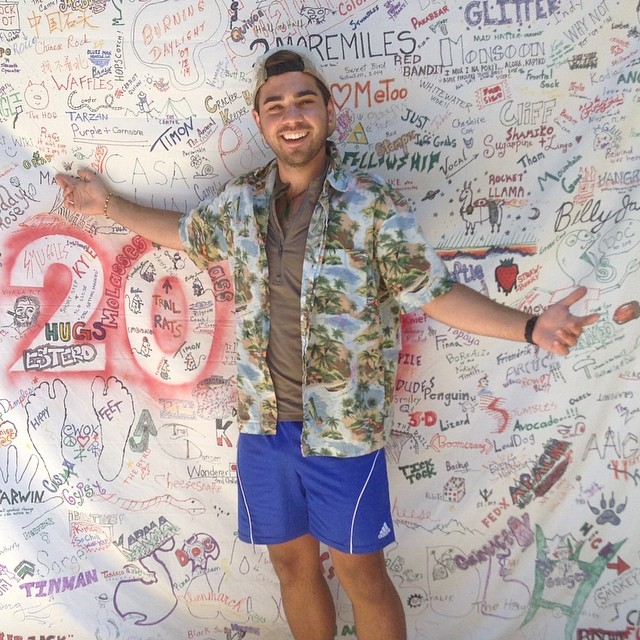 The trail will kick your ass. Here is hiker Grasshopper, a former NFL player and all-around cool dude, headed home with a wound infection on his leg. I put him on the bus in Lone Pine on probably one of the most disappointing days of his life. 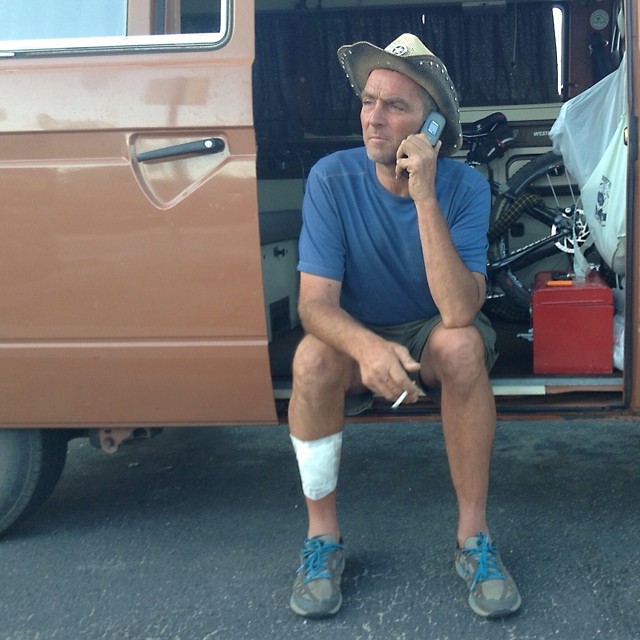 And sometimes the Pacific Crest Trail puts you in the hospital. Here we have hiker Solstice visiting the newly re-named “Black Death” in the hospital in Medford, Oregon. (Bubonic plague was this Australian hiker’s differential diagnosis!) 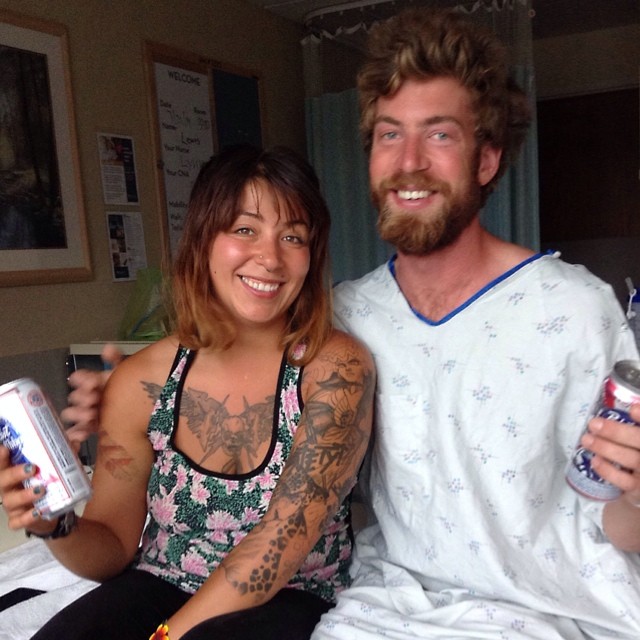 French hiker Wisdom had two impacted wisdom teeth when he arrived at Ziggy and the Bear’s in May. I made him Nutella milkshakes for a week and then shopped a dentist for him to get those darned teeth out. Once out, he recuperated for a week and was back on trail. I was there to greet him with champagne over the Canadian border. His english was much improved (heck, he could talk) and at some point he had shot an automatic weapon. Trip to America a success! 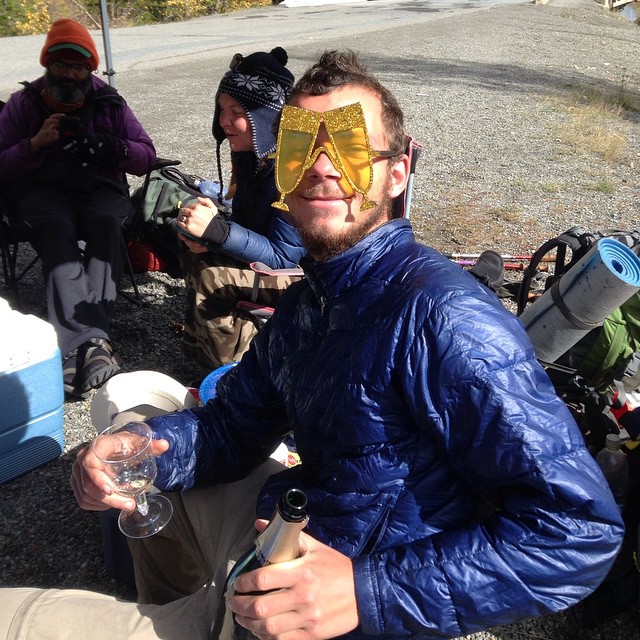 A hyperactive but harmless ginger, Mary Poppins, kisses his sidekick Patricia after crossing into Canada. Now, Mary Poppins definitely wins “Most Likely to… Everything,” PCT 2014. 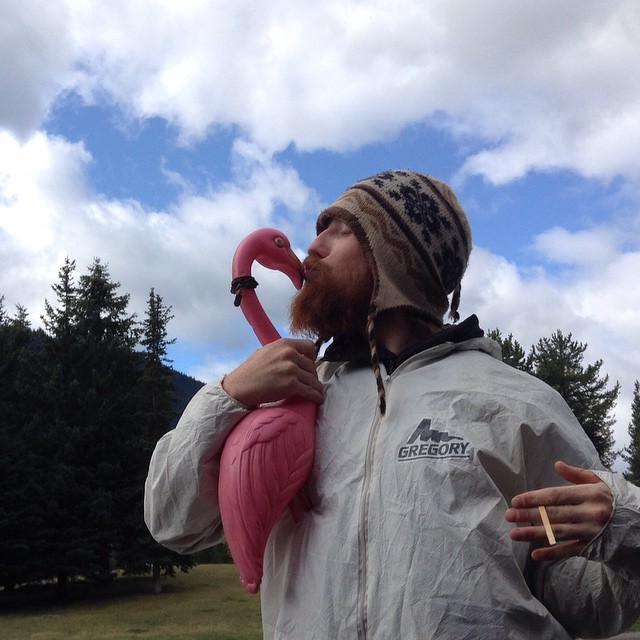 It is very important if you want to hike the Pacific Crest Trail in 2015 or any year after that you donate to the Pacific Crest Trail Association. The PCTA is a non-profit organization that exists to make sure the trail simply exists for future hikers. Beyond that they are constantly navigating and negotiating land rights to keep the trail remote. If you walk it, please donate or volunteer.