When I got my water-cooled 1.9L Vanagon last fall, the prior owner (PO) said repeatedly, ominously, “These vans take a lot of work,” and “I don’t know how long this van will run, could be days, could be years.”

As I drove it down to Mexico and back this Spring, I suffered so much anxiety over every noise and flashing light. And yet, despite some minor problems (like the wheel coming off after exiting I-10 East of Los Angeles and ill-timed bouts of heat soak), Chief Pete somehow made it back to Portland after a LOT of driving and good times. 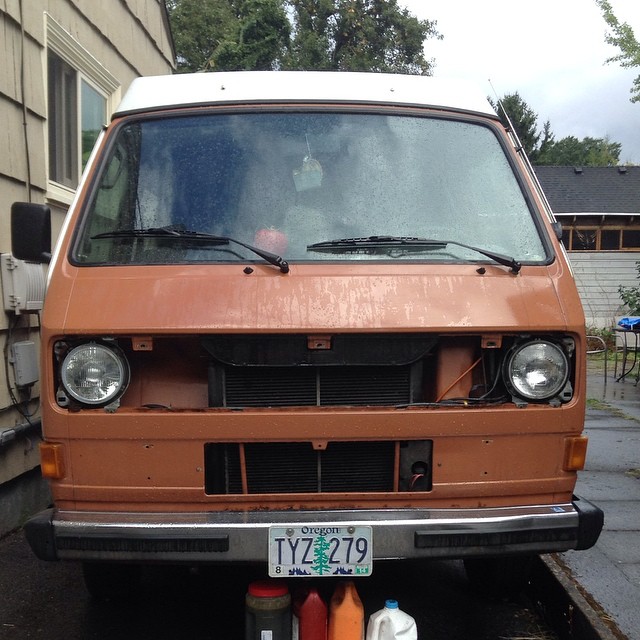 I won’t even go into how badly he failed. Really bad. Bad Chief Pete!

Thus began my month-long repair project, encompassing two new cylinder heads and push rod tubes, a new oil pump, new water pump, refurbished fuel injectors, many new seals and gaskets, much new stainless steel hardware, and a new catalytic converter. I got the heads and tubes in trade (I’ll go more into that later) so this project cost me under $1000 to complete. Stainless hardware isn’t cheap! Haha, no really… So many people have asked me to value the time I put into the project. Trust me, I know. Also, the mental anguish isn’t covered. But how better to learn about something than to take something apart, assess it, rehab it, and put it back together? I now know almost every single nook of my engine bay, I know what nearly everything is and what it does, and feel much, much more confident driving into unknown territories.

Here were some of my tribulations: 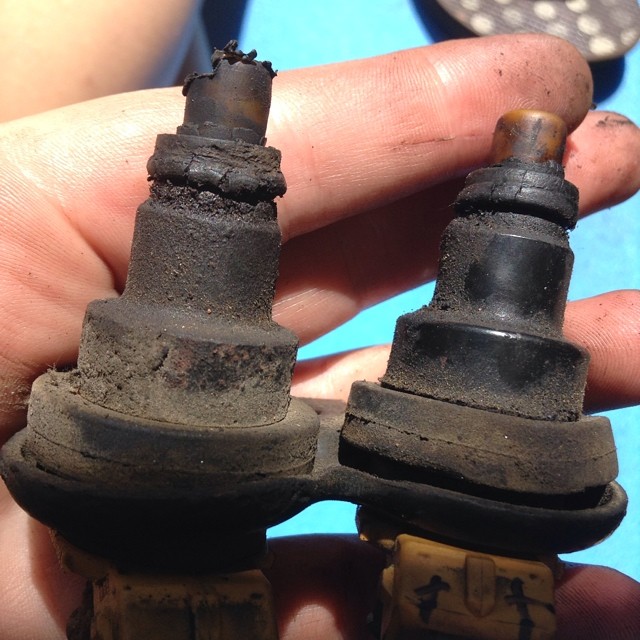 Could be part of the problem. Ya think?

The fuel injectors. Yikes! I shipped these off to Mr. Injector in Coeur d’Alene Idaho and these came back with a perfect flow report, looking like new. Mr. Injector even sent me some Jolly Rancher candies with my injectors. Who has customer service like that anymore? 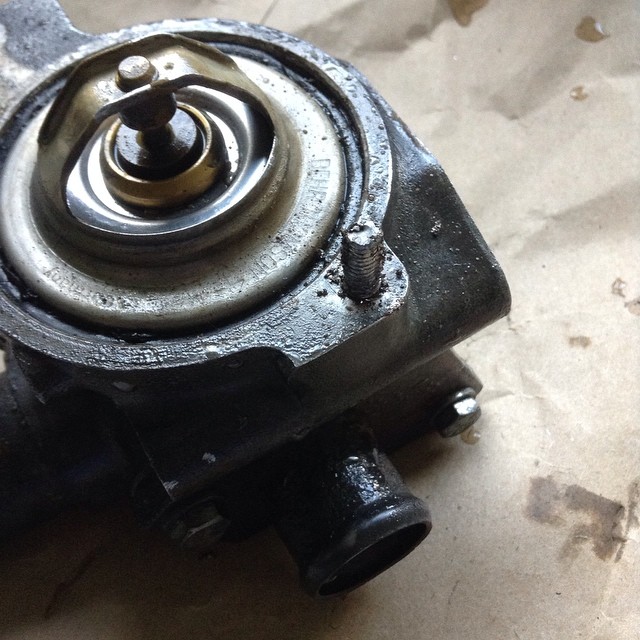 Everything’s going sorta okay, and then a bolt breaks off in my van’s thermostat housing. I’ve been cloying it with lots of lube and vice grips… but it’s looking like I’ll need to drill it out. How the heck did it get so stuck?!?! Little obstacles, but Chief Pete should be running again really soon!

A bolt broke off in the thermostat housing while removing it from the water pump. Then my friends at the hardware store annihilated it with a drill. So I set about getting a new one, and the new-used one arrived with TWO bolts broken off inside it. Ha! I can’t win! So I took the “new one” to Gilbertson Machine Shop in SE Portland and Lonnie himself did some snappy welding and bead-blasting in order to hand me back a beautiful (yet pitted with some corrosion) ready-to-go housing. He also helped me with my other problem which was a difficulty removing my old oil pump: 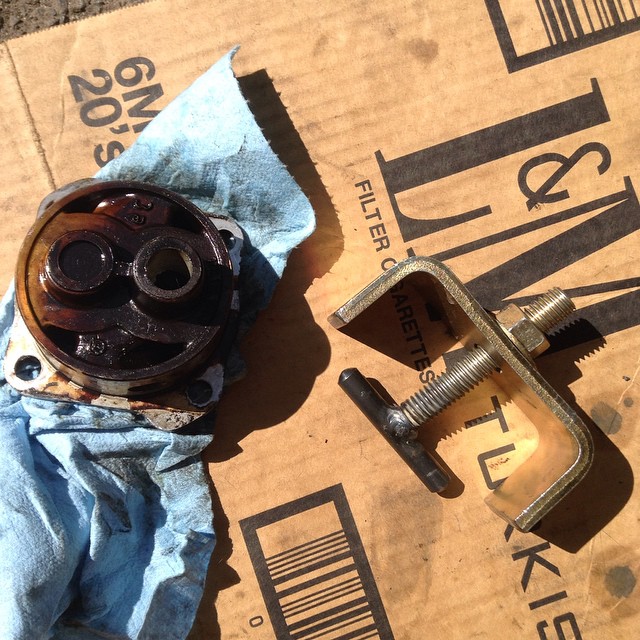 Vanagon oil pump is out! Fourth tool’s a charm. Now it’s super customized with a sturdier tee and less depth. Here’s to never giving up (and credit cards). Thanks again, Lonnie!

Lonnie made me a customized pump puller tool from the stock $10 tool, and mine actually works. Even with the crank pulley on, this sits appropriately (vertically) on the engine block and can take the torque necessary to pop out a pump.

These troubles out of the way, I thought I was home free, but then no! The front exhaust cross over pipe did not want to fit on, which made me paranoid a cylinder head wasn’t seated. Paranoia really sucks. I removed a head that I had just finished mounting (!?), finding nothing wrong with the mount. But I *did* find something major that I had missed: 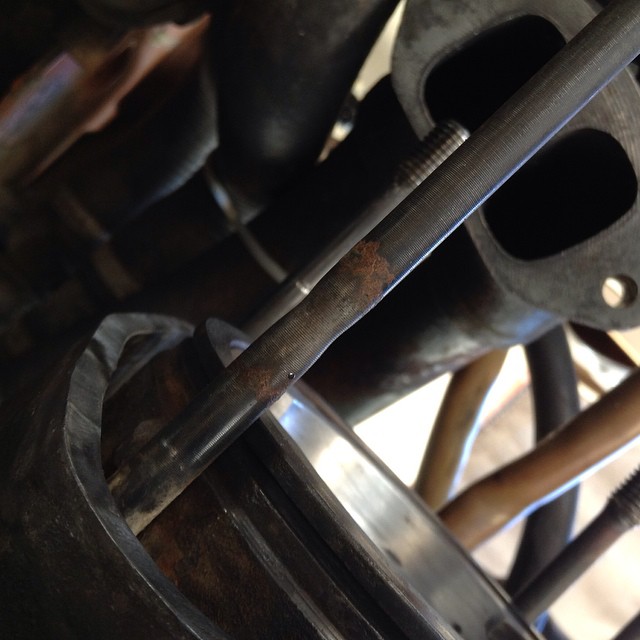 There could be evil lurking in your engine, just as it is in mine. One more case for NEVER DOING ENGINE WORK MYSELF EVER AGAIN. (This picture is of a Vanagon cylinder head stud that went on a… diet)

Yikes! A corroded (not stretched, this one had the same measurements as the new one) cylinder head stud! I brought this over to Halsey Automotive where I chatted with Tom about the predicament. He and two of his mechanics looked at me gravely and I almost cried, because I knew just how serious this was. Break the stud while trying to remove it, and I might as well scrap the engine block. Tom said the last time he tried getting one out, he ended up in the hospital with metal in his eye. Needless to say I left Halsey Automotive with my new $30 stud feeling hopeless. I spent the next four days patiently dousing the stud with PB Blaster. I unloaded an entire can of CRC Freeze-Off on the stud and I think I can say that stuff is useless. What ended up working was

Now this is going to sound super dorky but I’ve been approaching mechanics with physics in mind. Granted, I think the last time I took a physics course was in the 1990s, but still — great concepts! All the other problems in this blog post were fixed with physics, so here is how I went about the stud problem. Heat the stud about 25 seconds about an inch from the cylinder sleeve until glowing red, then wait about five minutes for the heat to move to the case. Take that time to fill a glass bottle with water and ice (it will have to be a wide mouth bottle with a fluted neck). Return to van and stick the end of the rod in the bottle. It will cool the rod. Cool rod, warm case. Attack the rod again with some PB Blaster, tap or wiggle or strum it to maybe move more PB into the threads, and then try to turn it. Mine turned clockwise first, with a terrible snapping sound. I was sad to move it the “wrong way,” but happy that any corrosion bond had been broken. It literally took me four days of gently trying to turn this stud, but then finally after using the hot/cold method a couple times, it started turning out. I had to pull the cylinder sleeve out a little more than an inch to remove the stud, but out it came! 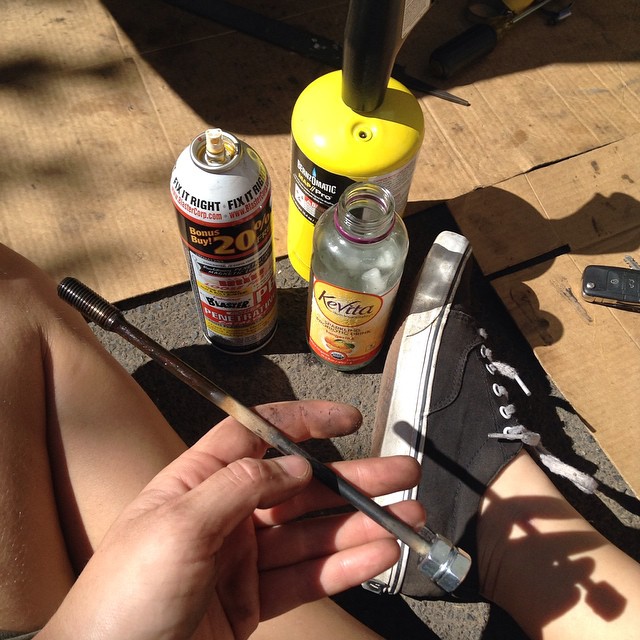 Celebrating huge huge victory over this asshole of a cylinder head stud! Me and my main tools after five days of trying.

And then Pete went back together without incident. Happily ever after. But will he pass DEQ? STAY TUNED.

I owe major thanks to the people mentioned above but especially to Alexis for letting me park in her driveway. When I was black with grease and needed to use her bathroom, and when two weeks turned into four she didn’t even blink, and I love her for that. My mother and best friend Pete also provided much-needed emotional support. Also, I got a lot of help from Ken Wilford of vanagain.com – he reassured me with quick replies to my emails. Thank you to PCT hiker Mr. Green for distracting me from stuck van parts with a rigorous 42-hour, 44-mile hike around Mt. Hood. And to my followers on Twitter and Instagram cheered me on and gave good advice.

One Response to “Chief Pete Comeback”

Cool, me too! It’s how Little Package Cycling Caps came to be. I’m not sewing caps right now, but I bet you could make your new favorite cap — yourself!

Keep in mind the holidays are coming up. Homemade cycling caps make fantastic gifts for cyclists!