I skipped the ADZPCTKO PCT Kick Off party the year of my hike. I watched dozens and dozens of hikers get carted south from Warner Springs, but I chose to keep walking north.

But I certainly would not miss the opportunity to reunite with my fellow 2013 hikers at the 2014 Kick Off. I’ve heard from so many people that going the year after you hike is the most fun, because it’s like a big reunion, and you’ll know more people. I got in touch with a bunch of my 2013 PCT friends and found out that some of them would also be able to hike to Kick Off, and so it began – a reunion hike to Kick Off! This was a blast. My photos show what it’s like to southbound that section, and a little bit of trail culture, including hiker trash stuff, hitch hiking insanity, and some fresh 2014 hikers.

First things first, we had to stop at Eagle Rock for a while. Just a few miles into our trip, and we already were lollygagging, but it felt so good. So chill. And I’d never seen Eagle Rock before! It’s quite cool. In 2013, I walked right by it because I was under the impression that it was a ways off trail and I couldn’t tell from descriptions what exactly it was or if it was worth the detour. It’s worth the detour. 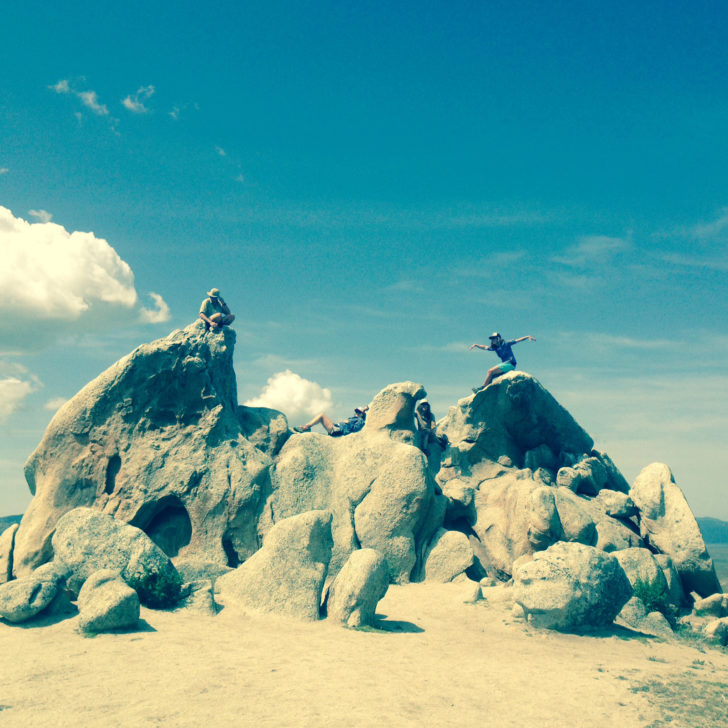 The crew at Eagle Rock. L-R: Pepper Flake, Shotput, Me, and Hot Tub 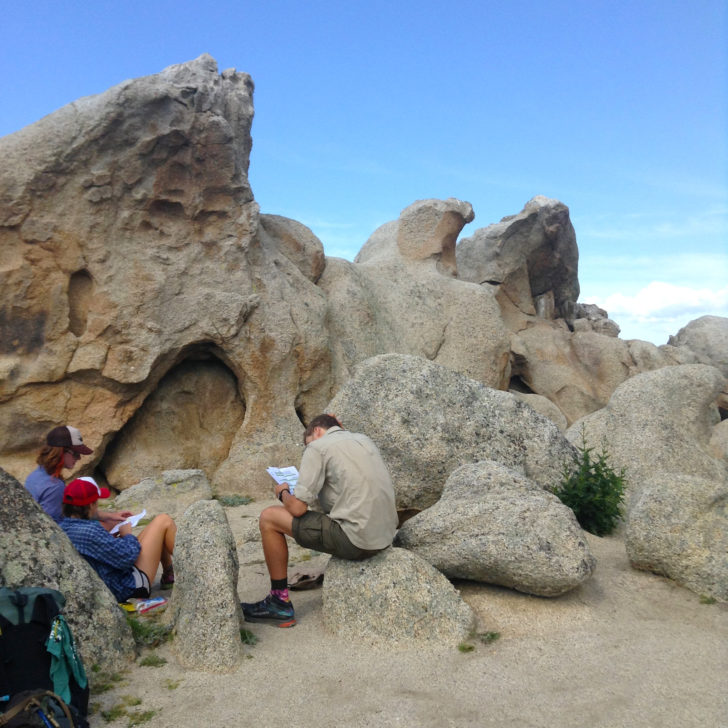 And of course I had to stop and have my photo taken at Billy Goat’s cave. In 2013, I was caught in a rainstorm north of Scissor’s Crossing that picked up as the sun went down. Since I didn’t have a shelter (DUH), I thought I’d aim for the cave. As I approached, I kept imagining it packed with drippy hikers, and “Erm, excuse me, but could I pack in with you,” scenarios addled me, but when I found it it was EMPTY! I was shocked! It was warm inside with a dry sandy bed, and just the right size to sleep one. I just had to deal with mice chewing at my OpSac all night. But I’ll never forget how that cave saved my ass. I’ve chatted with Billy Goat about it and he can’t understand either why more people don’t use it. 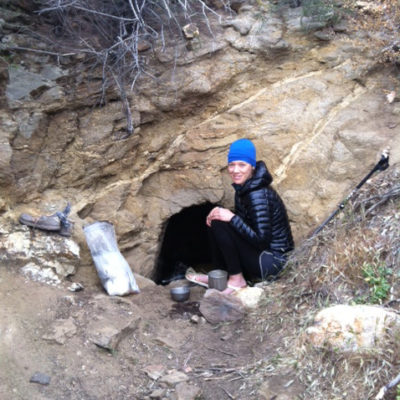 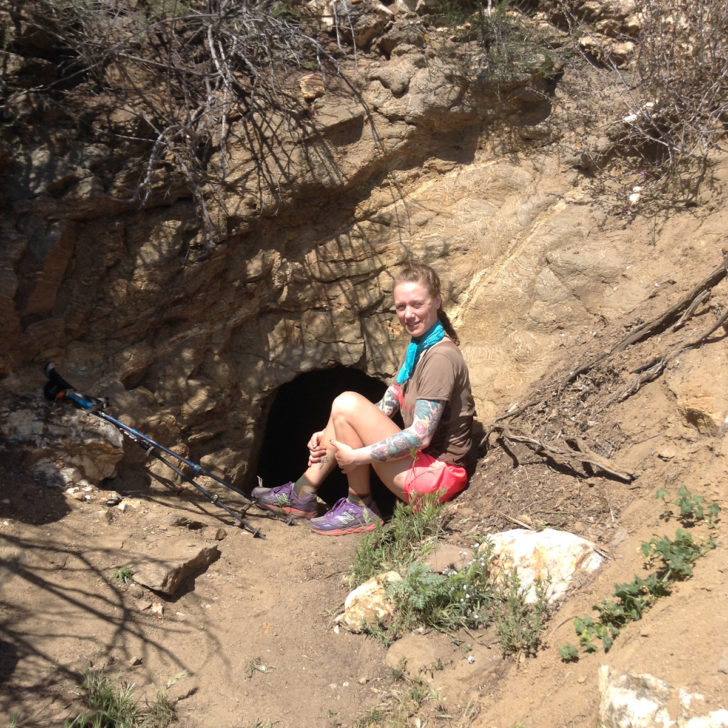 We played Bocce Ball after arriving at Barrel Springs then found ourselves too tired to even tuck into the 6 liters of wine we were carrying. Whispers showed up headed north. We all knew him from 2013 so it was cool to see him — hiking the entire trail again! We all set up cowboy camps under a tree, shared our rations, and laughed ourselves to sleep.

This was a quick section for us. I was really happy and proud to pull off a 22-mile day nearly all the way down to Scissors, out of Barrel Springs. I felt like I still “had it.” 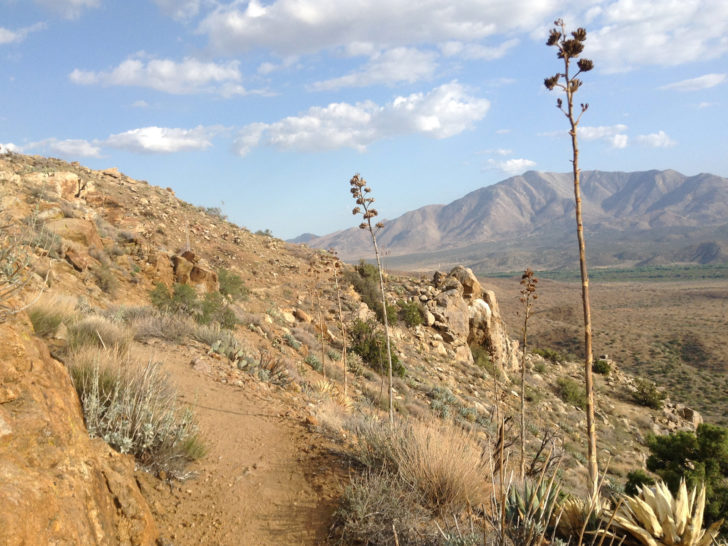 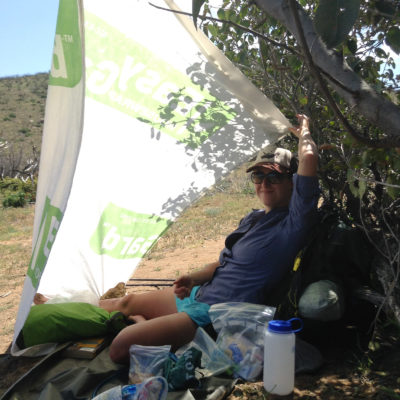 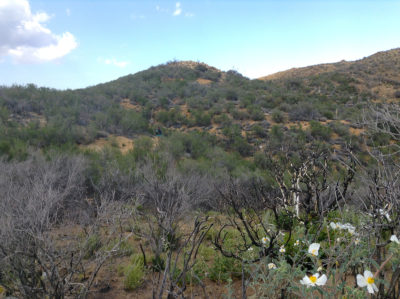 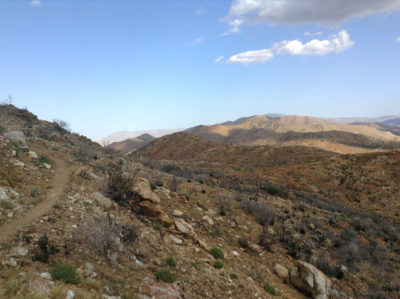 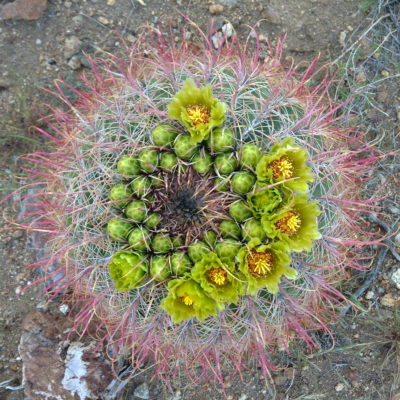 Cacti north of Scissors Crossing are more diverse and colorful. 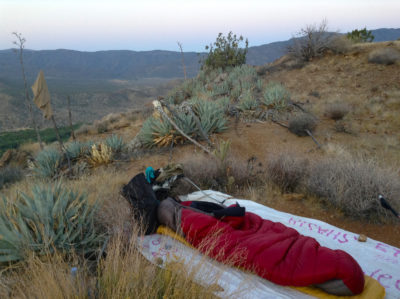 After a 22-mile day, I ducked off the trail, and found this eagle's nest above Valle de San Felipe. 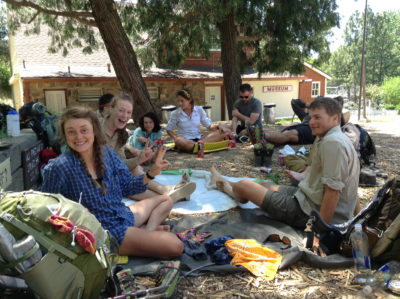 We enjoyed sitting around with 2014 hikers in Julian - some of them already had trail names, like Handstand. 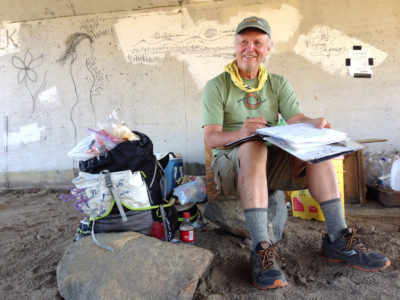 Bucky was cooling off at Scissors crossing. He's hiked parts of the PCT many times. 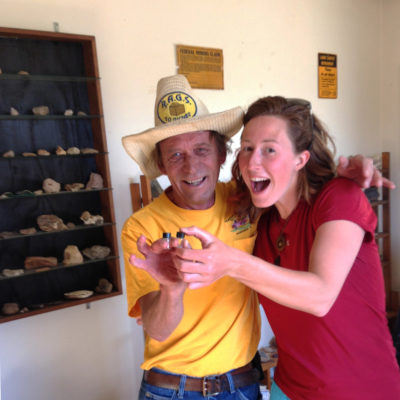 Letting a hitch take you home. What's the worst that could happen? He gave us gold.

This was a very big climb so we timed it for the evening. One big push and we were up… but by then it was quite dark. I ended up with a very lame campsite just yards away from Rodriguez Spur without realizing it. Too tired to care. 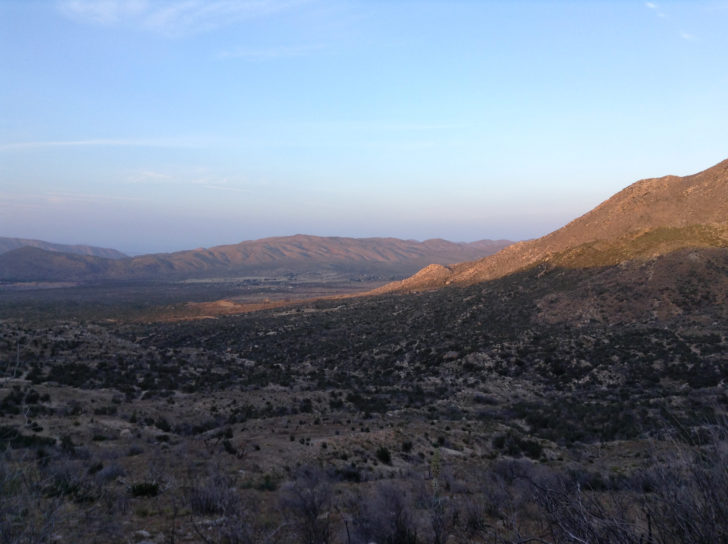 Sunset on the San Felipe Valley looking north while headed to Rodriguez Spur. 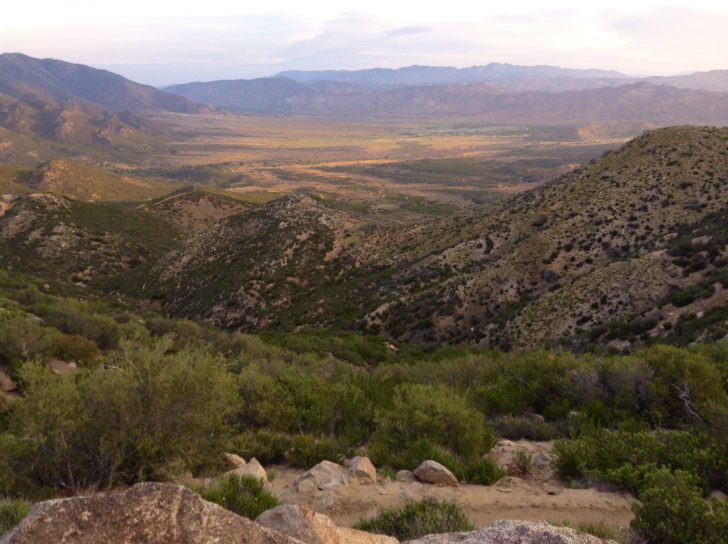 The views headed down toward Scissors Crossing were impossibly gorgeous. 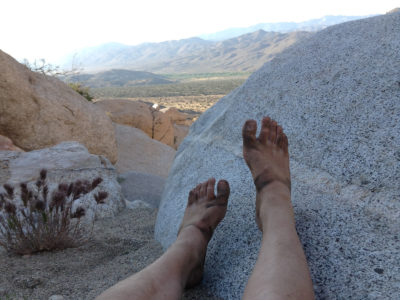 Headed up the side of Granite Mountain after a day spent in Julian. Dirty feet from hiking in sandals 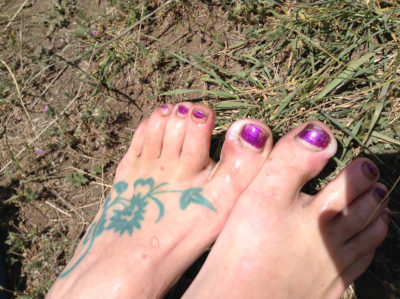 Hot Tub was suffering some blisters. 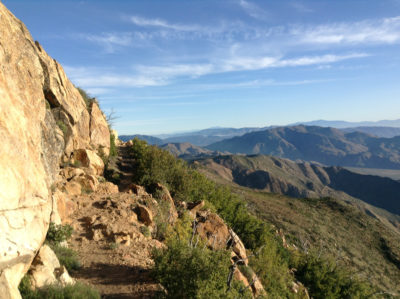 Some nice tread cut into the face of a cliff on the PCT in the Anza-Borrego Desert State Park. Such a beautiful area, but can get very, very windy! 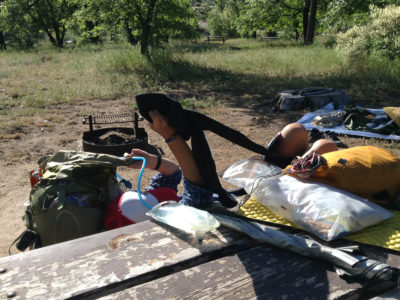 Not sure what Shot Put was doing here, but I'm pretty sure it was hiker trash-y. 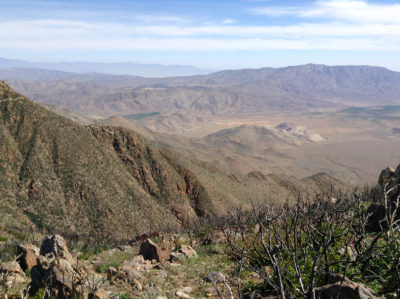 Views down into Vallecito Valley north of Mount Laguna are the first truly expansive, breathtaking views on the PCT heading north. 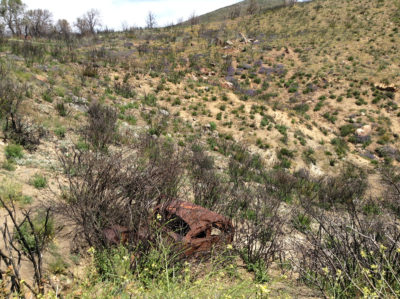 Looks like a long time ago, a car rolled off the Sunrise Highway... 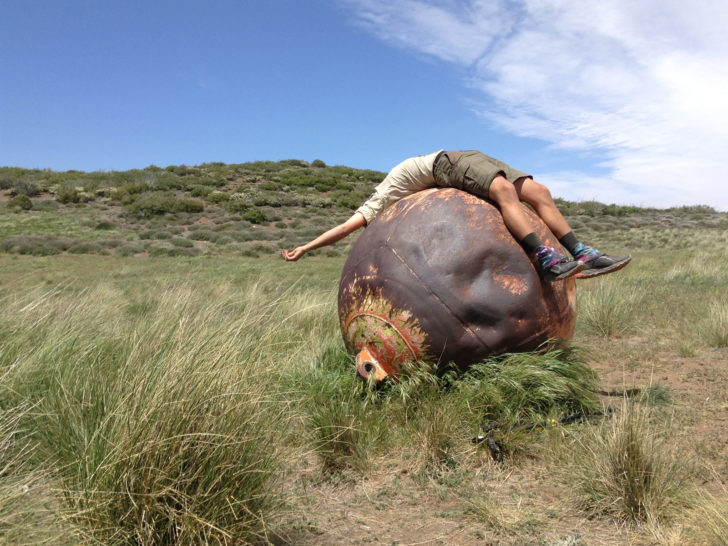 Pepper Flake stretches out his back at Sunrise Trailhead trough – this big wrecking ball was apparently used with another one and a long chain to take out swaths of brush. Roll the contraption down a hill and… no more trees or brush!

One thing I think a lot of people don’t realize about these first 100 miles of the PCT — thinking they’ll be hiking through blazing heat in white sand deserts — is that it’s very cold at night. This area can also have dramatic weather well into May, including snow storms above 4000-5000 feet! So many Pacific Crest Trail hikers arrive at the southern terminus quite unprepared for what they might encounter. They have spent an awful lot of time worrying about water sources and dehydration, but not much time considering that the temps could drop well below freezing every night.

…Which is why Dave’s gear shop at mile 42 in Mount Laguna is pretty much SWAMPED with hikers, March through May. We dropped in on Dave and he graciously took us to his amazing cabin home for the night, where we got a walking tour of the area and had a nice dinner. At this time I mentioned I might be available to help him with his Spring rush and that’s how I ended up working at Mount Laguna Sports!

Another thing people don’t realize is that they shouldn’t camp in hiker-made campsites right along the trail. This contributes to trail widening, erosion, and overuse problems. Eventually trail crew workers have to come in and rehabilitate these sites. It’s not only really important to camp off trail, but it’s also really rewarding and fun to go off trail and explore/hunt for a cool site. You don’t have to camp where Half Mile and Guthook maps suggest, in fact, you shouldn’t! Explore! Just be careful to not trample vegetation, and put things back the way you found them before leaving. That’s my LNT rant for today. 😉

Another exciting thing fresh PCT hikers don’t think about much is they are sharing the area with many hidden “illegal” immigrants from Mexico. So, there are frequent Border Patrol missions, and these days if a hiker doesn’t have some sort of run-in with them, they’re an outlier. Several people I have talked to have seen “illegals” running bush-to-bush, but I’ve spent a lot of time in this area and haven’t seen anything but police vans, drones, and helicopters. 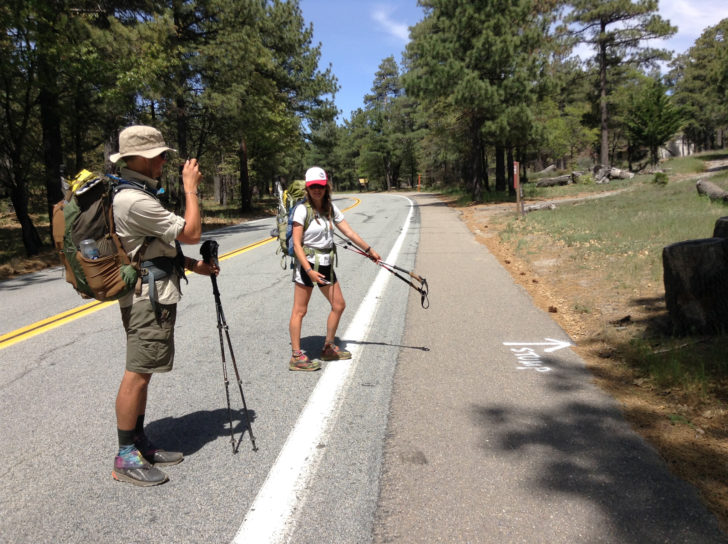 Shot Put points out the obvious being pointed out. 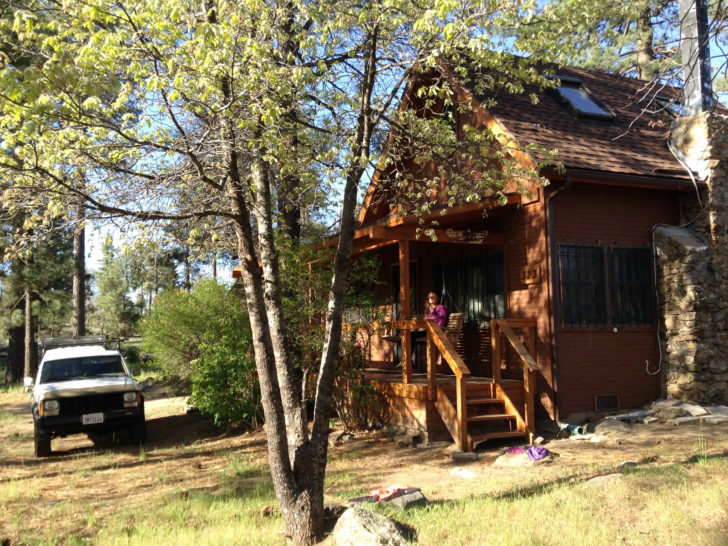 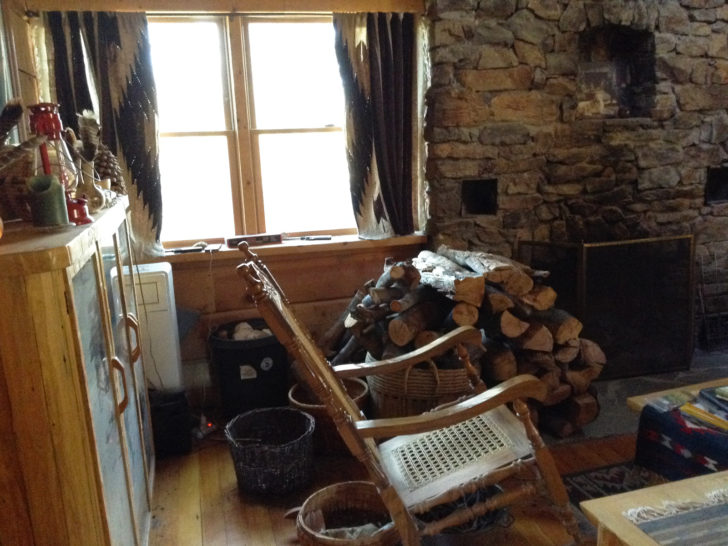 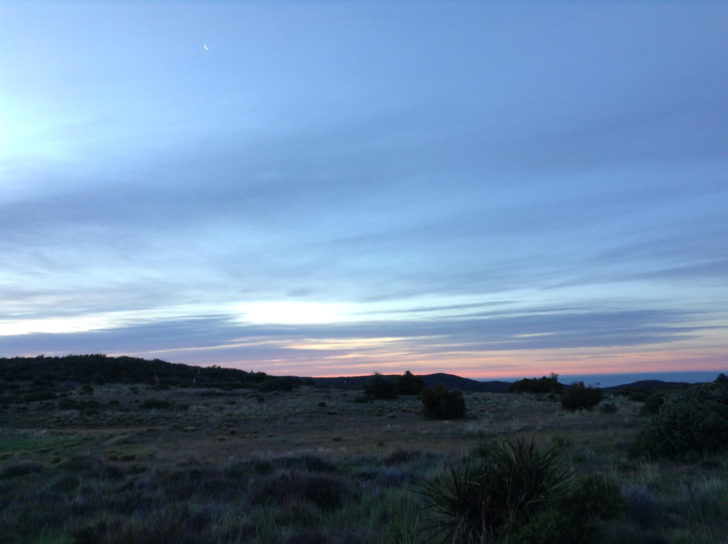 About 5 days of walking later, we arrived at Kick Off. We dispersed pretty quickly upon arriving because we were so excited to see all our friends. There were so many of us 2013 hikers there, and so much food and alcohol and other high jinx, that it was just a total riot the whole time. I was pretty lucky to have my van there because the weather got really shitty — many of the class of 2014 hikers certainly had a rough go of their first week on trail! 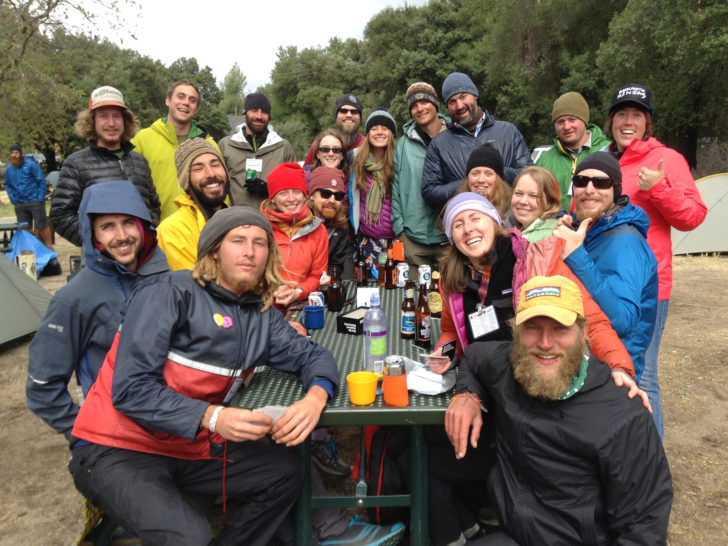 PCT 2013 alumni after some competitive runs of Cards Against Humanity 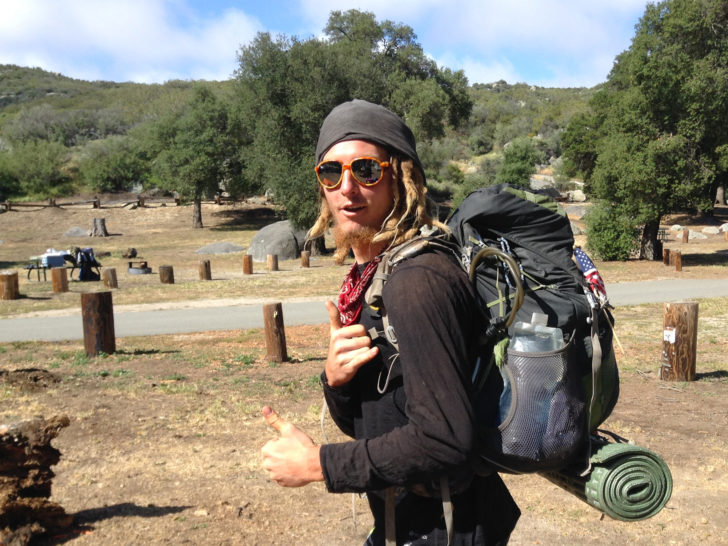 Moonshine rode his bike to Kick Off from Tennessee then hiked the entire PCT. 2 years in a row. No big deal. 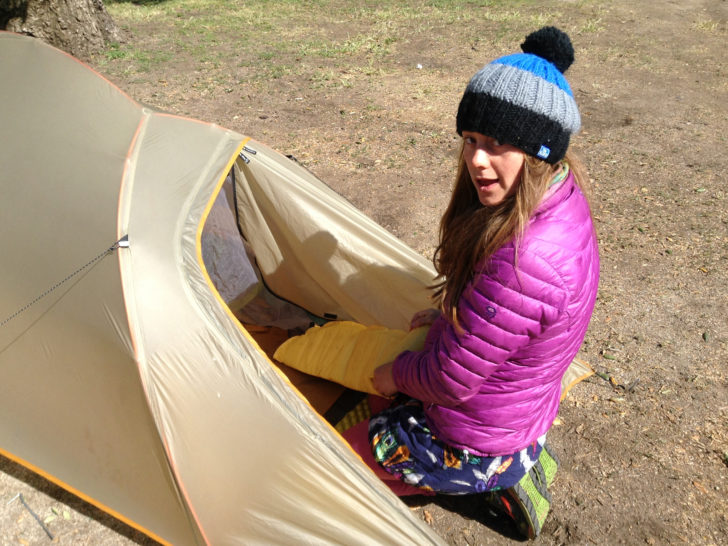 Shotput shows the 2014 hikers how it is done. That night most tents were blown down in a storm. 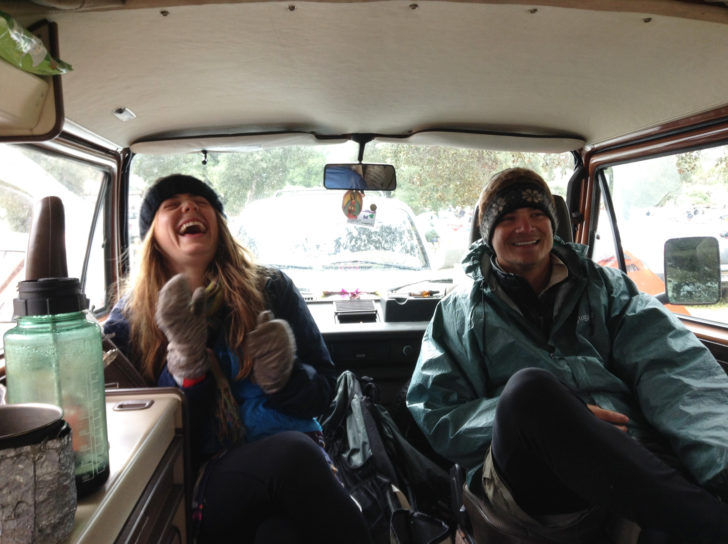