I don’t know why I have been postponing writing this. I suppose it is because I am tired. But as tired as I must be, I feel ashamed to admit being tired because I have managed to postpone being tired for six months. I’ve walked about 18 miles a day, almost every day for 173 days, to complete a 2660-mile long hike. It must be okay to be tired now, it really must, but before I collapse in exhaustion I gotta let you know that…

When we left out of Winthrop in Northern Washington state on October 3rd, there was a joke going amongst our four-person snow squad where almost every discussion ended with, “Why bother? We’re not going to make it to Canada anyway.” “You forgot your US re-entry papers? Not an issue seeing as how you’re not getting to Canada anyway.” “Those snowshoes don’t make your butt look big, but they also won’t make you float on snow, so you might as well quit. You’re not going to make it to Canada.” And on and on… Reverse psychology or psych out?

It didn’t matter. Within a few hours of embarking on the PCT at mile 2600, it was pretty obvious that we were well-equipped and that the weather was cooperating. Wait – we were going to make it to Canada? Now what? 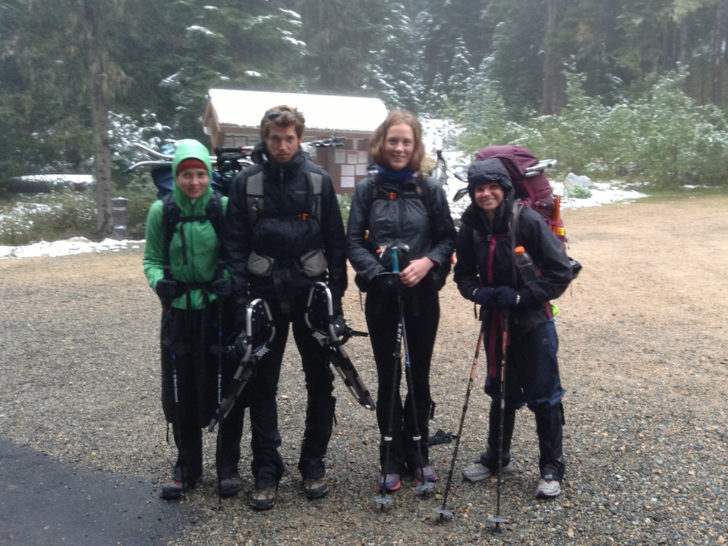 Taken 8am on October 3rd. From left: Bad Seed, El Jefe (who is smiling because he’s going to make it to Canada), me (Puppy), and Cherub.

Nothing was as bad as we had been led to believe. There was no ranger at either Rainy Pass nor Harts Pass trailhead to stop us*, no new precipitation was falling, the skies were blue, the snow was packed with only a few inches of post-holing most the way, the trail was perfectly visible, and there was no mythical “wall of snow.” Our packs weighed about a ton each, but at least we were cozy warm and over-fed. I might go so far as to say, “It was fun.”

I was especially impressed with miss Cherub, the South African hiker, for passing what was for her a crash course in “snow” with flying colors. She went from never having seen snow before her PCT hike, to trudging through powder, sloshing through slush, tip-toeing on ice, making snow balls and ice forts, and even camping in the stuff. 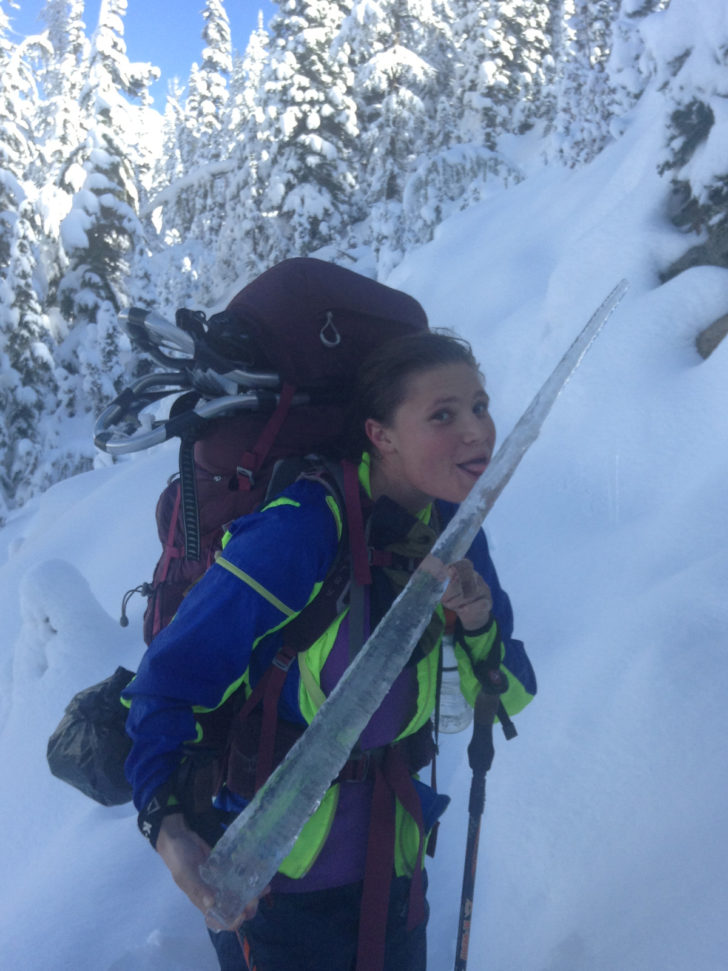 Cherub at 10am on October 3rd, with her first icicle. 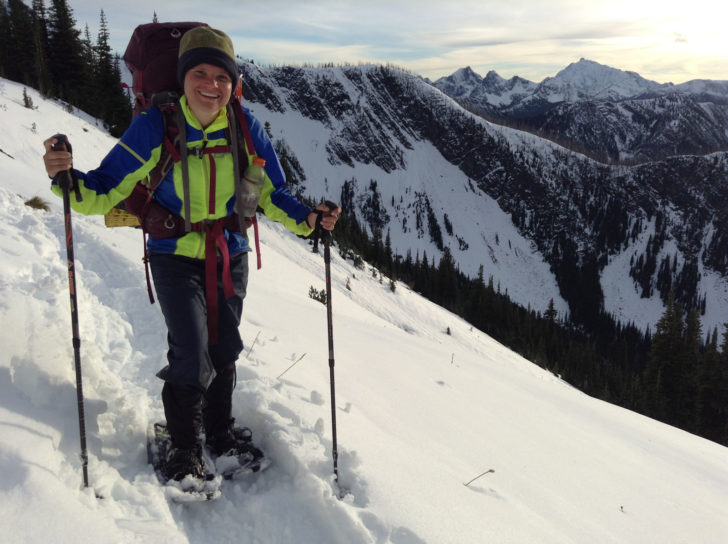 5:30pm on October 5th, Cherub getting around on snowshoes. 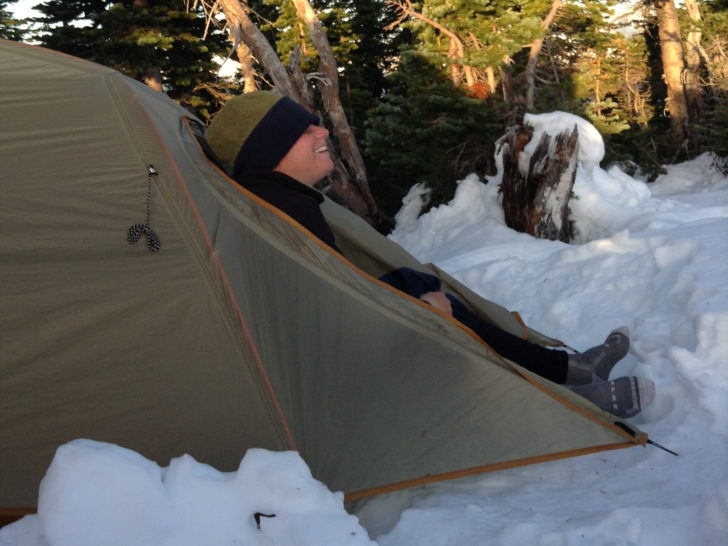 7:35am on October 6th. Waking up in a snow field, and practically a PCT Finisher!

Well, it wasn’t all fun. For me, it was a little tough ending my hike in a group. I had hiked most the previous 2600 miles solo, camping alone almost every night. But I abandoned my solo hike routine for the last four days, grouping up for safety as many people had advised. When the going got tough going through washout after washout after Rock Pass (these washouts are notorious), and my group didn’t act as a group, my terror turned into terrifying crankiness and then, after another couple miles of trailblazing through shin-deep (and sometimes thigh-deep) snow and snail-pace snowshoeing, point-of-no-return exhaustion ridiculousness. On a ridge, 9 miles from the border, with the sun setting on what was possibly the most beautiful scene on Earth that day, I whimpered and choked back a few sobs. I was cooked. THIS was almost TOO hard. In those moments, when I had clearly lost my mind, I voiced to myself that that ONE day was more difficult — physically and emotionally — than laying around with a broken collarbone for four weeks (which is exactly what I did in August 2012). I was not sure anyone had ever burned more calories than I had that day. I was almost done with the PCT, and still, mile by mile, the PCT was ramping it up and throwing all it had at me. More and more difficult, more and more beautiful. Was this even possible? 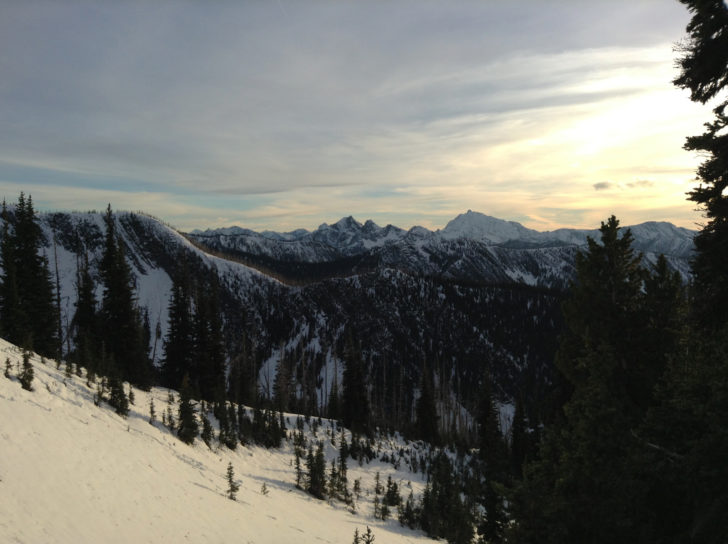 5:54pm on October 5th. Taunting views of Canada after getting over Woody Pass. 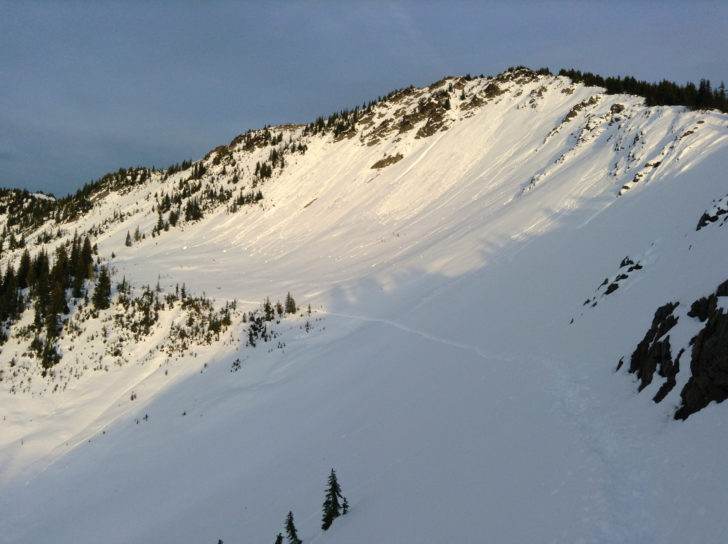 That night I stopped near the last highest point on the PCT, and snow camped. Cherub joined me and we had the most satisfyingly epic night on the trail — as our last night. She is a hiker who I really loved sharing the trail with, and so it was an honor to share my finish with her, non-solo, at the monument. I did pull ahead the next morning so as to have a few moments alone at the border, but I mostly just spent it in shock, staring at the monument and fussing about mindlessly. I ended up drinking a lot of bourbon and taking a nap. What is one supposed to do when completing such a long journey, such an epic task? (I’m still wondering.) 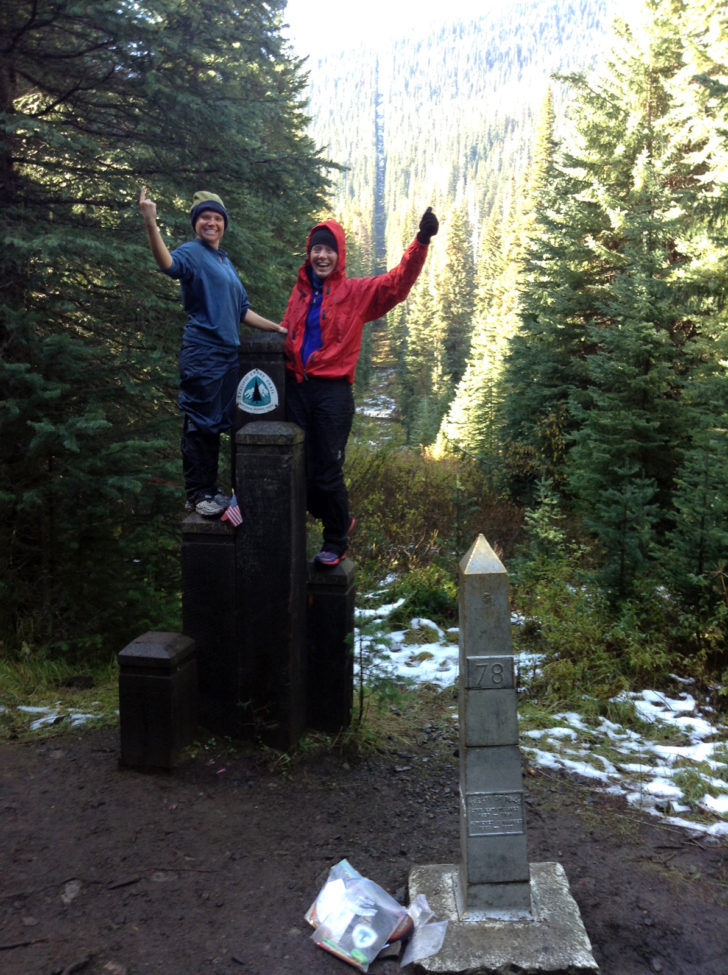 1:09pm October 6th – At the Northern Terminus of the PCT, triumphant! 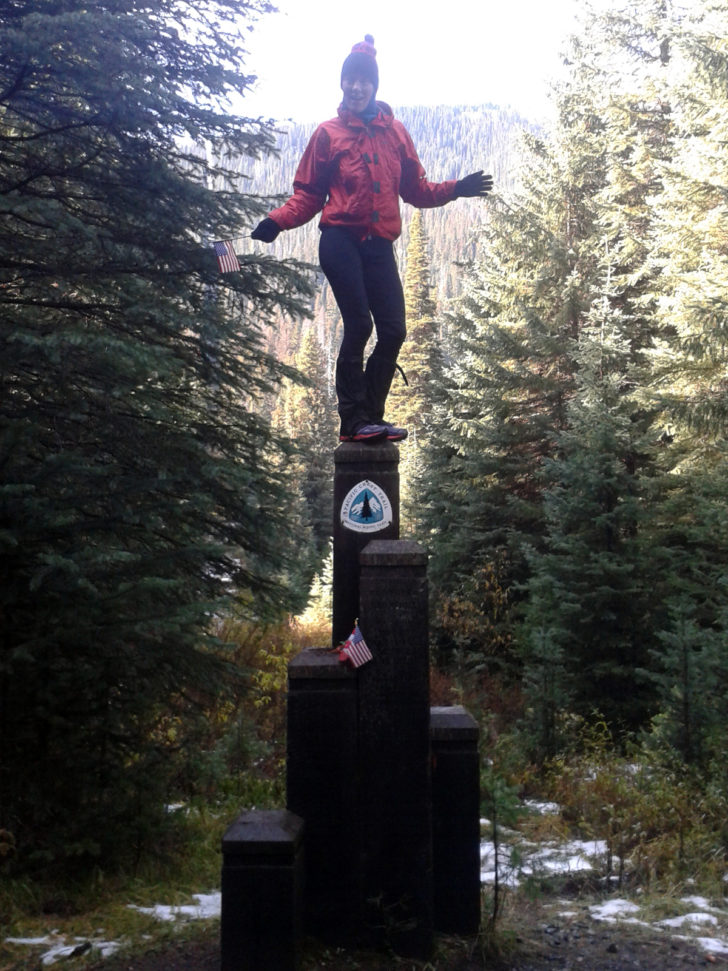 1:20pm On top of the monument, doing a little celebratory dance! 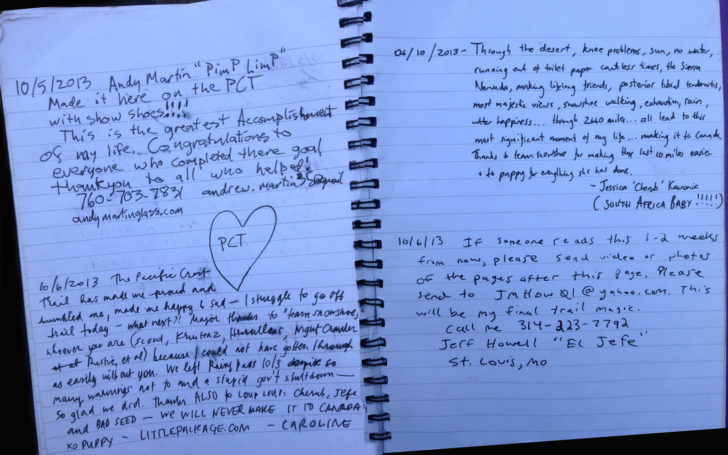 It has now been a little over a week since I left the PCT. I notice many of the other hikers that finished around the same time are also quiet and laying low. It is now time to reintegrate. I must go from living like a feral “woodswoman” to resuming my polite manners, from the simple purpose of walking a mountainous path to the choice-ridden bustle of city living. I find myself looking for groups of trees, any trees, looking at the tops of trees, at the clouds, looking closely at animals, staring at them, trying to extract the same feeling I got when I was deep in the woods. I can’t get the same feeling, but this feeling will have to do for now.

It’s a difficult transition that I think will be difficult for people to understand. If you have been in the woods for a long time alone, then returned to the city, I think you understand.

This hike was a mind-blowing, transformative experience and I feel like if I don’t emerge from it energized, repurposed, and ready for more adventure, I will have failed somehow.

So I need to start with some rest. Finally, after 173 days of walking.

For my wonderful supporters: I haven’t forgotten you! More soon!

* The US government shut down just 2 days before we departed. National Parks were closed. National Forests were open? Maybe, not sure. I was just glad nobody on our squad was stopped or arrested.

More photos from my entire PCT hike over at Instagram.